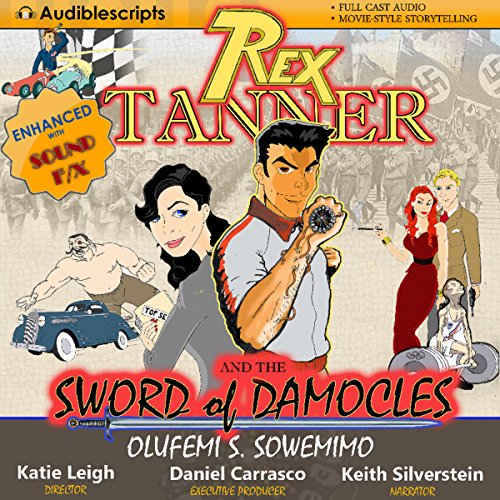 Rex Tanner and the Sword of Damocles

We meet Rex Tanner, race car driver, on a disastrous mission to save scientist Penelope Mulgrew in 1935. Rex effects their escape using the Omnidial, a mysterious device permanently grafted to his skin, which imbues Rex with temporary super powers...when it works.

Months later, Rex is approached with a new mission: American Olympians are turning up shriveled and weak, apparently drained of muscle. Rex, Penelope, and his pit man and sidekick Mikhail "Mick" Goldstein are asked to travel to the site of the Olympics to investigate. Though at first reluctant, upon learning that the British agency MI6 has been assigned to the same case, Rex enthusiastically accepts.

The brothers put aside their rivalry when an attack occurs at the party and another American Olympian is discovered emaciated. After an unsuccessful attempt to apprehend the villains responsible, Rex concedes that perhaps the mission is too big for one man and that he may need to team up with his brother, rather than compete with him.

Katie Leigh has voiced characters in many well-known and award winning animations over the years (My Little Pony, Adventures in Odyssey, Muppet Babies). Now Katie makes her directorial debut with this action-packed family adventure. Listen to Katie describe what it was like to direct for the first time in a bonus, behind-the-scenes interview included with the feature.

Production and Writing made this unlistenable

Better mixing, and better writing. It almost sounded like each part was recorded in a different area and then they did their best to mix it together and match the audio.

You ever download full cast audio drama podcasts?? It kind of sounds like that. It sounds a bit unpolished. I'm a huge fan of radio dramas but technical problems marred this for me.

Then there's the writing. I don't like a script being read to me. Read it to me in plain English or let the characters set the scene and describe the surroundings. It was tedious.

Would you ever listen to anything by Olufemi Sowemimo again?

Maybe,but I'm not sure. The mixing and production would have to be a bit better.

Well it's a full cast drama so you get the emotion and the sound effects that you wouldn't get.

I received this in exchange for an honest and unbiased review.

Rex Tanner and the Sword

Rex Tanner is a race car driver who is tasked with finding out who is literally sucking the life from Olympic athletes.Set in the 1930's with names reminiscent of old Speed Racer cartoons,this is a fun filled romp with sound effects galore and great narrations by: Keith Silverstein, Katie Leigh, Andrew S. Bates, Adam M. Drescher, Amy Robinson, Phil Lollar, Dave DeAndrea, Matilda Novak.While I enjoyed the story I find my mind drifts with too much extra noise,hence the 4 starts.If you like fast paced,spy,thrillers and are a teen,you will LOVE this audiobook!
"I was provided this audiobook at no charge by the author, publisher and/or narrator in exchange for an unbiased review via AudiobookBlast or MalarHouse dot com"

Rex Tanner is a race car driver, an American spy, a dude with an embedded gadget that gives him special abilities, and sometimes the hero. After saving the scientist Penelope Mulgrew, the two have a new mission. The 1935 Olympics draw nigh and something is stealing muscle strength from American athletes, leaving them depleted sad things. Plenty of shenanigans ensue as these two attempt to get to the bottom of this and save the Olympics for the Americans.

First, this book was a lot of fun. I quite enjoyed it. Rex is a fun hero to follow around. He has a bit of an ego and says some funny outrageous things. Penelope is a good foil for him, having to point out sexist remarks or such. It’s all done quite well with plenty of humor and action. In fact, this book reminded me of the TV cartoon series Archer (though Archer has more adult humor).

there’s plenty of gadgets and fun tech that makes me think of the older James Bond movies. Rex’s Omnidial, which is embedded in his flesh, is a source of usefulness and sometimes amusement. He doesn’t know what all the settings do and of course, Penelope, our scientist, wants to find out. Not all settings are conducive to all circumstances! Haha!

The bad guys are also interesting and they come in several flavors. Some are all-around jerks, others have their own agendas. Rex’s older brother shows up and there ensues sibling rivalry and male competition. The ladies play key roles on both side of the fence too. All around, this was an enjoyable tale fit for family fun. I am hoping for a sequel!

I received this audiobook from Audiblescripts (via the Audiobook Blast Newsletter) at no cost in exchange for an honest review.

The Narration: The sound effects, music, and narration for this book are all top notch. I enjoyed the full cast, especially those folks who had to pull off accents. Rex’s cocky voice was also excellent. The sound effects and music never drowned out the dialogue, and always added to the scenes.

Radio Drama for the 21st century

What did you love best about Rex Tanner and the Sword of Damocles?

The radio theater style story telling. It was over the top. It was great!

What other book might you compare Rex Tanner and the Sword of Damocles to and why?

The clear, across the board enthusiasm

This audiobook was provided by the author, narrator, or publisher at no cost in exchange for an unbiased review courtesy of AudiobookBlast dot com.

This was a really neat audio production with very professional and quality voice actors. I'm especially glad I was able to listen to it. I've not heard anything to liken it to. I found it a pleasant surprise. The sound effects were excellent as well as the cast. It was an overall suburb and fun listen.

Audiobook provided for an honest review.

My 11 year old son loved this book! He would have listened to the entire piece continuously if I would've let him. He is tough to please. We typically sample 3 or 4 before he finds one he likes. He was immediately hooked and wasn't disappointed with it, until he found out he'd have to wait for another to be published. Now I'm struggling to find something on par with this. The bar has been raised for him.