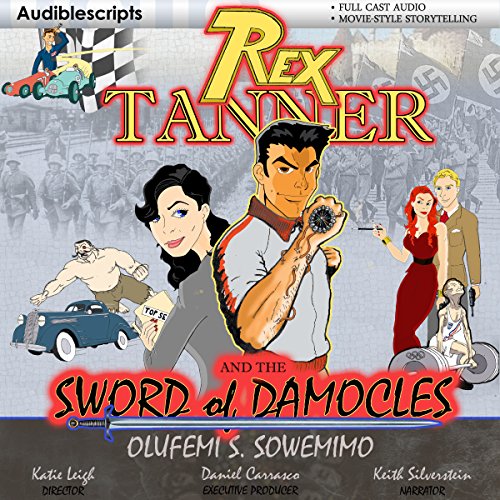 Rex Tanner: And the Sword of Damocles

We meet race car driver REX TANNER in 1935, after he’s been captured trying to save scientist PENELOPE MULGREW from the clutches of evil Nazi geneticist, DR. JACQUELINE HYDE. Rex affects their escape using the OMNIDIAL: a mysterious device permanently grafted to his skin, which imbues him with temporary super-powers…when it works.

Months later, Rex is approached again by his enigmatic employers with a new mission. Find out who is draining American Olympians of their muscle, leaving them shriveled up and weak. Rex travels to the Olympics in Berlin with Penelope and his trusty sidekick MIKHAIL "MICK" GOLDSTEIN.

Rex's bitterness is exacerbated when he discovers that his brother's new flame is MARIEL, Rex's first girlfriend. But, when an attack occurs at the party, and another American Olympian is discovered emaciated, the brothers put aside their rivalry. After an unsuccessful attempt to apprehend the villains, Rex concedes that perhaps the mission is too big for one man and that he may need to team up with his brother, rather than compete with him.

ABOUT THE DIRECTOR Katie Leigh has voiced characters in many well-known and award winning animations over the years (My Little Pony, Adventures in Odyssey, Muppet Babies). Now, Katie makes her directorial debut with this action-packed, family adventure. Listen to Katie describe what it was like to direct for the first time in the bonus behind-the-scenes interview included with the feature.

I enjoyed the story and look forward to hearing the others from the series. Each of the actors brought a unique presence to the story.

A thrill trip to the days gone by of great radio!

What did you love best about Rex Tanner: And the Sword of Damocles?

Reminiscent of former days when families gathered round to "watch the radio"! A professional production with perfectly cast voice talent bringing a well-written script to life - super hero style! Great balance of humor, excitement and mystery perfect for adults and older children alike. So grab the family and gather around the Ipad - you won't be disappointed.

Captured the right tone and emphasis as needed throughout the story without being distracting. Narrator become one of the characters.

What did you love best about Rex Tanner: And the Sword of Damocles?

Rex Tanner and the Sword of Damocles is a fast-moving, action adventure story with plenty of laughs. While a full-length adventure, it doesn't flag and is wonderful entertainment. The book/script is stylish and fun (and, while the plot itself is rather cheesy, that's really the point, as it is pastiche.

The performances are great - and the lead performance from the narrator Keith Silverstein is absolutely superb. His voice and narrative rhythm perfectly fit the material, and he gets the humour bang on. The other character voices, in this full-cast recording, are also enormous fun and make for some memorable characters.

So, in all, it was the full-on action and humour that I loved, and synchronicity of cast with writer & production team that led to a stylish, stylised piece - a real quality audio story.

The narration style is partially like an audio description for a movie - in the present tense. And the writer plays with that to undermine the more pompous or arrogant characters to great comic effect.

The action really doesn't stop. I particularly liked the mention early on (so hopefully not a spoiler!) that Rex Tanner doesn't actually know what all of his omnidial settings will do - or whether they will necessarily work, so there is always dramatic tension.

I loved, as mentioned above, Keith Silverstein's performance in every aspect. He had great driving energy as a narrator. But this was a production that made full use of the cast, and all of the characters gave superb performances, so it seems unfair to single any out. However, I particularly liked the comic timing between Rex Tanner (Andrew S Bates) in his sibling rivalry against Alexander Tanner.(Dick Lizzardo).

Want cheering up? Listen to it.
Want to feel like a kid again, listening to a tongue-in-cheek tale of silly adventure? Listen to it.

A terribly-written tag-line there, more advice than a proper advertising sentence for the show.

I was given a listen in return for an honest review. Also, to be honest, I am a fan of plot-driven adventure & humour, so I came to it as someone who would naturally quite enjoy this kind of thing. However, because of that I have also listened to/read stories in a similar genre and this did stand up with the best of them, particularly in its humour, so I would recommend it to people perhaps new to this genre.

Rex Tanner is the next big action hero

Would you consider the audio edition of Rex Tanner: And the Sword of Damocles to be better than the print version?

I haven't read the print version. But the audio book is a fun listen. Having a different voice for each character made the story more enjoyable. And there are plenty of hilarious moments and great lines from the actors. Alexander Tanner is one of the funniest characters I've heard in a long time.

What other book might you compare Rex Tanner: And the Sword of Damocles to and why?

Not sure which book I'd compare it too. But it did remind me of a few family films like Indiana Jones and The Rocketeer.

Keith Silverstein uses a light-hearted storytelling approach and sometimes gives you a wink as he breaks the 4th wall. But it works very well with the plot and keeps the story entertaining throughout.

I think it was somewhere in the 3rd Act where the weightlifter (sorry, I can't remember his name) at the Berlin Olympics had to try and complete his lift with the crowd jeering him. I got goosebumps after what happened at the end of that scene.

This is a good story to share with the whole family. It's simple and entertaining enough for kids, but compelling in a way that adults will find satisfying as well.

“Rex Tanner and the Sword of Damocles” is a multi-cast audio book that is fun and cheesy like a James Bond movie. The story centers on Rex Tanner, an American racecar driver in 1935. Rex is tasked with thwarting a Nazi plot to sabotage the 1936 Summer Olympics. Rex’s mission is to find out what (and who) is making American Olympians weak and losing muscle. Rex travels to the Olympics in Berlin with his trusty sidekick and a sexy scientist (I imagined Denise Richardson’s character Dr. Christmas Jones in one of the James Bond films).

In the James Bond vein, Rex uses a device that is affixed to his skin that usually provides him with temporary super powers. The story also includes an older, smarter and sexier British agent, who is none other than Rex’s brother. By the end of the story, the two brothers set aside their life-long sibling rivalry to catch the bad guys.

Although Keith Silverstein is listed as the narrator, this audio is an ensemble cast of actors lending their voices to the characters. Written in a screenplay manner, this story has multiple action-packed scenes packed into 2 ½ hours. I read somewhere that this recording is like "Iron Man meets The Rocketeer." I’m not sure I’d go that far, but the voice actors did a commendable job reflecting the proper amount of tone and emotion. As an added bonus at the conclusion of the story there is an interesting interview with Katie Leigh who directed this fun family adventure.

I definitely recommend this story, especially for a road trip with the whole family. I received a free copy of this audio book in exchange for my unbiased review.