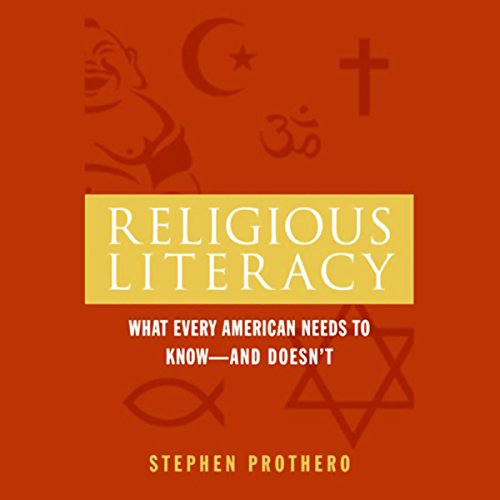 What's Your Religious Literacy IQ? Quick - can you:

If you can't, you're not alone. We are a religiously illiterate nation, yet despite this lack of knowledge, politicians continue to root public policy arguments in religious rhetoric whose meanings are missed or misinterpreted by the vast majority of Americans.

"We have a major civics education problem today," says religion scholar Stephen Prothero. He makes the provocative case that to remedy this, we should return to teaching religion in the public schools. Alongside "reading, writing, and arithmetic", religion ought to become the fourth "R" of American education, he says.

Many believe that America's descent into religious illiteracy was the doing of activist judges and secularists hell-bent on banishing religion from the public square. Prothero reveals that this is a profound misunderstanding. "In one of the great ironies of American religious history," says Prothero, "it was the nation's most fervent people of faith who steered us down the road to religious illiteracy. Just how that happened is one of the stories this audio has to tell."

Religious Literacy reveals what every American needs to know in order to confront the domestic and foreign challenges facing this country today.

"This book is a must-read not only for educators, clergy and government officials, but for all adults in a culture where, as Prothero puts it, 'faith without understanding is the standard' and 'religious ignorance is bliss'." (Publishers Weekly)

The people who are blasting this book for not being a primer on religion are being unfair for two reasons: 1) That is not what the book is - the author says so right up front and the publisher's notes say so as well. It is not their fault if some did not read their comments or chose to ignore them. 2) The last part of the book is a primer, although I would not purchase it for this purpose.

The book is divided into three parts. In the first he makes the case that Americans, while being devout, are also ignorant. It seems that they chose to enthusiastically follow the Bible without actually bothering to read it. He then goes into why it is not only bad religion but also bad civics. His argument is clear and convincing although somewhat repetitive.

The second section is a brief history of religion, mostly in the US, and how the clashes of the competing interests lead a formerly Bible reading people into religious ignorance. His argument is again convincing but this time not quite as clear. His conclusion that much of the ignorance has been caused by the religious leadership(s) is surprising but well supported. Again, he would have benefitted from more editorial over-sight.

The last section is a glossary of religious terms which was a useful review of some basic concepts even for someone who, at least according to his pre and post test, is already fairly religiously literate (but not at all devout - which would support his thesis).

It is an interesting read for people who want to learn ABOUT religion in the U.S. and how it has evolved (or devolved) overtime that should have been better editted. People who are looking for a spiritual guide or a Bible review should look elsewhere.

As a number of reviewers have noted, this book is heavily biased toward Christianity. The author's intention is clearly laid out, however. It's a book about us (American citizens) and how we've lost any real understanding of the degree to which Christianity has become part of our culture, our politics, our mythology, etc. It isn't a Christian tract.

The US-centric focus of the book is set squarely in the context of a larger plea for religious literacy in the broadest sense, and the author provides (in the dictionary-like section others have mentioned) a wonderful springboard to the search each of us should make to understand how religion has infused most cultures.

Don't be put off by reviewers carping about not being spoon-fed a religious literacy education. This book grounds you in what's necessary to understand political dialog in the US and can, if well used, start you/us/me on a path to a more respectable cross-religion literacy.

Despite being one of the most religious countries in the world, Americans know pitifully nothing about their religions. Not only do they not understand the tennents that they base their faith on, Americans don't know enough about other religions to understand world politics, enough about Christianity to understand political statements, our own history, or literary allusions (the entire time, I kept thinking about my college roommate who had to ask me (a Pagan) who Job is). He emphisizes, rightly, that the Supreme Court has, time and time again, reminded teachers that, while they cannot promote or preach religion, they are allowed to teach it.

While I agree completely with Prothero's dismaying statements about the woeful lack of understanding of the various religions out there, I don't view his solution as practical. Having a full year of religion education (one semester of the Bible, one semester of world religions) would be great, except for the fact that he glosses over the lack of time, funding, or ability to teach it properly. If religion is taught in classrooms, I am not afraid that all teachers will suddenly start prosletysing to students. I am afraid that all the interest and intrigue will be yanked out of religious study the same way it has been squeezed from the study of history in high schools (see Lies My Teacher Told Me)-or literature, or math, or evolution, or any other topic that is so facinating and important that gets the guts ripped out or gets taught to the lowest intellegence level in the classroom.

The basic premise of the book is good enough: Religion has a significant impact on our culture and so to effectively participate individuals should have a functional understanding of religion.

It takes well over 2/3 of the book to say that.

He leaves little time to explore religions. When he gets down to his core religious literacy facts (or as another reviewer puts it so well “factoids”) they are presented in alphabetic order. So one gets little if any of overview of a religion in context of itself let alone other religions.

I think the two prior reviews make outstanding points: Author seems to have all the dots but can't connect them. If you want to learn more about religion, do not get this book.

After the authors appearance on the Daily Show, my daughter and I were excited to read and discuss this book. I found it sufficiently disappointing that I could not recommend she spend the time to listening to it. I can’t recommend anyone else do so either.

This book will do very little, if anything to improve your religious literacy. It may, however, inspire you to pray for a quick end to the book.

As was the case with the previous reviewer, I saw the author on 'The Daily Show' and I was anxious to get the book to help improve my religous knowledge. I was somewhat surprised to learn from the show that American ambassadors are not required to have any training on the major religions of countries with which they interface. The author made a great argument for improving religous literacy on a broad scale.

Unfortunately, the book is not focused on enlightening readers about world religions, but is instead devoted primarily to proving how little Americans know about them. I don't think that there are many who would disagree with him on that point. The subject certainly could have been adressed as effectively in a pamphlet as in a book.

Mabye he'll next write a book on urban traffic congestion that spends the first two-thirds of the book explaining how there are too many cars and too few roads.

After reading this book, you will know very little about the world's religions. The author repeats his case over and over about how ignorant Americans are about other religions with the implication that he is brilliant by comparison. It reminds of the useless graduate student discussions from college that resulted in very little actual learning and certainly no action to improve things. Bottom line, do not buy this book. It is a waste of time and money.

A Waste of Time and Money

With such a lofty claim on its front, my expectations were high for this book. It was a massive let-down. Prothero offers some interesting information, but the entire book could be fit into one chapter. The appendix was the most useful part. He takes pleasure in hearing himself say the same thing over and over again while leading listeners astray who think that this really is what the religiously-illiterate American needs to know. The US is starved of religious literacy, but please don't waste your time and money trying to go about educating yourself this way.
Search: "Cultural Literacy for Religion: Everything the Well-Educated Person Should Know," a Great Courses series addressing the same topic. It's not perfect, but does better with living up to its name. It is actually worth your time and still one credit.
If you've already bought this book, return it while you still can.

Enjoyed the the audio book

Learning is not the filling of a pail its the lighting of a fire - forget who wrote that but the author essentially advocates for filling the pail of all American students with a bunch of religious factoids. Ultimately the deeper conflicts and differences in practice and theory between religions is the thing most likely to light a fire, even post 911. The notion that our secular public schools are a forum for such debates is laughable. Why adding another item to the already brimful of nonsense pails of kids who by worldwide standards can barely read or write, well... just another northeastern blowhard academic.

Author seems to have all the dots but can't connect them. Science, history, and bad acts of religious institutions have eroded the influence of historically "legitimate" religions. The literature, the institutions, all have been underattack for years but yet we Americans can put reason aside and worship at the altar of faith in one Abrahamic God. Yet this knucklehead would have you believe that these people's faith is somehow less legitimate because they don't know their religions institutional factoids. Many of these factoids have been discredited but this gentleman would like to fill your child's head with this dribble. The faithful Americans he disdains as religiously illiterate are compared to the Europeans who don't believe but whose heads are filled with religious factoids. One can only imagine he hopes to see these zealous Americans be converted into secular Europeans. No such luck, the faithful Americans have got it right. Despite the evidence of science, history, and track record of religious institutional failures, not one has refuted the existance of the one Abrahamic God, but it takes faith not factoids.

I have to say after listening to this audio book left me wanting more. If you want to learn more about religion, do not get this book. The author knows his stuff but keeps the good points to himself.