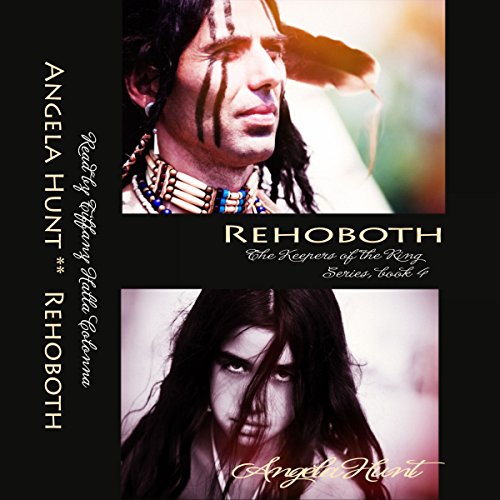 A brother and sister search for each other after being separated by an Indian prince and his war. Gifted novelist Angela Elwell Hunt continues her exciting American historical Keepers of the Ring series.

In book four, Rehoboth, Daniel Bailie takes his children, Mojag and Aiyana, to minister to the praying Indians. Mojag, however, abandons his father's ministry, feeling that he's been led to serve the heathen Indians, who are on the brink of war with the colonists. Travel back to an amazing period in America's past and experience the people and ideas that shaped the founding of our nation.

the story really was quite excellent. I didn't enjoy the performance as much as in the previous books in the series. it sounded at times as if the voice suddenly changed into an automated computer generated voice. the performance was a bit awkward sounding.

This book was a mixed bag. So let me separate the good from the bad.

While I have a great respect for the work that goes into narration, this speaker simply whined through the entire story in a pleading voice that made it extremely difficult to get through the book. Candidly, the only reason why I subjected myself to the "misery" was because the story was so good.

This is a story of early New England, specifically Massachusetts settlements, and how the English dealt with warring native American Indian tribes while trying to settle the land and convert as many Indians into "praying men" and "praying villages" as possible. Yes, there are a few love stories here with lines that might warrant a whining, pleading presentation, but certainly not the entire volume.

Interestingly, the drone of the narrator continues even when the text identifies a specific tone of voice that conflicts with the narration. For example, the text might make a statement followed with, "as he said in anger," or "as she said sternly," but those cues were ignored, being replaced with the same pleading, whining tone.

On the whole, the story was superb. Angela Hunt is an excellent writer, and her books are well researched. However, the drone of the narrator made this "read" very, very painful.

I would recommend with the caveat that the reader prepare for a subpar narration of the text.

This book was a little harder for me to follow, then some of her other books. still a good read. Just a little slow at times.

I liked the spiritual depth to the characters. I also liked the contrast of cultures.

Good blend of coming of age and historical fiction

Have you listened to any of Tiffany Halla Colonna’s other performances before? How does this one compare?

I bought this because I really liked this narrator's performance of another title. But I really struggled with the story. There were too many characters for me to keep straight and at some points I got confused about how they fit into the story because there would be so many scenes in between when a main character appeared and by then I had forgotten things I needed to recall to remain in the story.

It might be entirely my fault I struggled with some aspects of the story because this is a series and I entered it here with this book. So while this was a DNF for me I still did enjoy the narrator. She's easy to listen to and can make the character voices distinct enough I get to know them by their voices, which I like in my audiobooks.

The narration and the female lead both drove me to leave the book behind several times. The female lead reminded me of a spoiled self centered brat. The narrators narration only added to me coming to that conclusion.

My thoughts RE: This series by Angela Hunt

The story was beautiful. However the performance of it is flawed by whining. A sorrowful voice for sorrowful events and emotions is very well, but it began to seem the performer only had a continual whine. So sorry. The flawless historical research notwithstanding this series was spoiled for me by the performance.

I enjoyed the historical aspect

The narrator was a huge disappointment. I got so tired of the whining, vibrato of those who were emotional.