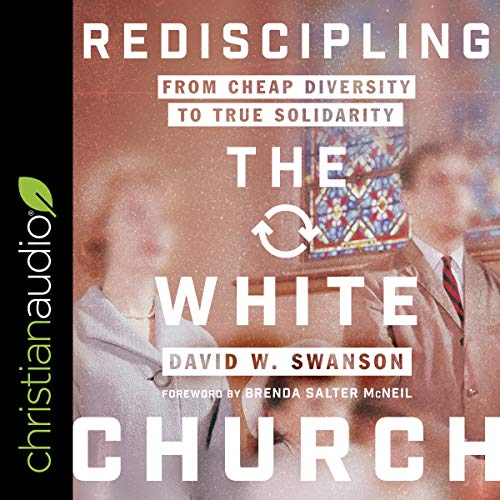 "Many white Christians across America are waking up to the fact that something is seriously wrong - but often this is where we get stuck."

Confronted by the deep-rooted racial injustice in our society, many white Christians instinctively scramble to add diversity to their churches and ministries. But is diversity really the answer to the widespread racial dysfunction we see in the church?

In this simple but powerful book, Pastor David Swanson contends that discipleship, not diversity, lies at the heart of our white churches' racial brokenness. Before white churches can pursue diversity, he argues, we must first take steps to address the faulty discipleship that has led to our segregation in the first place. Drawing on the work of philosopher James K. A. Smith and others, Swanson proposes that we rethink our churches' habits, or liturgies, and imagine together holistic, communal discipleship practices that can reform us as members of Christ's diverse body.

David Swanson’s main focus in Rediscipling the White Church is discipleship, not evangelism. Somewhat similar to my own interested in racial justice and spiritual direction (a method of discipleship) evolving in parallel, Swanson is emphasizing that the way to correct a distorted church is an emphasis on correct discipleship.

Swanson is building on the work of Dallas Williard, James KA Smith, and others that remind us that discipleship is not about intellectual knowledge acquisition, but building habits.

"Building on Augustine’s understanding of people as desiring creatures, philosopher James K. A. Smith writes that it’s our habits that “incline us to act in certain ways without having to kick into a mode of reflection.”7 Remember my implicit bias at the beginning of the chapter? Because we are not first and foremost thinking beings who rationally engage with every encounter, it is our habits which shape our imaginations or, in Augustine’s vocabulary, our loves. My unconscious assumption about who wrecked my cement was inculcated in me through a set of racially oriented habits. We aren’t usually aware of our habits."

The central point of the book is that Swanson wants to transform the goal of discipleship around racial justice is solidarity (regardless of how visually diverse a congregation is) and not some abstracted racial reconciliation or unity.

"Of all the ways we have been damaged by whiteness, I believe the most significant is the chasm we have opened between ourselves and people of color, other image-bearers of the living God. Rather than listening to our neighbors’ stories of the harm inflicted on their communities by race, we often explain away their experiences. We appeal to our own racial enlightenment as proof that we are not racists and thus bear no responsibility for the harm done to our neighbors by a racialized society. Worse, sometimes we don’t even believe our neighbors and friends of color when they explain what it’s like to live beyond the boundaries of whiteness. “There is a long history,” writes Drew G. I. Hart, “going all the way back to slavery, of white Americans not trusting black perspectives as truthful.” The regularity with which white conversation partners dismiss what I share about the experiences of my friends of color is one indication of the distrust sown by whiteness."

After I was about 20-30 percent in, I stopped and flipped to the notes and started reading his list of citations (and then his suggested further reading list in the back). I have not read every book he cites, but I have read most of them, and many of those that I haven’t read are on my to-read list and/or I am familiar with them. I have been reluctant to pick up Rediscipling the White church. There are several reasons for this, including some mistrust of White people that write and lead on racial issues, desire to primarily read Black and other racial minorities on racial matters, and likely some self-righteousness about thinking I wouldn’t get much from Swanson.

Two biographical details, I think, help explain some of Swanson’s openness to racial issues. One, he is a White adoptive parent of Black children. Every group that I am in that has a significant presence of white people talking about race has a disproportionally high percent of White people who are adoptive parents of minority children or who are in interracial relationships. Racial issues become more salient because of their relational proximity. The second biographical detail that matters is that he was a missionary kid. Missionary kids, who can broadly be counted as third culture kids (children who are not entirely in the culture of their parents or their community and so are a ‘third’ culture), have a greater ability as adults to move between cultures because of the early exposure to a variety of cultures.

As I read, I confronted my skepticism of Swanson’s work. He is recommended and vouched for by people I trust. I used to live in the community where he lives and ministers now, and so I have some relationship and identification there. My skepticism is, in part, skepticism of my work in racial issues. We have read much of the same stuff. We are similar ages. Our paths diverged in details (he started as suburban and moved to the city, I started in the city and moved to the suburbs in my 30s). So my skepticism is likely as much about being skeptical about myself as it is about him. I am going to continue to be unsure both about Swanson and myself because there is no end here. Part of the reality of discipleship is that the goal is becoming like Christ, which means it is a project that will not have a final endpoint.

Rediscipling the White church helped make some of my thoughts more concrete. The practical steps at the end about reimagining the practice of evangelism, I think, were constructive, and I agree with them. These include making a long term commitment to place, to seek out areas where we experience mutuality with neighbors, be together with people, and imitate the Black church’s resistance to splitting evangelism and justice. Swanson designed the book as an introduction and a starting point to point readers in a long term direction. The annotated reading list at the end is a start to help move people toward racial justice.

This book opens doors to a new generation of thought leaders that are tackling issues of racism. David Swanson provides a new vision of how discipleship should be applied in the White Christian church. With that, the needle is pushed forward in the fight for progress in the US.

Rollercoaster of a ride!

Took me through a range of thoughts and understanding about being a white Christian. Exhilarating at times and other times challenging to hear. Great use of scripture and discipleship to help us white Christians navigate our journey from cheap diversity to deep solidarity. Also introduced me to authors of color I might have missed.