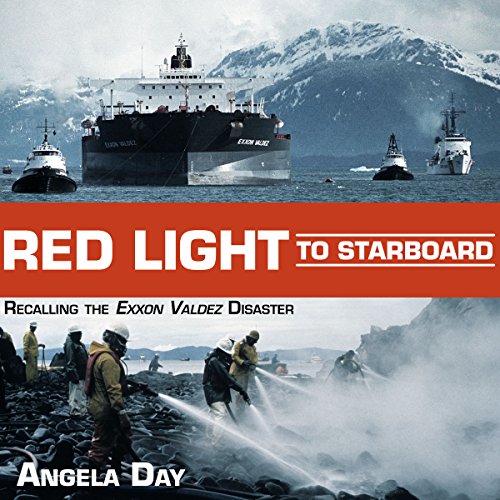 Minutes before supertanker Exxon Valdez ran aground on Bligh Reef, before rocks ripped a huge hole in her hull and a geyser of crude oil darkened the pristine waters of Prince William Sound, the ship's lookout burst through the chart room door. "That light, sir, it's still on the starboard side. It should be to port, sir." Her frantic words were merely the last in a litany of futile warnings.

A parade of promises began the next day. Exxon Shipping Company president Frank Iarossi declared, "If it is a claim that is associated with the spill, we've assumed full financial responsibility." A week later, Alaska Governor Steve Cowper spoke at the Valdez Civic Center. "We don't want anybody to think that they have to hire a lawyer and go into federal court and sue the largest corporation in America...The state of Alaska represents you. And we want to be sure that...people who are damaged by this, get compensated fairy and quickly." He also indicated that the state would see to it Prince William Sound was cleaned up, regardless of the cost.

Lengthy investigations revealed cover ups, covert operations, reckless corporate management, numerous safety violations, and a broken regulatory process. At the time of the spill, oil flowed through the Alyeska pipeline at a profit of $400,000 per hour, yet in the end, the 10,000 fishermen affected by the spill spent nearly 20 years in litigation and received little compensation for their losses. Despite a massive cleanup effort, oil remains on the beaches and continues to impact marine life.

Red Light to Starboard documents a story that stunned the world, recounting regional and national events. The compelling narrative explains how an industry often seen as greedy came to be entrusted with a spectacular, fragile ecosystem, and discusses the governmental and public policy decisions that contributed to the disaster, as well as personal and environmental consequences. It also follows policy steps taken since the spill and through opportunities for citizen input and oversight, offers hope for preventing future disasters.

It is was an engrossing read/lisen.

The book did an excellent job of personalizing the Valdez Oil Spill, while at the same time illustrating the scale of the disaster. While most may think this spill happened in Alaska, the entire US felt it and the legal ramifications from it. This book fully illustrated all of that.

Sure, everyone knows, but...

Even though everyone knows about the Valdez accident, this is still a very good read with great narration. Many good details. Funny that the story deals almost-zero with the title though.

The Exxon Valdez spill in affected many lives. In Red Light to Starboard we get a look at Bobby Day. Bobby was a fisherman who loved Alaska and fishing. When the spill took place Bobby was on top of his game. We also get a look into how Exxon employees had mad a few mistakes that ended up adversely affecting the ecosystem of Prince William Sound. Between the massive amounts of oil, and the oil cleaning process the Sound changed. Many fishermen were losing out on what used to be a plentiful abundance of Salmon and Herring. The years following of court cases against Exxon still left many people having to find a new way of life. Bobby Day was one of those people.

What was one of the most memorable moments of Red Light to Starboard?

It was a fascinating read into the Exxon Valdez disaster, with great researched viewpoints and information that you may not have known.

I absolutely loved this story, and Chris Abell did an outstanding job narrating the story in his clear, compelling, and engaging voice.

Red Light to Starboard tells the story of Big Oil coming to Alaska, the friction between the oil companies, the greater US economy, the Alaskan natives who would benefit from the boost to the economy, and the native fishermen who fished in the rivers nearby.

All of this is told through the lens of Bobby Day, a local fisherman whose entire life is enmeshed in Alaskan and fisherman culture. This is the portrayal of what it was like to live that culture, then to have it turned upside down by big oil companies.

What really made this book stand out is that it wasn't simply a tirade against oil drilling in Alaska. I don't even think you could make a blanket statement and say that the author is against oil drilling. It's much more nuanced than that. More accurately, I would say the author is against lying, shirking responsibility, gross and willful negligence, collusion, and disregard for promises.

The tragedy of the Exxon Valdez wasn't oil drilling in Alaska. Oil drilling in Alaska provided many wonderful benefits to both locals and the broader country. The tragedy of the Exxon Valdez was that numerous warnings were swept under the rug, proper precautions weren't taken, and then after the spill, the proper parties didn't take responsibility.

I knew absolutely nothing about the incident before reading this book, but the author wrote clearly and that made it very easy to grasp what was going on. Very enjoyable!

I was voluntarily provided this review copy at no charge by the author, publisher and or narrator.

A very interesting in depth look at the Exxon Valdez environmental disaster. I didn't really know anything about what happened so this was fascinating for me. Very well done.

Loved the narrator. Perfect for this book.

This audiobook was provided by the author, narrator, or publisher at no cost in exchange for an unbiased review.

Everything you didn't know about Exxon Valdez

Would you listen to Red Light to Starboard again? Why?

Yes. This book is laden with lots of great information. While I understood the sotry perfectly, I believe hearing it again would help solidfy the histoy prior to the spill.

What other book might you compare Red Light to Starboard to and why?

Not sure that there is anything comparable to it.

There is a scene where Bobby sees an otter after the spill and it is crying. That scene helps to remind us how devastating this spill was to our ecosystem.

How far does corporate America go to side step blame?

I was given a copy of this audio book by Audiobook Boom in exchange for an honest review. This is one of the few audiobooks that I talked about with my husband, my kids, my mom. I looked up movies about it. I was said when it was over.

Parts were interesting, some were a little boring.

What was most disappointing about Angela Day’s story?

Would have liked more drama in the story as it was a very dramatic event.

Did Red Light to Starboard inspire you to do anything?

Be more aware of the environment around you.

"I was voluntarily provided this review copy at no charge by the author, publisher and or narrator.”

This was a little outside my normal tastes as far as audiobooks go, but I think most people would be able to enjoy this and, without a doubt in my mind, learn a thing or two (or fifty).

This book was a prime demonstration of excellent research. The resources found, interviews conducted, transcripts and articles recovered, and the volume of information and data the author managed to uncover were more than just impressive. However, it takes more than just good research to make a good book like this. The author didn't just present his research in the form of a book, he also managed to use his writing abilities to turn the research into a well-presented story. I enjoyed listening to this book as much as I have enjoyed listening to some fiction stories and managed to learn more about a variety of topics along the way.

While all of us know about the Exxon Valdez to some degree, I only had a secondary knowledge of it (I was very young when it happened). Not only did I learn more about this particular disaster, I think that most readers will gain a valuable insight into the political process, bureaucracy, corporate greed, passing legislation, maritime safety, and a whole host of topics. This book could be used in a number of masters degree courses from safety science to crisis management to public administration.

The narration was also above average with good pace and tone.

I received a free copy of this audiobook from the author, publisher, or narrator in exchange for an unbiased review. I was NOT required to write a positive review and this reflects my honest opinion of the work.