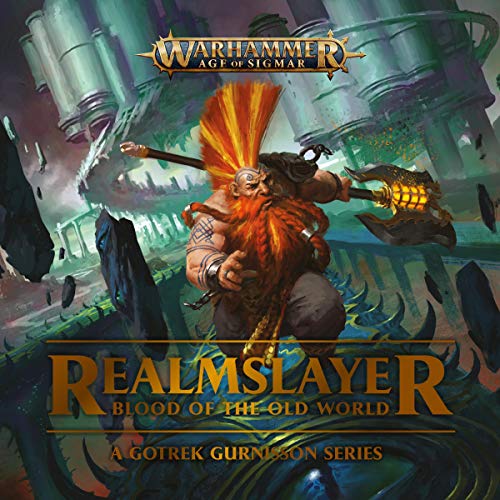 Realmslayer: Blood of the Old World

In the strange worlds of the Mortal Realms, Gotrek Gurnisson craves one thing above all: purpose. When he discovers a being who might lead him to it, he will stop at nothing to find them - but old enemies seek the same prize....

Listen to it because:

Gotrek's adventures in the Mortal Realms continue, written once again by David Guymer, with an all-star cast - headed by Brian Blessed! Say it with us: Gotrek's alive!

Gotrek Gurnisson was once the greatest Slayer of the Old World, meeting his doom in the great cataclysms of the End Times. The heroic duardin stepped forth into the Realm of Chaos to fight the daemons gnawing at the world's ending and satisfy his death oath, leaving behind his companion Felix Jaeger. Now, he finds himself in a strange new realm where gods walk the earth and dark forces are ascendant.

Within the endless forests of Ghyran, Gotrek learns of a being with the power to guide him to what he craves above all else: a destiny, and a purpose worthy of his legend. What he seeks is a prize more terrible than any he could have imagined, fought over since the dawn of time by powers beyond even his indomitable strength. Nor is he the only scion of the Old World to be drawn by its promise, and Gotrek will have to overcome the greatest nemesis of his past if he is to claim his future.

IS THIS THE BEST YOU'VE GOT?!

Yes, yes it is and it's a great listen for anyone who is a fan of the series.

Amazing continuation of my favorite story

G&F was an epic adventure and these continuation are spot on. got me to cry. can't wait for more.

loved it, Brian Blessed is an amazing voice actor and a pleasure to listen to.

as long as they keep making Gotrek books I'll keep reading them. I always enjoyed them. hope they bring back Felix though not a fan of the aelf

Amazing ! Breath Taking! Any Slayer will tell you !!

Such an amazing journey I’ve had with this series and Guymer is the icing on the cake in this epic. I best not say more to spoil anything.. so stop what your doing and lose yourself in this awesome tale!

The story keeps me wanting more and more. I cant wait for the next one and to see what adventures we are taken on!

I think I just cried a little

sad. but good. ending. and a new beginning. But I look forward to more. Gotrek lives!!

gotrek is back in almost full fighting form

Gotrek returns to the Warhammer worlds, he's going to let everybody know about it whether they like it or not. voice cast is amazing, Brian blessed really sells it, supporting actors barely feel like supporting actors

The audio drama format makes it hard to follow

I enjoyed it, it's Gotrek being Gotrek and it's performed very well (Brian Blessed is great) but I frankly dislike the audio drama format, or perhaps just how this one was written since I had no trouble with the Realmslayer AD. stuff just kind of happens and you can only tell something is happening by the yelling and sounds of fighting. A bit hard to follow along with and it's making it much harder to enjoy for me than the other Gotrek novels.

A demand for Games Workshop.

I wanted to hear Brian Blessed play a barbarian

I know nothing about the Warhammer Universe and I went into this completely blind. Why? Because the idea of Brian Blessed playing a dwarf barbarian is perfect to me. As such, I really got what I wanted - if you are looking for fun fantasy one-liners, good production value and Brian Blessed interacting with a fun group of party members while occasionally screaming a battlecry, this is certainly for you. As for the story: I can't really tell. It is at the same time too simple (Go to place, fight the thing) and too complicated (I have no idea where we are and who these characters are). So if you want to understand the entire story, I cannot recommend just diving in line I did.

Brian is a blessing

Brian Blessed is a great voice for Gotrek Gurnison. I was so fund of listening to him in Realmslayer, but he even topped it in this part again. This audio book and their actors are doing a great job to bring Gotreks journey alive in this new age. I am looking so forward to the next part of the Sla....Fireslayers journey :)