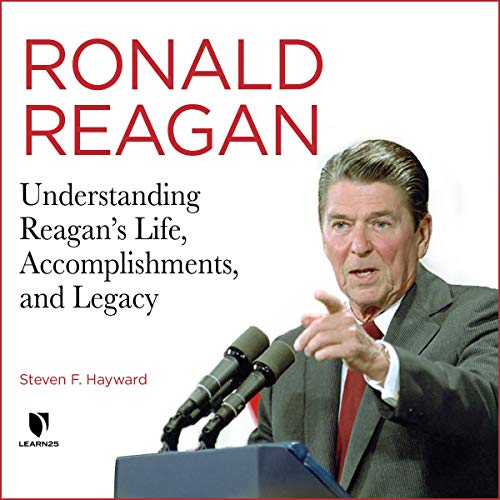 Follow the life and legacy of Ronald Reagan in this course by his acclaimed biographer Dr. Steven F. Hayward.

Dr. Hayward is an accomplished scholar and conservative public intellectual who has taught and held fellowships at Georgetown University, UC Berkeley, and the American Enterprise. He is also the author of the celebrated two-part biography The Age of Reagan, which Reagan adviser William Niskanen called "the best history of the Reagan presidency."

In Reagan: The Man and His Legacy, Dr. Hayward combines an engaging teaching style with his deep knowledge of Reagan's life. The result is a fascinating portrait of a poor boy from Illinois who became a Hollywood movie star, eloquent speaker, and one of the greatest presidents of the United States.

Reagan has taken his place alongside Franklin Roosevelt as one of the most consequential president of the 20th century, and as the dominant influence in the modern Republican Party. Dr. Hayward's passionate lectures reveal the breadth of Reagan's accomplishments and character strengths: his landmark meetings with Mikhail Gorbachev that led to the end of the Cold War, and his dedication to the rights of the individual that left an indelible mark on our national and local governments.

Enjoy this inspiring 12-lecture course in your home or car today.