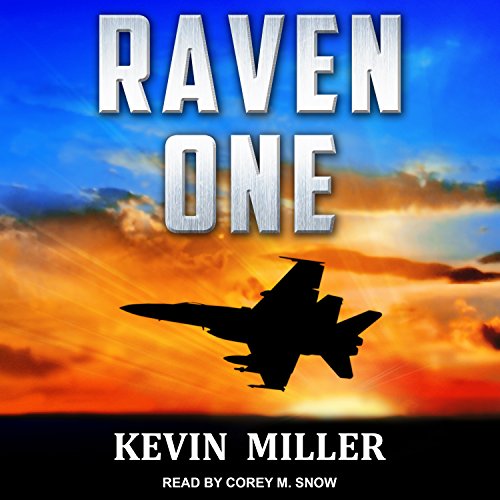 For a moment Wilson froze and looked at the white-helmeted pilot who sat high on the nose of the colossal fighter. Across the small void, he saw the pilot's eyes peer over his mask. Dark, chilling eyes. Wilson kicked right rudder to slide closer and jam any chance for a bandit gunshot. When the bandit pulled all the way over, almost on its back but in control, he cursed in frustration at what he knew was coming next. The hostile fighter reversed over the top in a negative-g maneuver, his nose tracking down on Wilson like a falling sledgehammer in slow motion. Horrified, Wilson realized he faced an imminent snapshot. With the little air speed he had, he inverted his Hornet to avoid the attack. His aircraft still rolling, Wilson saw that the monster had another weapon at its disposal.

I listened to this book in its entirety and it genuinely made my commutes to work the highlight of the day. It is very well performed and written, crafted very well for the military thriller market. That is to say, do not expect to be reading the greatest thing ever written ever, just extremely good by military fiction standards.

The scenarios are grounded in reality, and while at the edge of plausible sometime, are not outside the realm of possibility. There are many low-rent military thrillers out there that you could waste your time with. Captain Miller's books here, especially this one, out-classes all of them.

The story takes places around the Persian Gulf, showing all sides from command, to the pilots, to the opponents. There is enough characterization and emotional investment that the events of the story have an impact, but it does not shy away from the hard military enthusiast details.

That said, it is very much technical in that aspect, as the happenings with F/A-18s and other aircraft are declared with stunning accuracy and detail. But it would read as a long string of acronyms or techno-aviation jargon for those uninitiated. To really dig into this book, you should be probably have some knowledge of military aviation.

To hear a voice actor paraphrase and use onomatopoeia imitating the bleeps and jingles inside a cockpit is something to behold, and done very well.

In closing, this is a great listen and a great book - For those into military aviation fiction. Fully recommended, if that is your area of interest.

This was an excellent book. Both the story and audio performance was 5 star. As a Naval Aviator the depictions of squadron life left me with viseral feelings and we're exceptionally authentic. The combat is well edited and all very plausible. Highly recommend.

Being on an aircraft carrier in 1993-95 in the gulf this book was like reliving my time onboard. I loved every bit of it and could almost smell the jet exhaust. Well done and excited for a 3 book series!!!

Thoroughly enjoyed this book. Unfortunately, there were times I had to rewind and relisten to certain parts because I got lost in the midst of overwhelming naval jargon. As an former army guy, who spent time working with the navy, it brought back some memories - both good and bad. The story is engaging as he weaves just the right amount of action to keep my interest and now I find I want to know more about Lt Cdr Wilson - so I guess I'm buying the next book in the series.

Even 5 stars does not do this book justice. If you are a navy veteran, especially if you have served on board ship as you listen close your eyes and you are instantly back on board, and immersed the story. I am on to the next in the series.

Not worth listing to. There is very little action

Worst book I have read this year. Save your credit and watch the grass grow instead,

I enjoyed this book very much. it had a good balance of combat and Navy fighter pilot life aboard an aircraft carrier.

Kevin's knowledge of naval aviation is shared in a way that both combat veterans can relate to and the common non military person can enjoy. nice work!

Great series and plot moves along nicely. A lot of great real world details that adds to the immersion. I appreciate a book that you learn some interesting things as well.

The characters were well developed, the audio performance was on point, and the combat scenes were gold.

One of the best pilot novels I know of

Great insight on the live of a naval aviator! You get the tense feeling of being in the cockpit yourself.

Raven One both entertaining and informative

After having watched with interest some of the contributions of Capt. Miller on Youtube (ao Ward Carroll channel) and having enjoyed the ‘Raven One’ campaign on DCS it was time to finally check out the book. Although categorized as fiction the storyline provides besides entertainment adequate SME details to give it credibility to the level that it could have happened. Having more details and context about the ‘Ravens’ I am about to start with the latest and challenging DCS Raven campaign, called ‘Dominant Fury’, as well as checking out the other books that Capt. Miller has written.