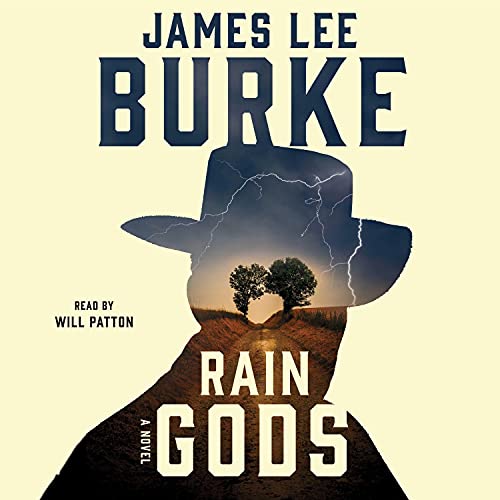 When Hackberry Holland became sheriff of a tiny Texas town near the Mexican border, he'd hoped to leave certain things behind: his checkered reputation, his haunted dreams, and his obsessive memories of the good life with his late wife, Rie. But the discovery of the bodies of nine illegal aliens, machine-gunned to death and buried in a shallow grave behind a church, soon makes it clear that he won't escape so easily.

As Hack and Deputy Sheriff Pam Tibbs attempt to untangle the threads of this complex and grisly case, a damaged young Iraq veteran, Pete Flores, and his girlfriend, Vikki Gaddis, are running for their lives, hoping to outwit the bloodthirsty criminals who want to kill Pete for his involvement in the murders. The only trouble is, Pete doesn't know who he's running from: drunk and terrified, he fled the scene of the crime when the shooting began. And there's a long list of people who want Pete and Vikki dead: crime boss Hugo Cistranos, who hired Pete for the operation; Nick Dolan, a strip club owner and small-time gangster with revenge on his mind; and a mysterious God-fearing serial-killer-for-hire known as Preacher Jack Collins, with enigmatic motives of his own.

With the FBI, Immigration and Customs Enforcement, and a host of cold-blooded killers on Pete and Vikki's trail, it's up to Sheriff Holland to find them first and figure out who's behind the mass murder before anyone else ends up dead. In this thrilling and intricate work, James Lee Burke has once again proven himself a master storyteller and a perceptive chronicler of the darkest corners of the human heart.

The best writer teams up with the best narrator for an enjoyable audio book. This book is similar to No Country For Old Men. Just similar but a very different story and it is better in several ways. For one it is twice as long so you get twice as much enjoyment. Two there are some nice characters in this book. Sheriff Hackberry Holland for one but every time they said his name I thought Huckleberry Hound and chuckled. Strange name. Will Patton does a super job as usual and I only wish he could go back and read all Burke's books. There are many of them but they are useless to me with other narrators. Pretty convoluted and fast paced. Worth a credit.

This book and the narration are so good that they almost deserve a class of their own. As another reviewer noted this story does bear a passing resemblance to No Country for Old Men, so if you liked that movie that's likely a good indicator for this book. I'm not a huge fan of Burke, I find his Louisiana novels (much like True Blood on HBO) a little hard to take, but this Texas badlands story is simply a masterpiece. The narration is spectacular, it's a little disconcerting that the lead villain sounds exactly like George W Bush, but it's hard to imagine how it could be improved upon. The story is complex with many interwoven threads so you need to be able to give the story your reasonably full attention to really appreciate the mastery of plot and language deployed here. The chief bad guy (W.) may be the best drawn and most complex literary monster since Hannibal Lector. The hero is grittier than a sandwich eaten at the beach, the cavalcade of supporting cast have such a comprehensive range of character flaws and challenges that it does get a bit Dostoyevsky grim from time to time, but never ceases to enthrall.

Only a master writer can leave you rocking on a see-saw between grinding your teeth over the moral imbeciles and cheering for the women of courage and backbone in this book. You think you'd hate these guys, but Burke finds and shows you just enough of their humanity that you understand the main characters.

Take your time and enjoy the pictures painted because you're going to be right there, smelling and tasting the Texas days and nights. This author gets under your skin with the characters; he doesn't tell you through trite phrases and meaningless gestures.

No highbrow literature here. Just a fine story, skillfully told. If you haven't read James Lee Burke before jump right in. If you have, you'll feel right at home. The narrator is like a fine barbecue, slow and low so the story is so tender it falls off the bone.

Will Patton deserves an Oscar...

I agree with Richard. Let Will Patton go back and record all the Dave books. It would be a great literary event to start with Heaven's Prisoners and follow Dave through his life. After hearing Patton's first reading of Burke's books years ago, I just can't listen to another reader. Will is Dave is Burke's voice.

To this book...I had a hard time with the Hack/Pam thing and was sorry to see him give in. I liked him keeping his wife's memory as enough. The book was a little more graphically violent than some of of Burke's others, but the story was good. It was a little convoluted and I kept getting some of the peripheral characters mixed up...there seemed to be a lot of bad guys and their henchmen.

Anyway, not the best Burke book but an excellent adventure nonetheless. I loved the ending. He was one crazy dude.

Although "Rain Gods" introduces a new protagonist and a new locale into James Lee Burke's repertoire, it has the same beautiful, sad, poetic delivery as Burke's Dave Robicheaux series that preceded it. It also has the same undercurrent of anger, desperation, and violence as those previous novels. It seems Burke always writes about low-lifes: the dark underbelly of society. Sometimes I don't know why I keep listening to Burke's novels, because they always make me feel bad; but I can't seem to stay away from them. I can't think of another author who writes so beautifully and so skillfully. Will Patton provides the perfect voice for Burke's novels, with his soft, understated southern accents. I recommend this novel to almost everybody.

What a great listen!

I really enjoyed this one, and was sorry when it was over. Fascinating word portraits of the SouthWest (I know, I used to live there and his descriptions are vivid!) The characters, with the possible exception of Preacher, are real, engaging and you can't help but develop your own attachments and personal interests in almost all of them. The protagonist Hackberry and his deputy Pam almost come to life in Burke's writing, and they are wonderfully believable characters. While there is the predictable good versus evil climactic battle of sorts, it isn't overdone with pyrotechnics and gore, it just sort of comes off as real life. This is a really good book, and the narration is top notch. You really can tell the characters by their unique voices given by Will Patton, and almost don't need the author saying "he said" "she said". I must check out more of Burke and Patton!

I enjoyed Moon of the Red Ponies very much, and thought the narrator was excellent. But this one has surprised me with how good Burke still is. I thought the story was going to be predictable, but surprises appear in the plot. And Will Patton is the best at reading Burke's novels - someone had complained about his Dave Robicheaux reading not being an authentic Louisiana accent. But I don't care how accurate the accent is -- his narration of the story just knocks me out. All around recommended.

In Rain Gods, Burke takes the same narrative style found in his Dave Robicheaux series and transplants it to Southern Texas. We have a new assortment of, as Dave would say, "moral imbeciles" pursuing and being pursued by the novel's protagonist, Hackberry Holland, an aging lawman. It's "No Country For Old Men", but with Burke's special brand of dialogue and narration as opposed to the lean, stripped down style of McCarthy. Will Patton, as always, does a great job of telling the story but not getting in the way of it. Once again Burke does a great job of exploring the darker side of humanity and the road to redemption. However, Hackberry's sidekick, Pam Tills, is a poor substitute for Clete Purcell.

James Lee Burke exceeded my expectations with this well-written story with equally well-developed and interesting characters. Preacher Collins is every bit as interesting a character as is Hannibal Lecter. Listeners will be questioning whether there is some good in him. As the book goes on listeners will find themselves changing their attitudes about Nick Dolan. And they will love his wife, Esther. Sheriff Hackberry is interesting but, more than anything, he takes the author's perspective in helping the listener understand how the characters relate and interact. You don't get too much better than James Lee Burke's writing in this book. The story in another author's words would not be nearly as compelling. And I was surprised, if not blown away by Will Patton's narration. It was flawless. Another top ten book in my Audible collection of about 150.

The more I read Burke, the more I appreciate his sensibilities. He puts thought into his characters, his plots, and his writing. As a keen observer of the natural world, his settings invariably serve as a stark foil to the human machinations at play. The hobbled dignity and isolation of his protagonists serve the genre well, and the reader always learns from them. Will Patton is outstanding as a narrator. Burke has done it again with a great "read"....