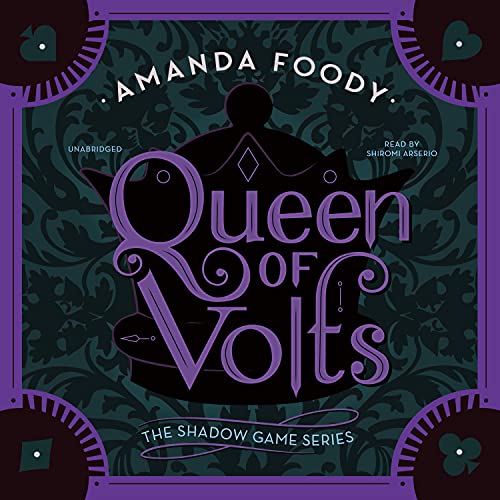 Return to the City of Sin, where the final game is about to begin...and winning will demand the ultimate sacrifice.

Only days after a corrupt election and brutal street war, one last bloodthirsty game has begun. The players? The 22 most powerful, notorious people in New Reynes.

After realizing they have no choice but to play, Enne Scordata and Levi Glaisyer are desperate to forge new alliances and bargain for their safety. But while Levi offers false smiles and an even falser peace to the city’s politicians, Enne must face a world where her true Mizer identity has been revealed...and any misstep could turn deadly.

Meanwhile, a far more dangerous opponent has appeared on the board, one plucked right from the most gruesome legends of New Reynes. As the game takes its final, vicious turn, Levi and Enne must decide once and for all whether to be partners or enemies.

Because in a game for survival, there are only losers....

WHY DID THE NARRATOR CHANGE???!

The first 2 books were good but I struggled to try to listen to this 3rd book because the new narrator just ruined it. So disappointing.

SO HARD listening to this book. The story is good and I couldn’t NOT listen to it, but the narrator was super disappointing. Hard to follow along.

I wasn’t a big fan of the narrator change in this book. I absolutely loved the series but the narrator was very hard to follow along with. I loved the the narrator from the first two books and wished they had stuff with her for the third book as well.

Narrator Change on the LAST book!

I’m not sure if it is the narrator change or the character Lola was just poorly written in this book, but the Lola is beyond irritating! I don’t recall having to fast forward through her parts in the last 2 books! She is so negative and whiny! I LOVED the first two books, but this book was hard to sit through!! Mostly seemed to be Lola’s character. Changing a narrator on the last book of a trilogy is a Poor choice!!!

The narrator would probably be good in another book, but her reading Lola is so irritating it made me hate this book! So disappointed in this book!

The narrator has changed

I was super upset about the third book of this series changing narrators but Shiromi did a good job and finished the story well. The trilogy was good if not a bit heavy, but overall really enjoyed it and appreciated that all loose ends were tied up and answered.

Change in narrator ruined the book.

I love the ace of shades trilogy but they changed the narrator in this last book, and it is horrible. I’m so disappointed

Was highly disappointed by the change in narrator. Nearly didn’t finish listening to the book.

I LOVE this story and was really looking forward to hearing the last book but the narrator is by far the worst I’ve heard and I couldn’t make it through the first hour. I guess I’ll be buying this in paperback so I can find out what happens.

The first two books in this series were wonderful! The storyline and narrator were amazing! I don’t know why but this new narrator for book 3 is terrible….Doesn’t do any of the character voices and has a very sleepy slow monotone voice! So upsetting for the finale of this series! What a mistake!