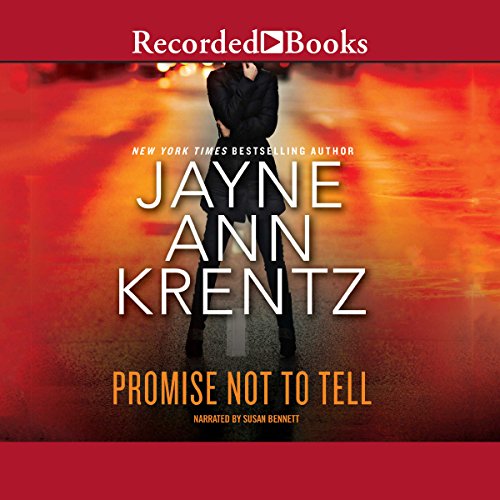 Promise Not to Tell

A broken promise reveals a terrifying legacy in this electrifying novel from the New York Times best-selling author of When All the Girls Have Gone.

Seattle gallery owner Virginia Troy has spent years battling the demons that stem from her childhood time in a cult and the night a fire burned through the compound, killing her mother. And now one of her artists has taken her own life, but not before sending Virginia a last picture: a painting that makes Virginia doubt everything about the so-called suicide - and her own past.

Like Virginia, PI Cabot Sutter was one of the children in the cult who survived that fire - and only he can help her now. As they struggle to unravel the clues in the picture, it becomes clear that someone thinks Virginia knows more than she does and that she must be stopped. Thrown into an inferno of desire and deception, Virginia and Cabot draw ever closer to the mystery of their shared memories - and the shocking fate of the one man who still wields the power to destroy everything they hold dear.

Felt like I was listening to a very long obituary. I've been a huge JAK fan for decades but this story has none of the charming interaction between characters that I so enjoy in her writing.

Not as good as her previous books.

Very slow moving. The audible performance is poor, with the male character's voices barely distinguishable from female's. Very little inflection and emotion in the voices.

I'm surprised at the negative comments. I've stopped reading another favorite author because her characters have become too 1 dimensional and she substitutes long sex scenes. I do believe our texting/twitter society is turning many into a bunch of distracted nitwits. Thankyou for a story with depth! As for the narration I would rather listen to a calmly read book than one filled with annoying false voices. Better yet hire a mail and female reader. Given what we pay for these books one more salary for the production company shouldn't be too onerous...

This book is fast paced, intriguing, and definitely worth my money. I have been a fan of Krentz for a long time, in all her genres. This book does not disappoint. Cabot and Victoria were both rescued from a cult when they were children when the cult leader set a fire that killed their mothers and others. Now as adults, they meet to investigate whether one of the last old survivors of the erstwhile cult was murdered or committed suicide. I definitely didn’t see some of the twists coming. This is the second of a series of connected books, and the last chapter sets up the next one, but not in an annoying way. I am looking forward to the next book, and I know I will reread the whole series again in the future.

Ms Krentz's books are always great but this one was riveting! Narration was a bit slower than needed to be, I caught myself almost growing disinterested but story was so good that I didn't want to miss out even though the narrator had me yawning. I 'sense' a new series coming with excitement not felt since our beloved Arcane Society came to an end (keep hope she will revive once again). Bravo!

Mediocre narration takes away from story

Typical engaging Krentz story, although more damaged protagonists than usual. But slightly off pacing, and frequent indistinguishable difference in characters’ voices by the narrator made the story confusing at times. Also one significant jarring glitch where a line was repeated by the narrator.

I have listened to the book twice. I enjoyed it both times. I failed to understand why there were 75 chapters. They were distracting in the continuity of the plot's progress. Bennett was equal to the task of narrator. I am truly a Krentz fan, just don't know if I can adjust to the quirky format in this book.

Would you listen to Promise Not to Tell again? Why?

The second Book in a series involving a deadly cult 20 years later. The book is well written but needed to edit out some of the sub plots. What happened to cult survivors good. Murderous OCD Start up head, twins separated at birth and evil Biker half sister unnecessary.

If you’ve listened to books by Jayne Ann Krentz before, how does this one compare?

Which character – as performed by Susan Bennett – was your favorite?

Narrator droned a bit. I put the reading speed up to x1.5 which actually helped.
Good story. Liked the characters. Main characters were both a bit damaged, but it did not hurt the flow of the story. A good continuation of a story that began in 'When all the girls have gone'. Different main characters for each book of the trilogy but a mystery that unfolds thru the series.
Recommended.

Pay no attention to the bad reviews!!! This is classic JAK!

This book had it all: romance, adventure, humor, suspense; I loved every minute!! I loved part one and two of this series: Cutler, Sutter, and Salinas!!! The minute I finish this review I’m going to buy part 3! Can’t wait🌟💃🌺🌸🥀🌸🌼🌻🌹💥!!!