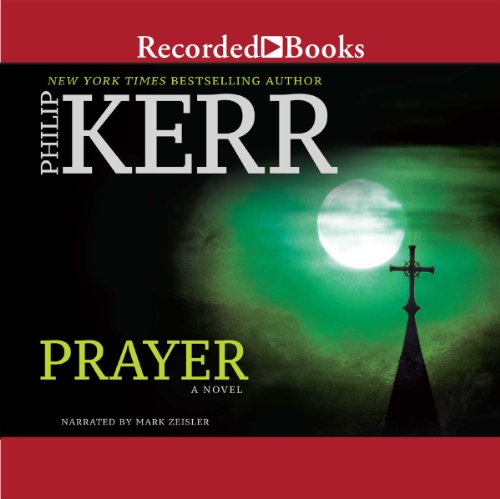 Special Agent Gil Martins investigates domestic terrorism for the Houston FBI. He is a religious man who is close to losing his faith; the very nature of his job has led him to question the existence of a God who could allow the things that Gil sees every day. But Gil' s wife, Ruth, doesn' t see things the same way and his crisis of faith provokes a fracture in their marriage. Gil' s world is breaking apart. At the same time, Gil starts to investigate a series of unexplained deaths that bring this crisis of faith into uncomfortable focus. When Esther, a disturbed woman, informs Gil that these men have been killed by prayer, Gil questions her sanity. But as the evidence mounts up that there might be something in what she says, his new-found atheism is severely challenged, more so as he finds his own life is next on the line.

Prayers to a Wrathful God

As a fan of Phillip Kerr's Bernie Gunther series and his very creative other fiction novels I was impressed with the imagination of Kerr to create a story and a character able to piss off religious people, atheists and agnostics all at the same time.

Who is impersonating Philip Kerr???

What made it a good experience for me was that I stopped listening.

What genre would that be--Texas bashing, faith bashing, or the snide remark genre?

This book had no redeeming qualities. I finally skipped to the end in the hope that there was a surprise--the whole thing was a bad dream, a spoof, anything. I can't believe this book was written by the same Philip Kerr that I have listened to over the last few years. This was a bad career move.

when I first started it I kept trying to think who of my reading pals I would recommend it to, by the time I finished it I decided I wouldn't embarrass myself recommending this book

the narrator did a good job with a poorly written story

I felt the author had a good outline for his book but by the end of the book it was too hurried and events of the end of the book didn't entertwine with each other well enough to make it good. I thought he was going to lean towards writing like lehane but instead it was sophomoric and could have been much better. very disappointing

I have enjoyed other books by Philip Kerr that feature his Berlin detective. This book is not so much a mystery book as screed for an Old Testament Deity. I did not enjoy it and had trouble finishing it.

Wow, WTF Happened To This Guy?

Not flogging Catholicism or any other religions.

What was most disappointing about Philip Kerr’s story?

This is pretty frickin far from Bernie Gunter.

Not doing it at all.

If this is Philip Kerr's new style, I'm out. For good.

best read ive had in years. unusual themes covered which I was not expecting. nice twists and turns with some com.uppance at the end..

Phillip Kerr did not write this book

I simply do not believe the Phillip Kerr who wrote all those terrific Bernie gunter novels is the person who wrote this book. There is no comparison in the quality of the writing, so somebody's pulling a fast one here. I was glad to see so many other people caught on to this as well. If they're going to cheat readers by putting an author's name on a book just to sell books, they're going to lose credibility and readers real soon. What gets me is I don't think the person who wrote this even listened to or read a single book actually written by Phillip Kerr, it's just that bad. Joe Registrato

For the first 70% of the book this was an interesting, almost unique, plot concerning an FBI agent who has come across a number of apparently random deaths of atheist writers and intellectuals. Each death could be explained individually, but collectively, they looked suspicious.

All the ticks were in place, with the FBI agent being a brilliant lone maverick, marriage falling apart and colleagues who are not bought into the issue. Then he finds supporting evidence to his suspicions and the author loses the plot.

Not at all, the ending to the book was poorly executed. Many of the possible outcomes would have been handled so much better by Stephen King. This could have been a great story, it turned out to be poor plotting as the hero behaved like a complete ass.

Which character – as performed by Mark Zeisler – was your favorite?

No complaints about the reading which was good. As the main character (it is written in the first person) had been brought up in Scotland till the age of 14, his total American accent was not in character, but that had no affect on the telling of the story.

What character would you cut from Prayer?

The author. I am not sure what crusade he was on, but he missed the mark badly.

Do not be put off Philip Kerr, this is the first of his books that I have not appreciated. Mybe religious novels are not for me.

What disappointed you about Prayer?

Incongruent. Made no sense. Very disappointing as I have thoroughly enjoyed his other work. Could have been written by someone else. Right from the get go his relationship with his wife is odd, loved her to pieces but betrays her easily etc. Did not finish the book. Annoyed me each time I tried to listen again. Hard nosed FBI agents carrying on like schoolgirls.

Would you be willing to try another one of Mark Zeisler’s performances?

Extremely disappointing and not worth the time.

What disappointed you about Prayer?

Kerr was trying to do something different and he succeeded, it was different. Unfortunately it was different "bad"! Some chapters were average commercial plonk and the other sections were just bad. It was like a B horror movie that just kept going enough to stop you from walking out.

Would you ever listen to anything by Philip Kerr again?

Have also bought the "Shot" at the same time so I will give it a try, hope it is better. I loved the Gunther series.

The reading performance was good and that was one of the reasons I finished the book.