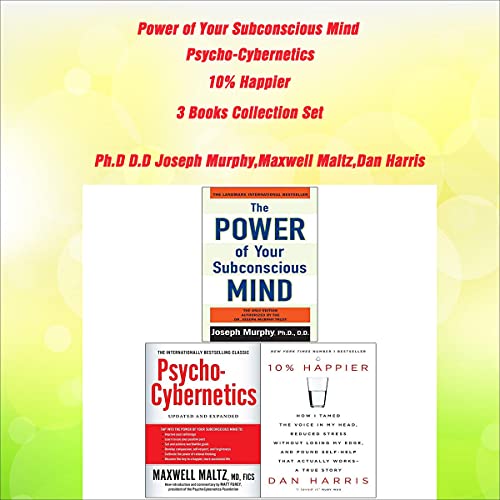 Psycho-Cybernetics: The classic work of the human potential movement has been updated and expanded to introduce a new generation of listeners to the original science of self-improvement. Cybernetics (loosely translated from the Greek): a helmsman who steers his ship to port. Psycho-cybernetics is a term coined by Dr. Maxwell Maltz, which means steering your mind to a productive, useful goal so you can reach the greatest port in the world: peace of mind.

10% Happier: How I Tamed the Voice in My Head, Reduced Stress Without Losing My Edge, and Found Self-Help That Actually Works: After having a nationally televised panic attack, Harris knew he had to make some changes. A lifelong non-believer, he found himself on a bizarre adventure and realised that the sources of his problems was the very thing he always thought was his greatest asset: the incessant, insatiable voice in his head, which had propelled him through the ranks of a hyper-competitive business, but had also led him to make the profoundly stupid decisions that provoked his on-air freak-out.

Something is wrong with the first book

I haven’t even gotten through the first book, but it continues to repeat the same stories over and over again. Even though it says the chapters are advancing, I’ve heard some of these examples/stories 4-5 times now at least. Waste of my book credit -.-