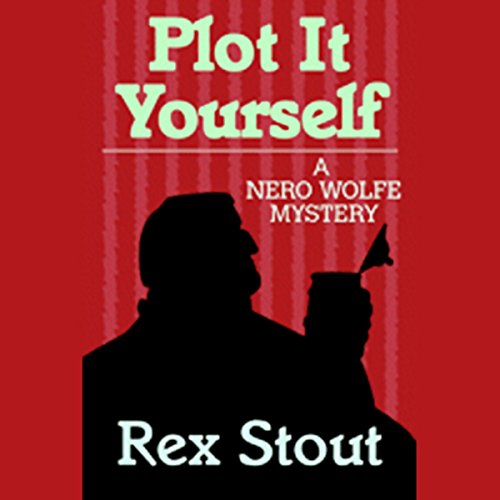 When a group of publishers and writers hires Wolfe to solve a case of false plagiarism, it's time for the great detective to hit the books. Four unrelated accusers - including a down-and-out hack writer and a lady poet with a penchant for nude sunbathing - have been fleecing best-selling authors, claiming the authors have stolen their work and ingeniously planting evidence to back up their claims. But when punctuation gives way to puncture, Wolfe knows this is no simple case of extortion. This time he'll need all the critical skills at his disposal to close the book on a killer well versed on the ABCs of murder.

“It is always a treat to read a Nero Wolfe mystery. The man has entered our folklore.” (The New York Times Book Review)

A grand master of the form, Rex Stout is one of America’s greatest mystery writers, and his literary creation Nero Wolfe is one of the greatest fictional detectives of all time. Together, Stout and Wolfe have entertained - and puzzled - millions of mystery fans around the world. Now, with his perambulatory man-about-town, Archie Goodwin, the arrogant, gourmandizing, sedentary sleuth is back in the original 73 cases of crime and detection written by the inimitable master himself, Rex Stout.

"What's not to like about a Nero Wolfe mystery? The mysteries are short, cleverly plotted, well paced, and, if you're an audiobook listener, wonderfully read by Michael Prichard. In this breezy title, Nero Wolfe, aided by his faithful employee, Archie, exposes an extortion plot involving plagiarism and catches a cold-blooded killer. Michael Pritchard has read nearly 20 books in Stout's series and has mastered Wolfe's deep, meditative voice and Archie's spry, chipper voice, as well as those of a host of other characters we recognize from one recording to the next." ( AudioFile)

Still one of the elite private detectives

Readers familiar with Rex Stout's tales of Nero Wolfe and his Associate Archie Goodwin will be gratified to see that the Old Master retained his mastery of the detective story form to the end of his long writing career.
Civilized, articulate, short on explicit violence and long on solid craftsmanship, this late book in the series will give pleasure to long-time readers.
For those, perhaps attracted by the excellent TV series of some years back, this offering should be no disappointment. The narrator, I imagine, has had a longer engagement with these characters than anyone but the late author. His reading reinforces the different characteristics of the two leading characters and offers none of the failed efforts of some to reproduce male and female voices with verisimilitude. He allows the text and subtle variations in intonation to work their magic in the listeners mind.
The plot retains its interest throughout the book without resorting to the complex variations,misplaced psychologizing and ready sex play which bog down the straight ahead story line preferred by the "classic" detective story writers of his era.

Plot It Yourself is a good listen.

I love Michael Pritchard as the narrator of the Nero Wolfe books. This is a good story with interesting characters well drawn and I think Rex Stout got in a few digs about the publishing industry of his time. Well done.

What did you love best about Plot It Yourself?

I love the way Stout manages to trick me every time with his false and real clues. Very Satisfactory

What was one of the most memorable moments of Plot It Yourself?

Have you listened to any of Michael Prichard’s other performances before? How does this one compare?

Wish Rex Stout were immortal that way there would always be a new Nero Wolfe novel.

You can't go wrong with Michael Pritchard narrating the Wolfe tales. I recommend listening to this in one sitting, or several close together, as there are a lot of characters to keep track of, and you don't want to think "Now, who is this person again?" The plot is nothing special, although Wolfe does forgo both beer and meat until he solves the puzzle, which makes for some fun scenes.

All Nero Wolfe books are great and this is no exception. Rex Stout allows Archie to be a superb teller of the tales.

Nero Wolfe ' s pride is challenged by a murderer.

Nero Wolfe is one step behind a murderer and it challenges his pride so severely that he vows to quit his detective business entirely if he fails to catch the villian. The ending is inspired!

Where does Plot It Yourself rank among all the audiobooks you’ve listened to so far?

Always Archie. He has several facets to him.

The ones in Wolfe's office

This was an earlier version of Nero Wolfe than I had read before (thought I'd read them all, but I hadn't read this one). I enjoyed the book and would recommend it to Nero Wolfe fans - not the best Wolfe but very enjoyable.

This is a really good Nero Wolfe novel. I like the cast of characters and the story setup. I found the culmination slightly weaker than the very best of Nero Wolfe, but it was still very well worth the listen. The narration, as usual, was excellent. The story has the expected twists and surprises. Very satisfying..

As usual, an excellent Rex Stout Nero Wolfe mystery. I gave the story only four stars this time because I found the final interview between Wolfe and the murderer a little weak.