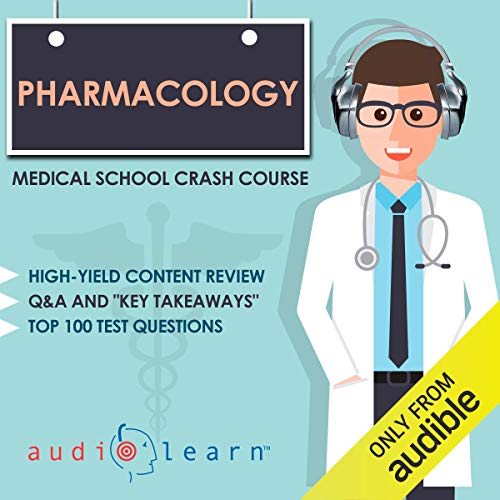 Written by experts and authorities in the field and professionally narrated for easy listening, this crash course is a valuable tool both during school and when preparing for the USMLE, or if you're simply interested in the subject.

The audio is focused and high-yield, covering the most important topics you might expect to learn in a typical Medical school Pharmacology course. Included are both capsule and detailed explanations of critical issues and topics you must know to master the course.

The material is accurate, up to date and broken down into bite-sized sections. There is a Q&A and a key takeaway section following each topic to review questions commonly tested and drive home key points.

Unreliable and dull reading of a textbook.

What would have made Pharmacology better?

This is one of a series of recent Medical School audio-books from AudioLearn and I assure you these are not high yield questions. Instead, it's a reading of random facts from a pharmacology text. An audio-book should in some way augment the instruction in the medical school classroom and this does not do that. It would have been better if there was some kind of connecting structure rather this is a group of dozens of disparate chapters that might make sense to someone who already has command of pharmacology, but not someone trying to learn it. It would have helped to have rationals for the questions. Hearing the answer is false and then silence seemed weird and empty.

Has Pharmacology turned you off from other books in this genre?

Just made me wary of certain audiobooks that don't make an audiobook, rather, they make an audio reading of a print book without recognizing that without the visual help of images and words, descriptions need to be concrete and fuller. This book required someone to have a very high level command of pathophysiology and biochemistry to understand what the narrator was saying, but if someone had that command of those subjects, they probably wouldn't need this book.

What didn’t you like about Bhama Roget and Dr. John P. Sullivan ’s performance?

It felt like the I was being talked at rather than talked to. The voice was pleasant, but there was no increase or decrease in inflection, each point was as important as the last, a deadly interaction got as much emphasis as a simple fact. There are some narrators that are pleasant to listening to reading a dictionary, this is not the case here.

If you could play editor, what scene or scenes would you have cut from Pharmacology?

It's not about cutting scenes, it's about creating a narrative that a student can follow, this book could have easily been six hours and much better. The author would benefit from Zinsser's On Writing Well to remove unnecessary words, passive voice, and all the things that took the life out of the book. Instead, it's a plodding volume.

There is unreliability in the content, confusing orthostatic hypo and hypertension, strange pronunciations of some terms (monoamine oxidase inhibitors) drug names that aren't really high yield or common.

There are some bad reviews for this book. I find it a good start for anyone interested in the field or anyone who thinks they are interested.
One bad review is talking about the wording. You would think that person was reading The Great Gatsby. If you are looking for an exciting book full of rich descriptions then you should read Harry Potter. If you want to learn about science and not literature, this book might be for you!

For people not too familiar with the subject of Pharmacology, this provides a good base to start from. Who knows, maybe you'll fall in love the field which is very interesting indeed!

I hate to leave a negative review but the truth may lead to a better product in the future.

Ive been a pharmacist for 10 years and I just wanted a review. I was able to last about 5 hours until I could not handle the mispronunciations any more. I feel bad for the students who will be hearing these drug names for the first time. I hope they don't get blank stares during rounds.

As with the rest of the series the primary audience is med students. Thus the presentation concisely covers commonly used drugs used to treat various medical conditions, the mechanism of action and contraindications.

For those who are not medical students: the authors assume you already have background knowledge in chemistry and anatomy. The information is for individuals who will be prescribing these medications regularly. Essentially this translates to the book containing all the information that comes on those little papers packaged with your medication that you usually throw away.

This audiobook does not provide headings for chapter selection and is presented in a robot voice. Hard to listen to while doing other things bc of the monotone robot voice.

A must have for pharmacy students

I listen to this repeatedly. It helps me memorize key concepts and drug properties. I love the second half of the book where each drug is explained.

if I were to write a book based on "what everyone has already been told" and then distill it down to be so basic as to be functionally useless, this would be it.

It's clear and concise. You can listen without noticing you're retaining the information. It helped me a lot.

To much is given , much is expected

The products created by AudioLearn are top notched. However, it is impossible for lectures in a traditional college setting just to lecture their with out providing their students with the necessary PowerPoints for the students to have or Textbooks for their students to purchase. So, Audio lectures alone without physical content to engage with is not adequate enough to allow students to succeed.

As a student in graduate school, I appeal to the leadership of Audio Learn to make accessible the contents needed for every student to fully learn and to become successful.

Thank you for considering.