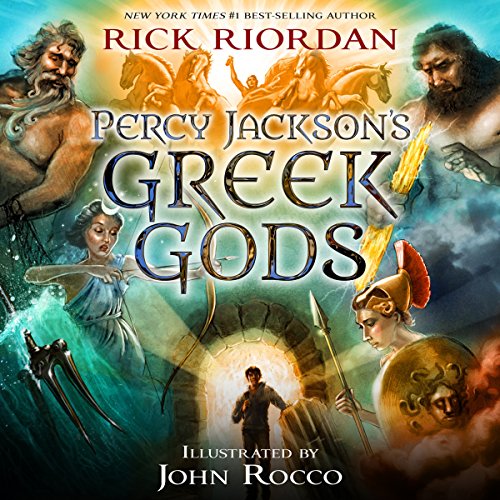 "A publisher in New York asked me to write down what I know about the Greek gods, and I was like, 'Can we do this anonymously?' Because I don't need the Olympians mad at me again. But if it helps you to know your Greek gods, and survive an encounter with them if they ever show up in your face, then I guess writing all this down will be my good deed for the week."

So begins Percy Jackson's Greek Gods, in which the son of Poseidon adds his own magic - and sarcastic asides - to the classics. He explains how the world was created, then gives listeners his personal take on a who's who of ancients, from Apollo to Zeus. Percy does not hold back: "If you like horror shows, blood baths, lying, stealing, backstabbing, and cannibalism, then read on, because it definitely was a Golden Age for all that."

It is so Great to have Jesse Bernstein back!

Where does Percy Jackson's Greek Gods rank among all the audiobooks you’ve listened to so far?

For me this book is the perfecting stopping place while waiting for the next Book of Hero's to come out next month. I've begun to develop my own thoughts and Ideas on how these different characters could play in to the next book. It kinda makes me feel I have a jump of the other readers waiting for Percy, Annabeth, Jason, Piper, Hazel, Frank and of course, my new favorite, Leo.

I understand a lot about Roman and Greek mythology, but to hear Percy take on these God and Monsters is hilarious.

The way that he moves through the different characters with such ease. The are many new characters voices to portray in this book and Jesse handles each one with new zest and never duplicates the voice, voice inflection or mannerisms used with other characters.

I don't think the time is right to put this book to film yet.

I hope that Mr. Riordan's Son continues to work with these characters and story. The possibilities are endless!! I mean c'mon at some point Camp Half Blood may need the help of Carter Kane, Sadie Kane, Bast and Khufu.Wow! Wouldn't that make for a good read. ;)

A fun retelling of the major Greek Gods. The story being told by Percy Jackson add the humor and wit we’ve all come to expect from Rick Riordan.

This has been an interesting story. It's very well done and easy to listen to more than once. The audio book is great alone and as a reading companion.

Almost Didn't Buy This Book - Glad I Did

After listening to the action and adventure tales, I didn't think I'd enjoy this book. Boy, was I wrong! The tales of each of the Gods is funny and pulls you into their story. It's almost like mini Percy Jackson stories in each chapter. It took me several months to decide to buy the book, and I'm very glad I did. Narrator is superb.

Percy Jackson books got this far? This is one of the best! I love this book so much! Recommend it!

This was a lot of fun!

I really enjoyed this book. I truly did. I laughed A LOT and really truly enjoyed the humor behind the lesson. I had a blast learning about the Greek Gods and all of their, capades! ha That Zeus...wowsers he was the original Manwhore big time!!!!

Would you listen to Percy Jackson's Greek Gods again? Why?

Yes, it was funny and educational. My son and I were just saying that we needed to review the mythology stories when this came out. And how better than via Percy Jackson and Jesse Bernstein.

Just as humorous as the original Percy Jackson series. It covered both the mythological characters we all know, and some I'd never heard of.

What does Jesse Bernstein bring to the story that you wouldn’t experience if you just read the book?

He is the best narrator for the Riordan books and one of best children's narrators we have run across. He's funny without being distracting. And he does wonderful, distinctive voices for the different characters.

The Riordan books are a blast for kids and very educational. This one is no exception. This middle aged mom loved it too.

Excellent for kids and parents wanting to keep up

Who would you have cast as narrator instead of Jesse Bernstein?

No one, he sounds a bit like Matthew Broderick :-)

My kids have loved the Riordan books; I've enjoyed them as well but was never a big Greek mythology buff. This is an absolutely fun way to get the basics; of course a bit embellished. Riordan must absolutely love mythology to be able to create these stories (taking the original and making it even more fun). We all enjoying it in the car (my daughter (age 10) has read the book cover to cover and loves that as well).