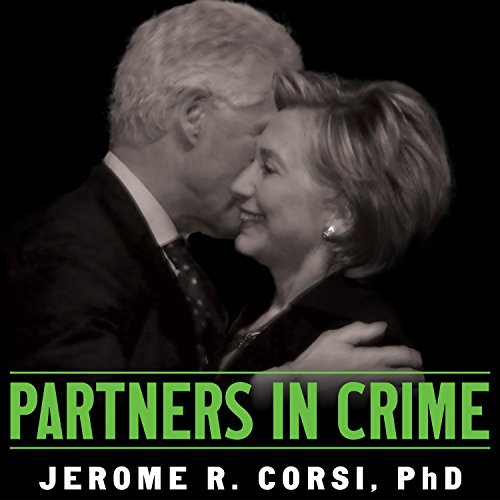 Corsi exposes how the Clintons amassed hundreds of millions of dollars in personal net worth while building a $2 billion empire in the Clinton Foundation. The victims are thousands of honest people who contributed their hard-earned money to what they thought were philanthropic causes. The sordid tale involves suspicion of Enron-like fraudulent accounting practices by none other than PricewaterhouseCoopers, a "Big Four" firm, as well as the several shell corporations and pass-through bank accounts Bill Clinton has established in secret to hide what amounts to kickbacks from Clinton Foundation donors and sponsors.

Should be required reading for every #Voter in #America

Excellent review of the " ultimate insiders" Bill & Hillary. The depth and research of "Partners in Crime" by Jerome Corsi is extensive.
He reveals the true nature of the Clintons. Left to themselves, and with the power of another term in the White House they will surely destroy our hopes for truth & justice. Along with giving up our nation's sovereignty.
It is up to Voters to inform themselves and in so doing protect what God has given to us the "Rule of Law".

Every registered Democrat should read this book.

Join this program every Democrat should read this book and then contact their local state's Attorney General. It is shameful what the Clinton foundation has done and it is more shameful what the people of the United States choose to ignore.