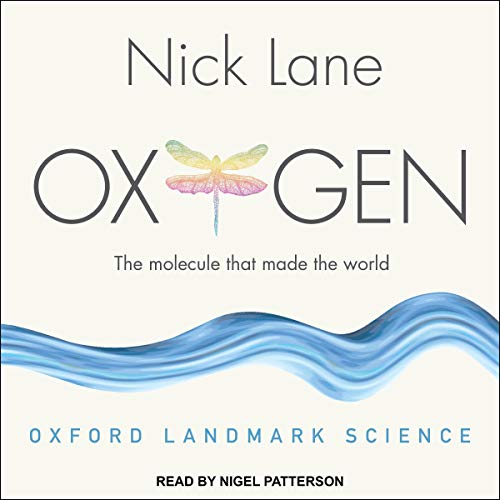 Three hundred million years ago, in Carboniferous times, dragonflies grew as big as seagulls, with wingspans of nearly a meter. Researchers claim they could have flown only if the air had contained more oxygen than today - probably as much as 35 percent. Giant spiders, tree ferns, marine rock formations, and fossil charcoals all tell the same story. High oxygen levels may also explain the global firestorm that contributed to the demise of the dinosaurs after the asteroid impact.

The strange and profound effects that oxygen has had on the evolution of life pose a riddle that this audiobook sets out to answer. Oxygen is a toxic gas. Divers breathing pure oxygen at depth suffer from convulsions and lung injury. Fruit flies raised at twice the normal atmospheric levels of oxygen live half as long as their siblings. Reactive forms of oxygen, known as free radicals, are thought to cause aging in people. Yet if atmospheric oxygen reached 35 percent in the Carboniferous, why did it promote exuberant growth instead of rapid aging and death?

Oxygen takes the listener on an enthralling journey, as gripping as a thriller, as it unravels the unexpected ways in which oxygen spurred the evolution of life and death.

A Story About Pretty Much Everything

Super interesting book that covers the formation of the earth, the beginning of life on our planet, evolution, genetics, health, lifestyle, diet, etc. Lot's of new information to me like:

2. The Great Oxidation Even or Catastrophe might not have been a catastrophe at all. Meaning, a surplus of oxygen in the atmosphere after the invention of photosynthesis might not have caused a mass extinction as has been widely speculated.

3. Photosynthesis evolved only once.

4. Were it not for the invention of photosynthesis, which created a surplus of oxygen in the atmosphere, which in turn helped to create an ozone layer, Earth would have lost it's liquid oceans to evaporation as happened to the liquid oceans on Mars and Venus. This also points to the fact that if life ever existed on Mars and Venus, it certainly never evolved the ability to photosynthesis.

5. Mitochondria, by taking up residence, or more likely, seeking refuge inside a the cell membrane, might have found a way to perpetuate the conditions of a low-oxygen environment from which it originally evolved as a bacteria billions of years ago! Whoa!

Finally, I listed to the audio book which was read by Nigel Patterson. Patterson might be my favorite narrator. I could listen to him read just about anything.

Such an outstanding review of a complex subject without dumbing it down. I think I shall listen to it multiple times.

The science of where oxygen came from & adaption.


very comprehensive, full of science that had passed me bye since graduating College. A lot to still learn, it will be a better read during the next read.

The Very Best of The Best

This was the third and my favorite of books written by Nick Lane, my new favorite biochemist/author . This book with the “simple” title of Oxygen weaves together General chemistry, biochemistry, geochemistry, organic chemistry, plate tectonics , nutrition, life origin research...... the list is endless . Yet these seemingly minimally related topics are deftly woven together to cover most things I imagined might be covered in a book named after the element, and many more I never considered . A thoroughly enjoyable was to spend an entire day.
I’m sure to go back through it time and again!

Nick Lane is one of my favourite authors. His story telling and writing style makes complex scientific concepts come to life, and easy to understand.

I'm well-adapted to the UK use of the mother tongue, but the narrator-Nigel-Patterson- spoke in an imperious, suck-in- the last syllable amateurish tone that made the entire book a very tedious listen all the way through. Nick Lane is a fabulous writer, though the material presented is out of date. I do not recommend this book.The narration ruined it;