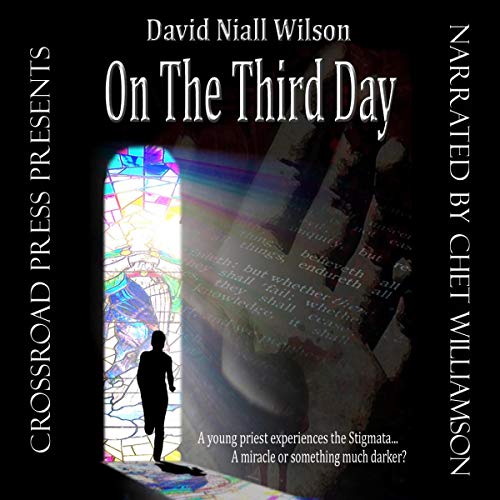 On the Third Day

Father Darren Prescott is a seeker of truth. He works for the Vatican, but his real work is within his own mind and heart; Father Prescott hunts miracles. Father Thomas is a young priest with a quiet congregation that worships at San Marcos by the Sea, a small cathedral outside San Valencez, California. One Easter, Father Thomas’ Mass is interrupted by something he cannot explain - something powerful that shakes his world, and that of his congregation.

On the Third Day is the story of Father Thomas and his search for answers. He turns to the church, and his immediate superior, Bishop Michaels, for support and assistance and is shocked to find that not all priests seek miracles. Some are comfortable with the status quo and vicious in their defense of it. Bishop Michaels is battling his own demons, not the least of which is a barely controlled love of alcohol.

Despite the distaste it engenders, Bishop Michaels attends Easter Mass the year after the first "incident". He comes armed with an attitude of furious disbelief, and a video camera. When Father Thomas not only repeats the previous year’s experience, but with much greater intensity, collapsing across the altar and causing a near riot, the Bishop escapes with his camera, and his sanity, and makes calls of his own. He still does not believe, but now he feels he needs a greater power than his own to prove his disbelief, even to himself.

At the request of Bishop Michaels’ superior, and his own mentor, Cardinal O’Brien, Father Prescott arrives and begins his investigation with a third Easter Mass looming. The Bishop is determined that Father Thomas be proven a charlatan and a fraud. Father Thomas is frightened for his life, and for his faith, and only wants answers. Father Prescott? He wants the miracle he’s waited his entire life to overcome, to make up for what he considers past failings of his own.

What all three men find is the powerful, thrilling conclusion to On the Third Day, an experience that draws them together and pushes them apart in ways they never could have imagined. The answers are there, but some answers are too difficult to bear.

On the third Day

This book
was given to me for free at my request and I provided this voluntary review.