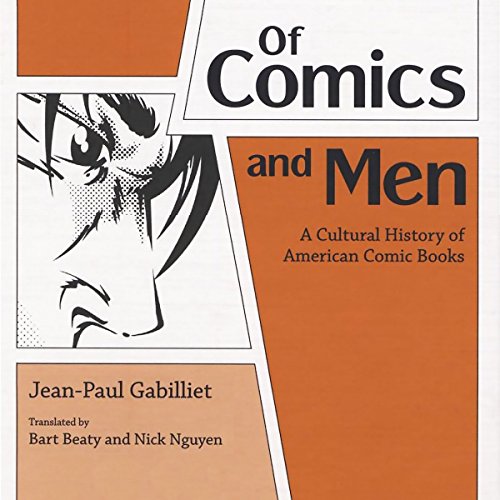 Of Comics and Men

Originally published in France and long sought in English translation, Jean-Paul Gabilliet's Of Comics and Men: A Cultural History of American Comic Books documents the rise and development of the American comic book industry from the 1930s to the present. The book intertwines aesthetic issues and critical biographies with the concerns of production, distribution, and audience reception, making it one of the few interdisciplinary studies of the art form. A thorough introduction by translators and comics scholars Bart Beaty and Nick Nguyen brings the book up to date with explorations of the latest innovations, particularly the graphic novel.

The book is organized into three sections: a concise history of the evolution of the comic book form in America; an overview of the distribution and consumption of American comic books, detailing specific controversies such as the creation of the Comics Code in the mid-1950s; and the problematic legitimization of the form that has occurred recently within the academy and in popular discourse.

Viewing comic books from a variety of theoretical lenses, Gabilliet shows how seemingly disparate issues - creation, production, and reception - are in fact connected in ways that are not necessarily true of other art forms. Analyzing examples from a variety of genres, this book provides a thorough landmark overview of American comic books that sheds new light on this versatile art form.

The book is published by 2015 University Press of Mississippi.

Gabilliet does his best to cover all forms of comics from newspaper strips to graphic novels. In addition to discuss the history and evolution of the form, Gabilliet dives head first into the business side of things. He discusses in details such issues as print runs, demographics, distribution networks, and the working conditions for comic book creators and artists.
Overall, if you are a late comer to comics like me this is a great way to jump start your journey. If you're a long-term fan you might be able to better enjoy the richest of Gabilliet's arguments and the hard look he takes at the business of comics might give you a different perspective. There are some downsides to this book however. For one, it was published in 2005 and therefore does not discuss the recent superhero craze and its impacts. Secondly, as a French scholar Gabilliet has a tendency to be a bit snobbish when it comes to certain aspects of fan culture such as cosplay.

good book, odd reader. other than that, very good

the reader was a bit strange, but it's a great history book. I recommend it.