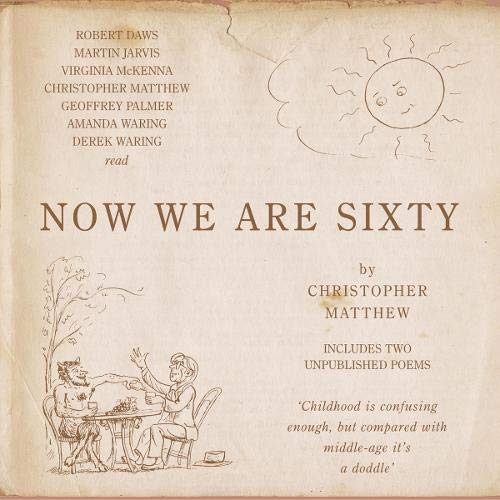 Now We Are Sixty

Christopher Matthew's tribute to A. A. Milne's classic poems - such as 'Buckingham Palace', 'Lines and Squares', 'Puppy and I' and 'Rice Pudding' - is the perfect listen for those just turning 60. Publishing for the first time in audio download to coincide with the 20th anniversary.

When Christopher was six, the poems of Milne were always on hand to reassure him that other children were just as puzzled and naughty and silly as he was, and that grown-ups could be even sillier.

When he turned 60, he decided it was high time there was an equally reassuring volume for those of his generation who were not only more confused than ever but were losing their teeth, their hair and, all too often, their car keys.

What he did 20 years ago was to take some of Milne's best loved poems from Now We Are Six for an older audience, with results that are often hilarious, sometimes rueful and always thought-provoking. Some verses are about realising one is not as young as one once thought, and not feeling quite as chipper as one once did, while others address some of the more disconcerting problems of modern life such as mobile telephones on trains, unsocial behaviour, traffic jams and the internet.