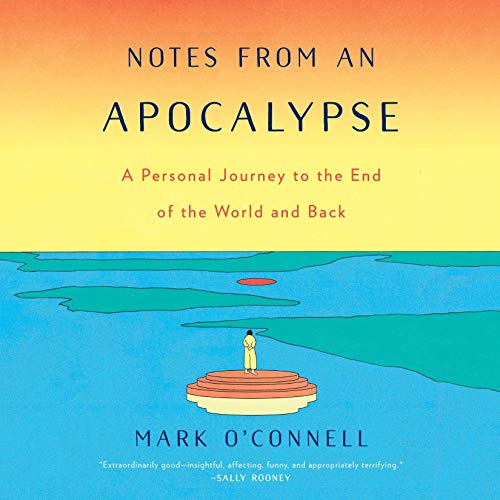 Notes from an Apocalypse

By the author of the award-winning To Be a Machine, an absorbing, deeply felt audiobook about our anxious present tense - and coming to grips with the future

We're alive in a time of worst-case scenarios: The weather has gone uncanny. A viral pandemic has the power to draw our global community to a halt. Old postwar alliances are crumbling. Everywhere you look there's an omen, a joke whose punchline is the end of the world. How is a person supposed to live in the shadow of such a grim future? What does it mean to have children - nothing if not an act of hope? What might it be like to live through the worst? And what on Earth is anybody doing about it?

Dublin-based writer Mark O'Connell is consumed by these questions - and, as the father of two young children himself, he finds them increasingly urgent. In Notes from an Apocalypse, he crosses the globe in pursuit of answers. He tours survival bunkers in South Dakota. He ventures to New Zealand, a favored retreat of billionaires banking on civilization's collapse. He engages with would-be Mars colonists, preppers, right-wing conspiracists. And he bears witness to those places, like Chernobyl, that the future has already visited - real-life portraits of the end of the world as we know it. In doing so, he comes to a resolution, while offering listeners a unique window into our contemporary imagination.

Both investigative and deeply personal, Notes from an Apocalypse is an affecting, humorous, and surprisingly hopeful meditation on our present moment. With insight, humanity, and wit, O'Connell leaves you to wonder: What if the end of the world isn't the end of the world?

"Extraordinarily good - insightful, affecting, funny, and appropriately terrifying. The perfect handbook for the end times. Mark O’Connell is a truly brilliant writer and Notes from an Apocalypse could hardly be more incisive, or more timely." (Sally Rooney, author of Normal People and Conversations with Friends)

"Anyone with open eyes lives today bound by apocalyptic fears for the future and the maddening same-ness that defines the present day. Notes from an Apocalypse is a penetrating investigation into that new uncanny, which shapes both our collective indifference and our climate rage." (David Wallace-Wells, author of The Uninhabitable Earth)

"Notes from an Apocalypse is such a fantastic book. It's harrowing, tender-hearted and funny as hell. O'Connell proves himself to be a genius guide through all the circles of imagined and anticipated doom. Read it, then immediately buy a copy for your ‘but what's the worst that could happen?’ friend." (Jenny Offill, author of Weather and Dept. of Speculation)

The author does not have a good grasp of the time frame for Abrupt Climate Change: we have 10-15 years left on this planet! Read the Science.

This is such a great book. I loved the irony behind some of the first end-of-the-world experiences at the beginning and the honesty of the writer. Really enjoyed the last chapter more on a personal level. A book of rare perfection!

The author looks at several groups preparing for the apocalypse and gives his own thoughts on events. Beautifully written and a thought-provoking read. Highly recommended.