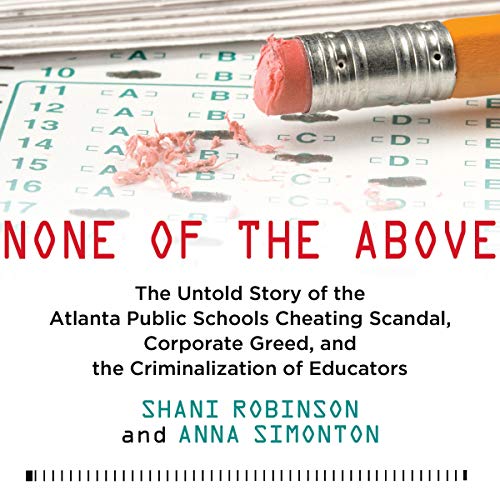 None of the Above

An insider’s account of the infamous Atlanta Public Schools cheating scandal that scapegoated black employees for problems caused by an education reform movement that is increasingly a proxy for corporate greed.

In March of 2013, 35 black educators in Atlanta Public Schools were charged with racketeering and conspiracy - the same charges used to bring down the American mafia - for allegedly changing students’ answers on standardized tests. The youngest of the accused, Shani Robinson had taught for only three years and was a new mother when she was wrongfully convicted and faced up to 20 years in prison.

In None of the Above, Robinson and journalist Anna Simonton explore how racist policies and practices cheated generations of black children out of opportunities long before some teachers tampered with tests. Examining the corporate education-reform movement, hyper-policing in black communities, cycles of displacement and gentrification, and widening racial and economic disparities in Atlanta, they reveal how the financially powerful have profited from privatization and the dismantling of public education. Against this backdrop, they cast the story of the cheating scandal in a new light, illuminating a deeply flawed investigation and a circus-like trial spun into a media sensation that defied justice.

“A former teacher convicted in the Atlanta Public Schools cheating scandal makes a strong case that students have been cheated by corporate profiteers and racist policies that undermine public education.... Robinson claims she didn’t do it, and her book leaves no reason to doubt her.” (Kirkus Reviews)

“This collaboration of former Atlanta public school teacher Robinson and journalist Simonton is powerful, offering a bird’s-eye view into the now notorious 2013 cheating scandal.... What grips the reader most is Robinson’s personal story, especially her other black teachers’ trial under the RICO act, ordinarily reserved for racketeers. A vivid and dramatic look at the consequences of the corporatization of public education.” (Booklist)

“Provides an in-depth look at how the cheating scandal unfolded, resulting in a modern-day witch hunt.... Robinson’s own experience is engaging. For readers interested in educational reform, urban development, or the impact of race and racism.” (Library Journal)

Ce que les auditeurs disent de None of the Above

This was an interesting overview the scandal and the historical circumstances surrounding it. As a biopic it is one sided but entirely believable and well researched.

Shani Robinson’s story is wonderfully told with a backdrop of historical events which illuminate the injustice. Unfortunately the “historical events” are all too current and require the watchful eye of conscientious citizens as well has those with the power to enact change.

So much more than I expected

I never knew how much I could learn from one book. This was impeccably researched and phenomenally written. I couldn't stop listening. I recommend that everyone who cares about our society read this book. I'm buying a paper copy now.

This is an engrossing story, very well told, that contains an intelligent analysis of the social and economic factors involved in the persecution of teachers.