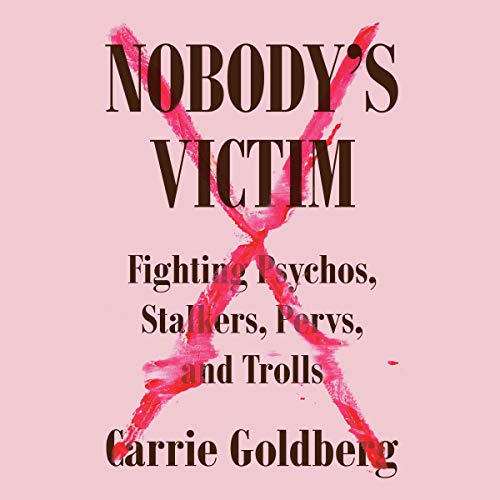 Nobody's Victim is an unflinching look at a hidden world most people don’t know exists - one of stalking, blackmail, and sexual violence, online and off - and the incredible story of how one lawyer, determined to fight back, turned her own hell into a revolution.

“We are all a moment away from having our life overtaken by somebody hell-bent on our destruction.” That grim reality - gleaned from personal experience and 20 years of trauma work - is a fundamental principle of Carrie Goldberg’s cutting-edge victims’ rights law firm.

In gripping detail, Carrie shares the diabolical ways her clients are attacked and how she, through her unique combination of advocacy, badass relentlessness, risk-taking, and client-empowerment, pursues justice for them all. There are stories about a woman whose ex-boyfriend made fake bomb threats in her name and caused a national panic; a 15-year-old girl who was sexually assaulted on school grounds and then suspended when she reported the attack; and a man whose ex-boyfriend used a dating app to send more than 1,200 men to ex's home and work for sex. With breathtaking honesty, Carrie also shares her own shattering story about why she began her work and the uphill battle of building a business.

While her clients are a diverse group - from every gender, sexual orientation, age, class, race, religion, occupation, and background - the offenders are not. They are highly predictable. In this book, Carrie offers a taxonomy of the four types of offenders she encounters most often at her firm: assholes, psychos, pervs, and trolls. “If we recognize the patterns of these perpetrators,” she explains, “we know how to fight back”.

Deeply personal yet achingly universal, Nobody's Victim is a bold and much-needed analysis of victim protection in the era of the Internet. This book is an urgent warning of a coming crisis, a predictor of imminent danger, and a weapon to take back control and protect ourselves - both online and off.

“Feminists who grew up alongside the internet - who don’t see a distinction between real life and what happens online - will find Nobody’s Victim instructive; those who identify as survivors will find it essential.” (Elle)

“Goldberg writes with searing fury, but she is also smart, engaging and sometimes funny.... The book’s no-bullshit, take-no-prisoners attitude is a call to arms, with an overarching goal to transform clients from survivors into warriors.” (Ms. Magazine)

“A significant book that will hopefully spark change.” (Kirkus Reviews)