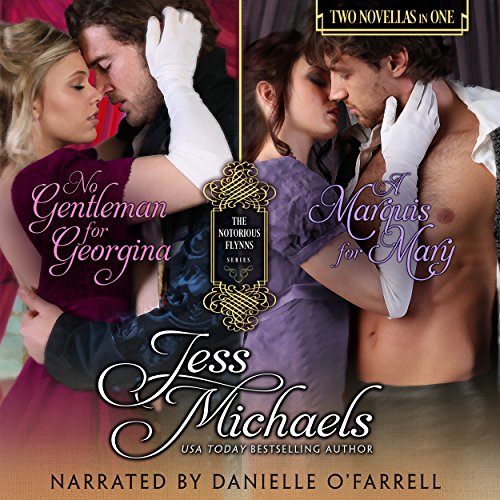 No Gentleman for Georgina/A Marquis for Mary

No Gentleman for Georgina

Georgina Hickson has lived her life doing everything she is supposed to do in order to land the titled husband her family requires. When she met Paul Abbot at a gathering at a friend's, it was the first time she ever wanted more. But more is something she knows she cannot have.

Paul has been in love with Georgina since the moment he laid eyes on her two years before, but he knows he isn't good enough for her and it can never be. But when he finds out she desperately wants to see a special exhibit in London, he agrees to take her. But can a stolen moment, a stolen kiss and a whispered confession lead to happiness or heartache?

A Marquis for Mary

Mary Quinn is almost at the end of her rope. After two years under her sister and brother-in-law's protection she may soon have to return to her terrible father's house if she cannot find a husband. In her desperation, she bumps into Edward, Marquis Woodley.

Drawn to each other, they are soon thrown into a scandal that leads to an engagement. But as the pair grow closer and their wedding looms, Woodley's past and the horrific circumstances of his first wife's death may keep them from the happy ending that will save them both

Quick right to the point Novellas

These were a nice addition to the series. I enjoyed them both, but Mary's story was definitely more in depth.

While I appreciate that these characters got their own stories, the stories skipped over a lot. And if you were hoping to see the club, Mama Flynn, or Marcus's mom, you will be sadly mistaken. As always, the sex was great. Men should read those parts to learn how to please a woman. We'll make it worth your time.....

Loved this two in one book. Enjoy author very much. Look forward to more. Soon.