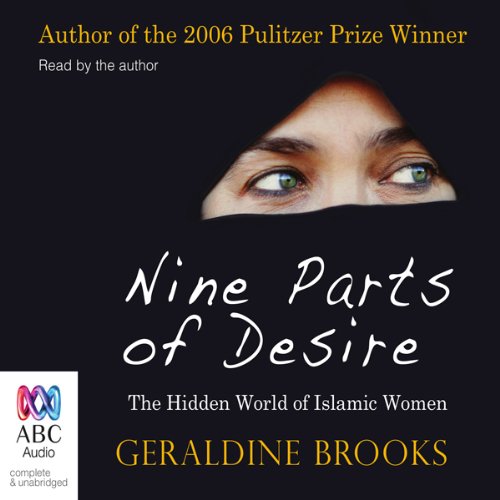 Nine Parts of Desire: The Hidden World of Islamic Women is the story of Brooks’ intrepid journey toward an understanding of the women behind the veils, and of the often contradictory political, religious, and cultural forces that shape their lives. In fundamentalist Iran, Brooks finagles an invitation to tea with the ayatollah’s widow—and discovers that Mrs. Khomeini dyes her hair.

In Saudi Arabia, she eludes the severe segregation of the sexes and attends a bacchanal, laying bare the hypocrisy of this austere, male-dominated society. In war-torn Ethiopia, she watches as a female gynecologist repairs women who have undergone genital mutilation justified by a distorted interpretation of Islam.

In villages and capitals throughout the Middle East, she finds that a feminism of sorts has flowered under the forbidding shroud of the chador as she makes other startling discoveries that defy our stereotypes about the Muslim world. Nine Parts of Desire is much more than a captivating work of firsthand reportage; it is also an acute analysis of the world’s fastest-growing religion, deftly illustrating how Islam’s holiest texts have been misused to justify the repression of women. It was, after all, the Shiite leader Ali who proclaimed that “God created sexual desire in ten parts, then gave nine parts to women.”

“Frank, enraging, and captivating.” ( The New Yorker)
“Powerful and enlightening...Brooks presents stunning vignettes of Muslim women...and carefully distinguishes misogyny and oppressive cultural traditions from what she considers the true teachings of the Koran.” ( Publishers Weekly)
“There has been nothing finer on the subject from a Western observer...she looks at it from the heart...mixing historical perspective with piercingly observed journalism.” ( Newsday)

I bought this a year ago and loved the first listen. I'm listening again, more actively this time, and learning so much.

I've had a lot of fear and ignorance about the Muslim world --it's history, it's women, etc. This book does a good job of explaining how things got to be the way they are. I particularly like the comment one character made about how the limitations imposed on women today stem from Mohammad's trying to keep the peace in his polygamous household.

I didn't know the story of Aisha and how her life's story is interpreted differently by different religious groups. Definitely one of many &quot;Ohhhh, I get it....&quot; moments.

I love the dovetailing of ancient history and recent modern history.

I am very curious about the lives of women in Islamic countries, that's why I bought this book but I got somehow lost among so many names and other unimportant information that permeates the narrative of very interesting facts. In my opinion, although the overall review of the book is good, Ms Brooks's reading is really discouraging! She reads in a very monotonous voice and doesn't pronounce the whole sentences in a clear and vivid way, as it should be to grasp the listener's attention. She reads her own book as if she was tired and bored of it. This book deserved a better performance.

Would you listen to Nine Parts of Desire again? Why?

I've listened to this book several times and found something new in each re-telling. It's powerful because much of the book is drawn from Ms Brooks' own experience, then it's coupled with some excellent research of the context. So the book has strong credibility. She's not judgemental in the telling - it's a finely drawn balance of experience, what others say, her opinion, and giving the other side of the story. Well done on this one!

What was one of the most memorable moments of Nine Parts of Desire?

The discussion about female genital mutilation, the clear assertion that this has nothing to do with Islam (which I knew - it's also practiced in other communities, includeing some christian communities; it's more a cultural practice). But it was Ms Brooks' lived experience in many islamic countries that makes the book memorable. Her descriptions of the 'unveiling' of women - their private lives.

I found I wanted to tap into this book at intervals. It was thought-provoking, so needed some 'soak time' to enable me to digest the messages.

Good on Ms Brooks reading her own book. Given it's her story that's appropriate. She's not the best narrator in the universe, but does a very reasonable job. Knowing it was her voice delivering her story and her message gives the book additional credibility in this audio version.

I would read this again.

I love Geraldine Brooks. I read "Year of Wonders" and was hooked on this author. She is also the narrator in that book as well. Geraldine is a superb author and, quite frankly, her voice soothes me. It does. I learned much about Islam and the dark under belly of that religion, but also the lives of women in the Middle East. Geraldine is my favorite author to day

Well worth your time

Geraldine spent many years living in the middle east meeting with the important men of the day and many of their wives or widows as well as the everyday women in all walks of life. She goes back to the Qumran and compares what it says with the various practices in countries. She follows successful women who take the veil as well as other women trying to throw it off.
It has been updated and she discusses the trend toward conservative thought.

Really didn’t care for the subject matter of this book. I’ve read many books like this one. Very sad and I feel for those women held in captivity in their own bodies. Just terrible.

This book was amazing, and informative but also very graphic in some parts. If you know & love Arab women, or just want a deeper look into their culture, this is a good choice.

The narrators voice is very engaging and I was led onward into the story because of her cadence and tone. The stories were troublesome and enlightening throughout the entire book! I am looking forward to listening to this non-fiction publication and have recommended it to numerous women friends! Thank you so much for such a thorough book for those of us who see this topic as an unknown territory. I think those who do know it will find it extremely informative as well!

To me, it sounds like a dissertation for a thesis. Very monotone in performance which leads my mind to wandering away from the story. All the chapters seem to have the same story, women are sexual beings and men can't hold themselves back--hence the women have to cover themselves- and how they allow each other to do so. Frequent references to how it was originally and how it is now-- very disheartening to me.

I love Geraldine Brooks writing! Her descriptions are poetic and flowing. Having said that, I cannot finish this book. Her voice does not make the book come alive and has a droning quality. It has all the entertainment value of a reluctant eighth-grader reading a history assignment, I really don't mean to be unkind, but Ms Brooks is a very talented writer and it would behoove her to spend the extra money to allow a professional reader bring her beautiful books to life. I am really sorry that I cannot finish this book, but I truly cannot always understand her since she drops her voice at the end of sentences and I miss many words.