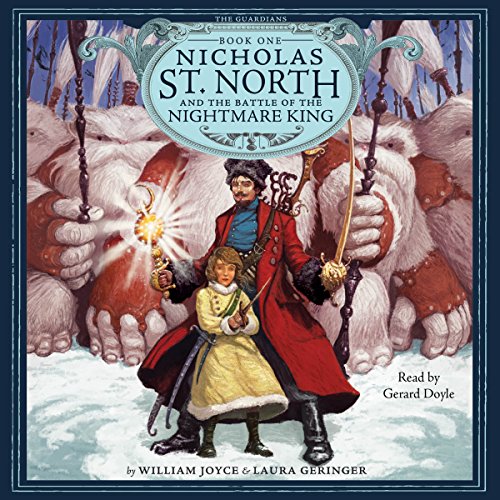 Nicholas St. North and the Battle of the Nightmare King

Before Santa was Santa, he was North, Nicholas St. North - a daredevil swordsman whose prowess with double scimitars was legendary. Like any swashbuckling young warrior, North seeks treasure and adventure, leading him to the fiercely guarded village of Santoff Claussen, said to be home to the greatest treasure in all the East, and to an even greater wizard, Ombric Shalazar. But when North arrives, legends of riches have given way to terrors of epic proportions! North must decide whether to seek his fortune... or save the village.

When our rebellious hero gets sucked into the chaos (literally), the fight becomes very personal. The Nightmare King and his evil Fearlings are ruling the night, owning the shadows, and sending waves of fear through all of Santoff Clausen. For North, this is a battle worth fighting... and, he’s not alone. There are five other Guardians out there. He only has to find them in time.

A Celebration of Imagination

From the hinterlands of Siberia to the height of the Himalayas. From wise old wizards and evil space pirates to Santa's rebellious teenage years. If you're familiar with Mr. Joyce's children books you know that his work is a celebration of imagination and this work is no different. Need proof? It's a story about rebellious Santa, the last survivor of Atlantis and a brave young girl going on a quest for a lost object once belonging to the Man in the Moon which is now houses in a monastery in the Himalayas. Oh, and yetis. Mustn't forget the Yeti's.

This book will fill you with a sense of child-like wonder at the world and all of it's beauty. What more can I say? Buy this book, you'll be glad you did.

Awesome also look up purple-shark-justice party. And the rest of the book was a great way to get to sleep now I have to go to bed at night right now

This is a fun version of Saint Nicholas' origin. It is full of magic, adventure, and suspense. It takes a character we all know and love and twists his backstory into something new and exciting.