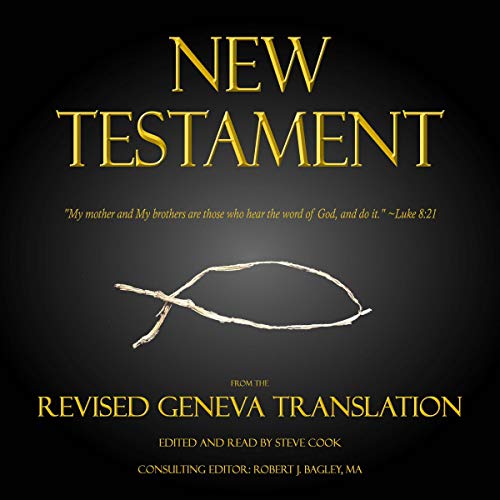 As featured on Bible Gateway, the Revised Geneva Translation of the Holy Bible is a faithful 21st-century update to the Geneva Bible of the 1500s, the very first widely distributed Bible in English. It was borne of an actor's need to memorize and speak Scripture out loud with specific meanings and inflections.

Just as in all preceding centuries, biblical text in the 1500s was meant to be heard and seen, as much as read, because so many of those who received it were illiterate (especially Gentiles) and needed to memorize it and speak it back to each other often in order to facilitate meditation.

The RGT was created with that in mind. It is specifically designed to be spoken and heard, repeatedly and is built on the premise that a crucial key to revival in the present can be found in one simple practice from the past: speaking God's word back to each other in community.

To that end, the RGT strives to preserve the textual cadence and poetry that is so essential to Elizabethan literature, while at the same time eliminating archaic and potentially distracting 16th-century words, phrases, and punctuation (such as employing the proper use of parentheses and quotation marks). It preserves the Geneva Bible's pioneering poetic style (i.e. beginning every verse on a new line - which aids tremendously in memorization).

However, unlike the Geneva Bibles of the 1500s, there is no commentary or other human adornment. The RGT intentionally omits these things and makes single interpretive choices, based primarily on the translations of William Tyndale and F.H.A. Scrivener. The study of textual variants is left to other Bibles more properly suited for that purpose. Again, the particular purpose of this Bible is to encourage the speaking, hearing, and sharing of the simple, powerful, illuminating Word of God alone (Luke 8:21).

In scholarly terms, the RGT is a formal or complete equivalency, based on the Byzantine text-type family of ancient Greek manuscripts. At this writing, the RGT is one of only a handful of modern translations of the New Testament to be so. Most others (including the NASB, ESV, NIV, Passion, and NLT) use the shorter Alexandrian text-type family of Greek manuscripts as their base text.

It is our hope that this project will be a living and active Bible for this generation, built for hearing and doing (Matthew 7:24), and that it will be profitable for teaching, convicting, correcting, and instructing in righteousness (2Timothy 3:16).

"[T]hat your faith might not be in the wisdom of men, but in the power of God." (1Corinthians2:5)