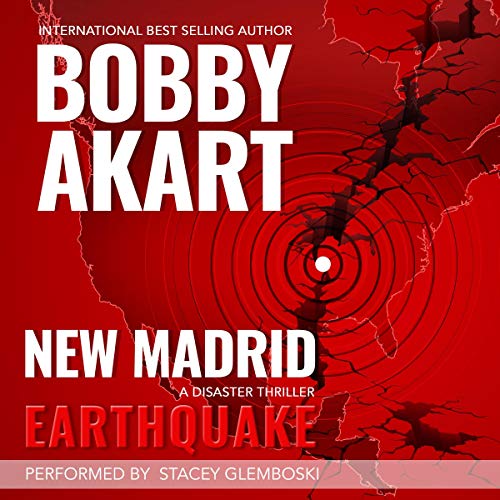 In the not too distant past, along the Mississippi River, North America tried to tear itself in half.

It failed. It won’t the second time.

New Madrid Earthquake is a stand-alone disaster thriller from international best-selling author Bobby Akart, one of America's favorite storytellers who has delivered up-all-night thrillers to readers and listeners in 245 countries and territories worldwide.

Two hundred years ago, several faults within the New Madrid seismic zone along the Mississippi River ruptured triggering some of the largest earthquakes in American history. The three massive quakes ripped open America's Heartland, shaking residents as far away as New York City and Washington, DC, while ringing church bells in Boston and Charleston, South Carolina.

Akart's stand-alone novel New Madrid Earthquake is based on actual events. It just hasn't happened yet, until now. Two hundred years later after the historic quake sequence of 1811-12, it's reawakened.

The New Madrid fault zone, six times larger than the San Andreas in California, has generated a series of massive earthquakes thrusting the Atwood and Chandler families in a fight to survive. Attorney Jack Atwood and his brother-in-law, Tony Chandler, are winding up their year-end tax-planning presentation atop The Met, a skyscraper in St. Louis, before returning to Memphis for their family's Christmas celebration. Jill Atwood, her daughter, Emily, and teenage son Tate are in a downtown Memphis performing-arts theater attending the dress rehearsal for Emily's Christmas pageant. Beth Chandler, 28 weeks pregnant, together with her three-year old autistic son, are traveling from Louisiana to join the rest of the family in Memphis.

Prepare to be shaken.

Too slow, to much unnecessary diatribe

Had to return. The professional characters explaining what could, what did and will happen got boring fast. The other characters just seem to talk and react out of character of real people. And if I hear the narrator say “Mum” as a British accented “Ma’am” one more time.....

I enjoy Bobby Akart’s work and his storylines are always good, and this one is as well. Unfortunately, the dialogue between characters was often silly and sappy and the narration was difficult to listen to at times.

I really enjoyed listening to this book. Part of my enjoyment is the fact that the setting is in the middle of the country, an area that most people consider a boring flyover area.
This book had my adrenaline rampaging as the characters ran from one disaster into another. I also enjoy the details concerning the seismic activity and history. I always feel like I’ve learned a lot after reading one of Bobby Akart’s books.
My only complaint is that I want to know what are the long term consequences to the characters, cities and USA.

Edge of Your Seat Excitement!

One of the best action, adventure books I've listened to!
Great Characters! Couldn't wait to find out what happens next! As always, the research is spot on!

Bobby Akart always delivers a gripping story interspersed with scientific and historical facts. You are learning without realizing you are getting a lesson. These characters are so real, I feel like I might have met them. I have to admit that I put off listening to this story because as a native of the area I am used to hearing so many speakers, newscasters, and narrators, butcher the pronunciations. Thank you Stacy Glemboski for getting it right!

Bobby you are so awesome the book was killer cool because we can only imagine how bad it could be if it happened in modern time. Keep it up Sir you are the best. AAAAAAAAAA++++++++++

New Madrid is a great read that spotlights Bobby Akart’s excellent research and storytelling skills. This is a thoroughly enjoyable read that provides both caution and hope.

great story, plenty of action with no cursing

loved the charactors and hope we hear more from the families featured. warmly reccommended. love the balance between the action at the different sites and the imputation from the scientists which fit well and was woven in with likable charactors. 5 stars for the author and 5 for the narrator

As with all of his books - this story is oh so possible. When I listen to them I try to imagine myself in that scenario and what would I do.
I also take mental notes on what his characters do.
Thank You Mr Akart for another great story

I have listened to the audio of all of Bobby's books and I consider this the best book one to date. Really well done.