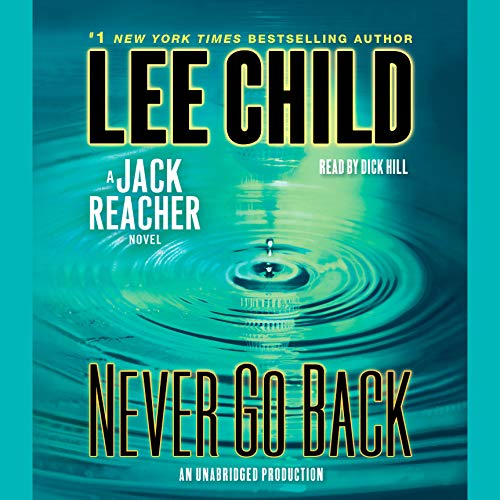 Never go back - but Jack Reacher does, and the past finally catches up with him.... Never Go Back is number-one New York Times best-selling author Lee Child’s new novel of action-charged suspense starring "one of the best thriller characters at work today" (Newsweek).

Former military cop Jack Reacher makes it all the way from snowbound South Dakota to his destination in northeastern Virginia, near Washington, D.C.: the headquarters of his old unit, the 110th MP. The old stone building is the closest thing to a home he ever had.

Reacher is there to meet - in person - the new commanding officer, Major Susan Turner, so far just a warm, intriguing voice on the phone.

But it isn’t Turner behind the CO’s desk. And Reacher is hit with two pieces of shocking news, one with serious criminal consequences, and one too personal to even think about.

When threatened, you can run or fight.

Reacher fights, aiming to find Turner and clear his name, barely a step ahead of the army, and the FBI, and the D.C. Metro police, and four unidentified thugs.

Combining an intricate puzzle of a plot and an exciting chase for truth and justice, Lee Child puts Reacher through his paces - and makes him question who he is, what he’s done, and the very future of his untethered life on the open road.

"Child is a superb craftsman of suspense." ( Entertainment Weekly)
"The truth about Reacher gets better and better." (Janet Maslin, The New York Times)

another reacher i could not put down

i read enough reviews of the most recent reacher offering to think that childs had gone soft on plot in service of political commentary, so I skipped #17. many thanks to reviewers for the helpful notes on #18. this is a great addition to the series. the title is perfect - the one thing you are saying after reacher goes back to his old unit and **early plotline but not critical spoiler alert** gets reinstated in order to face felony charges is that jack, you should never go back.

there were three sequences where reacher was breaking bones, and i thought the narrative did not need to be so graphic. that was a minor complaint. the plot twists and turns in this were clever and as good as any i have seen in the 6-7 reachers i have done on audible.

the samantha character was great.

the tell at the end - the underlying scheming that put everything into motion - was fine but not nearly as strong as the rest of the book. and as i captioned the review, i could not put this book down.

someone confused the narrator with scott brick. this is not a brick narration, but rather dick hill, who has a very different style. (i happen to like both.) when dick hill is at his best, he is the best. this was a great narration by hill, especially including the female voices.

No one loved Jack Reacher more than I did, at least for the first 6 or 7 installments. The plots were taut and unexpected, our hero intriguing and the wit as dry as the Mojave. But these wonderful books have devolved into self-parody. This novel has a ridiculous plot -- with such risible features as an inflight brawl in an airplane restroom. As if two small people could fit in one of those, much less the Frigidaire-sized Reacher and his opponent! Also, Reacher has theories about himself that involve campfires and howling wolves and he's happy to share them. The mystery of Reacher's stunning fitness (the man eats pancakes and cheeseburgers exclusively, logs countless hours riding around in cars and never so much as skims a gym contract) is explained, basically, as "born this way". I am very very sorry to be unable to recommend this book.

"Expect the Best, Prepare for the Worst" becomes a theme through this book, but no need to prepare for the worst--this story is awesome.
I've listened to all 18 of the Reacher series over the last three years, and Lee Child continues to shine as the creator of Jack Reacher in #18.
As a Jack Reacher fan, all the great qualities are there:
--Lee Child keeps it clean while keeping the action and the story riveting.
--He makes Reacher multi-layered and complex by having Reacher cracks skulls of bad guys, then in another scene, out smart the bad guys through his knowledge of body language, human behavior, math, and yes, even poetry.
--He reveals just a touch of Reacher's soft side.
--He continues to unfold details of Reacher's past, weaving together a complete character that gets better and better with each book.
--Throws in just a bit of humor that makes Reacher human.

The ending did feel a little "quick." I wish the action had been drawn out more, but to me, that's just a sign of a great book. I never want a great book to actually end.

If this is your first Reacher novel, you'll miss out on a few "insider" jokes, like the folding toothbrushes. But overall, you certainly would be able to follow the story and enjoy it.

As for the performance, as usual, Dick Hill is perfect. I think a narrator should disappear and let the story shine and Hill does that. As usual, I'm super impressed with his female voices, you don't even notice him which leaves you free to just enjoy the story.

As with most Reacher fans, I was disappointed with #17, but Lee Child is back and better than ever.

Reacher has been such a great series, but I think the plots, action and women are wearing thin for me. That isn't to say I won't be ready for the next one when it comes out but for right now I am glad the series is out of unheard books.

If you have ever enjoyed a Jack Reacher novel, give this one a miss. A more frustrating audio novel I have never encountered. It's as if Lee Childs were getting a penny a word like the old-time journalists used to earn. There's more useless detail in this novel than you could possible imagine. Who is interested whether the heroine's boots are under the chair and Reacher's jacket on the back of the chair when it has nothing to do with the plot. Speaking of which, I'm sure the plot is fascinating, but the snippets are so few and far between as to be laughable.The premise of Reacher's returning to his 101st command base because of a voice on the phone is weak enough, but the rest of the plot unfolds with glacial speed and I find myself longing for the hardcover so I can skim.

Where has Lee Child gone?

I was hoping beyond hope that Child's last book (Wanted Man) was a fluke. I thought that he got the terrible writing out of his system and now he will be back in form. Unfortunately this new book is nearly as bad. The only blessing is this time we didn't have to listen to Reacher speak with a broken nose. I am no longer willing to sit through the seemingly endless redundant dialogue to get a couple of minutes of my "Reacher fix".

Come back to us Lee!!

What did you love best about Never Go Back?

Great story. Almost as good as Killing Floor - which is my favorite

Have you listened to any of Dick Hill’s other performances before? How does this one compare?

Dick Hill is one of my favorite narrators. I intentionally search for books he has read and have tried new authors solely because he is the reader.

I can not wait for the next Reacher book, I have enjoyed every one and recommend them to anyone who has never picked up a Lee Child book.

I wanted to be fair. I wanted to not think that an ex-TV guy that landed (all too briefly) on a great series idea/character, would not let his resultant villa in the South of France dilute his ability to write. So I waited a few months and read/listened to it again, and it just gets worse. Child (or whatever his real name is) likely pays someone to write this melba toast blather. And poor old Dick Hill, who was ill-fitted from the start, is sounding older than ever and decidedly unlike a middle-aged butt-kicker/philosopher.
The simple formula of happening across a wrong to right, then mowing his way through the obstacles like a rototiller after cleverly discerning the 'clues', has seen far better days. And it happened several books ago. I am astonished that late-comers even stuck around. I'm afraid Lee Child (or whatever his name is) has sunk his hooks into the 'dumbing down of the American gray matter' and the teeming masses just do not know any better.
I think those of us with any integrity left and understand what good writing can be, will reject this sub-par formulaic tripe and head for greened pastures.

Back in the Army?

This book is an improvement over the last few books but does not reach the quality of the first few books in the series. It is better to have read the books in order but one still gets the idea if this is the first of the series you have read. In this book Reacher arrives in Virginia at the Military Police Base he once commanded to see Major Turner who he has met on the phone in the book before this one. He wants to invite her out to dinner. Only she is in jail herself for taking bribes. The temporary C.O. want to see Reacher, he informs him he has two charges against him and he is back in the Army. Reacher sets out to clear himself and Turner from the charges. From here the stories suspense and action build but toward the end of the book it starts to lag a bit. For the Reacher fans he is fighting two men with his hands behind his back and other almost unbelievable feat of action. This story also has Reacher doing his usual tricks with math but also reciting poetry. For Reacher fans most will enjoy the story. Looking forward to the next book.

I would recommend the audiobook. It has a plausible story line and enough hook to keep you wanting to continue.

What was one of the most memorable moments of Never Go Back?

I loved the interaction with the Samantha Dayton character. I thought it was really funny that one of the bad guys in the book is named David Baldacci.

Relaxing to listen too

If you like the Jack Reacher series I recommand you to listen to the versions by Dick Hill. He reads it very well and it is pleasant to listen to