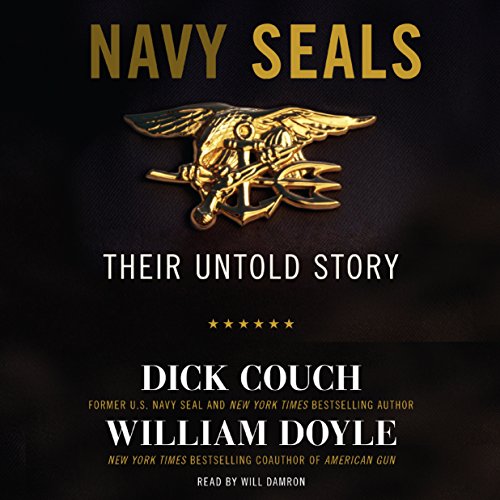 Written with the unprecedented cooperation of the Naval Special Warfare community, here is the definitive history of the U.S. Navy SEALs, a thrilling chronicle that reveals the inside story behind the greatest combat operations of our nation’s most celebrated warriors. New York Times best-selling authors Dick Couch - former SEAL, Vietnam veteran, and highly respected military writer - and award-winning author William Doyle draw on exclusive interviews with more than 100 special operators (including multiple Medal of Honor recipients), as well as thousands of pages of declassified documents to create a vivid, unparalleled portrait of the SEALs in action.

Navy SEALs: Their Untold Story charts the dramatic evolution of the frogmen from their origins in World War II, when the daring Naval Combat Demolition Teams, Underwater Demolition Teams, Scouts and Raiders commando units, and OSS Operational Swimmers proved instrumental at D-Day, Okinawa, and many other critical campaigns. In the Korean War, the Navy UDTs cleared mines and scouted landing sites ahead of the main American forces. After their official founding in 1962 by order of President John F. Kennedy and early covert operations in Cuba, the SEALs came of age in the jungles of Vietnam, where they specialized in executing the most daring missions. Couch and Doyle trace their transformation in the 1980s and 1990s when America’s special operations teams were centralized under the U.S. Special Operations Command - including untold accounts from Panama, Grenada, Somalia, and the first Gulf War. Finally, we follow their rise to preeminence in Iraq and Afghanistan after 9/11.

The SEALs and their forefathers have shaped the tides of history; from fighting Hitler to eliminating Osama bin Laden, the frogmen of the U.S. Navy are the spearhead of American military might: the toughest, most highly trained, best equipped, and most invisible band of warriors.

this was a great book which covered the Navy seals from world war II through Korea, Vietnam and the current conflicts in the middle East. great history on all of the great men who serve to make the Navy seals what they are today

All I could wish for is for the disrespectful youth of America to wake up and learn brave Americans have lost lives for the youths and ignorant to display their true in American disrespect.

Great Overview of the SEALs

Great history and overview of the SEALs. Narrator was really good. Dick Couch is a great writer and excellent with the stories of NSW. While there are other books that have far greater detail (as they are meant to), this book is excellent at giving the high level overview of the history of the teams as well as some great highlights and stories through out. Excellent read... Well worth the investment.

Very informative book about the SealsYes and I hav

Yes and I have this is a great introduction to anyone who has questions about the SEAL comunity.

This book doesn't have a central character. But if I were to choose one it would be Chris Kyle or Marcus Luttrell.

What does Will Damron bring to the story that you wouldn’t experience if you just read the book?

he does a nice job reading complicated or wordy material at times and he changes his tone to highlight different characters.

No but I don't do that anyway.

It was a great book to learn about the SEALS and what they do and how they are made.

Not horrible not great.

The narrator consistently pronounced things incorrectly which was distracting and annoying. Story was slow enough in parts I actually fell asleep.

Listening to the stories of how Navy SEALS began and how their humble origins have morphed into a prestigious group of warriors is an honor.

A history of the seals should have a mention of Dick Marchinco. Just my thought.

Good book and narration. would recommend too those with an interest in the Navy Seals.

This is a great account and tribute to the history of the SEAL community. I would recommend this title to all Americans

totally worth the time

sometimes a bit slow. but there are a lot of interesting background information.
Totally worth checking out