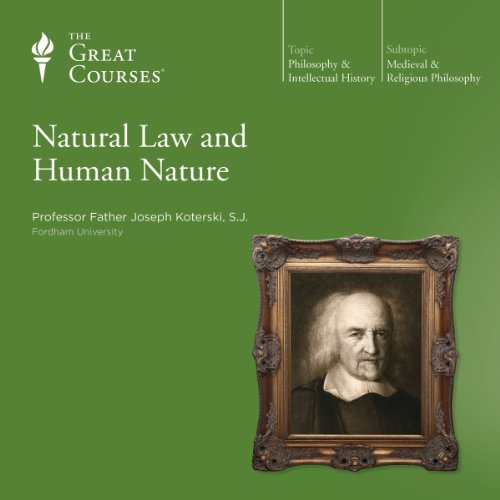 Natural law is the idea that there is an objective moral order, grounded in essential humanity, that holds universal and permanent implications for the ways we should conduct ourselves as free and responsible human beings.

These 24 in-depth lectures consider the arguments for natural law, the serious objections that have been raised against it, and the ways, despite all overt criticisms, it remains a vital and even pervasive force in political, moral, and social life today, even while traveling under another name.

Shaping Father Koterski's historical treatment is an appreciation of just how much thought, effort, and brilliance went into formulating and defending the crucial insights of natural law theory. Among other things, you'll look at: the virtual dialogue that took place between the Ionian scientists, the Sophists, and their great interlocutors, Socrates, Plato, and Aristotle; Thomas Aquainas's Summa Theologica, which sets out the account of natural law as that type of law through which humans take part according to their nature as free, intelligent, and responsible beings; the ways, by the American Founders' design, natural law thinking is poured into the foundations of our republican experiment in ordered liberty and constitutional democracy; and the criticisms leveled against natural law by Descartes, Rousseau, and Kant.

Finally, Father Koterski asks whether modern evolutionary biology can claim to have discovered truths about human nature that render natural law theory unintelligible, whether the findings of anthropological research undercut natural law, and whether accepting the idea of natural law means accepting the existence of God and vice versa.

This is not a work about the history of natural law theory. It is a work of conservative Christian apologetics disguised as an academic course. Koterski briefly refers to various views before descending into anti-gay, anti-choice, profoundly conservative promotion of his own views. He uses the tools of oversimplification and straw man arguments to try to push his worldview - a profoundly regressive, anti-human worldview - and it's a real shame the Great Courses saw fit to release this course.

The thing that makes this really bad is, he's a good speaker and he has a knack for making appalling, non-scientific, irrational claims sound rational if you're not paying careful attention. This is absolutely a Trojan horse, a work of propaganda.

the first 20 lectures were a good historical overview of natural law, but the presenter loses his objectivity in the last 4 lectures and presents a biased presentation of anti-abortion, anti- stem cells, and anti- homosexuality under a false pretense of rationality and objective truth. very disappointing end to what started as a good course. I would have been fine if he presented both sides of these complex issues with fair treatment, but fear he was too strongly swayed by his personal religious beliefs to see the contrary viewpoints as anything but wrong.

I was worried at first that a Priest would stick to the Catholic Doctrines (I am Catholic myself). But, Fr. Koterski gave a very fair presentation of this most interesting subject. He was very good, no excellent as narriatior as it was very clear to me that he had a firm grasp of the subject matter. An excellent read.

This lecture series is excellent. I highly recommend it for anyone involved law or medicine. With the advancement in medicines and Artificial intelligence one is going to need some foundation to help them make ethical decisions concerning human rights. I feel this course is an excellent tool for understanding and making these decisions

This was an excellent introduction to a often neglected philosophical tradition. Father Katerski does a good job tracing natural law through history, though at times I wished he'd given more anecdotal evidence of the ways natural law turns up in societies around the world. Natural law undergirds the laws of the world's democracies, and it would bode well for modern people to realize ethical truths natural law provides.

The reviewers who rate this lecture series poorly because of Father Katerski's supposed 'conservative christianity' fail to realize that they themselves are unable to escape the profound subjectivity which dominates in the psychologized ethical discussions of the present. Father Katerski is saying something reasoned and observable, and they just don't like it.

This was a very good overview of the principles and history of natural law theory. The last few lectures apply natural law reasoning to modern issues, which is helpful.

Okay but longer than it needed to be.

The course had good content but it could have been delivered in fewer episodes. The delivery was at times repetitious (for example, the segments relating to whether natural law requires the existence of God as a given and the segment on the Intelligent Design movement). The PDF outline and bibliography was very helpful.

In the Tradition of Great Jesuit Erudition

Fr. Koterski SJ delivers once again a strong, comprehensive and flavorful lecture. Excellent citations of evidence from primary and secondary sources of history, political science, philosophy, psychology as well as personal experience and encounters. This man can teach. I am amazed that he can communicate his encyclopedic knowledge with clarity and coherence about such a rich topic as natural law ....it is such a beautiful piece of wisdom but now viewed with suspicion and contempt by popular culture. He presents a balanced understanding of the issues and gives a clear case for natural law throughout history but also addresses the objections in a respectful and fair manner. This course should be given in all law schools and political science curriculum.

Good except for the interpolations

Koterski was good on the history of natural law philosophy. He also did well on showing how natutal law has factored in jurisprudence. The problem with the presentation is the many interpolations of his theological agenda into the presentarion. His attempt to make the case that heterosexual marriages were best for child rearing was weak and often question begging. And his attempt to try to dismiss the relevance of personhood in the abortion argument utterly failed. Otherwise his presentation was informative and worthwhile.

I was concerned there would be too much theology in this philosophy course. Too some extent, I was right. However, it was still pretty good. I learned from it and it caused me to think about done things in ways I had not before. I was not convinced by some of the defenses of natural law made by the lecturer, but it is a rich subject.