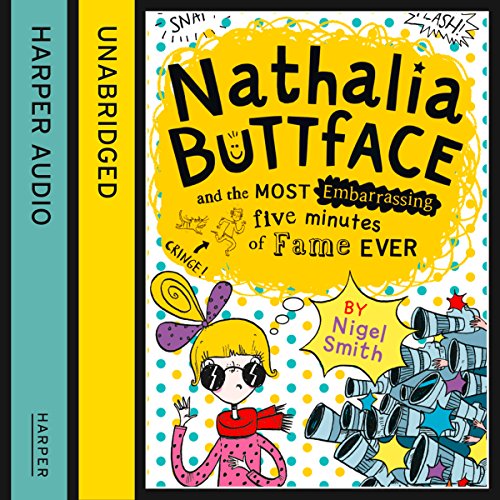 Nathalia Buttface and the Most Embarrassing Five Minutes of Fame Ever

The most embarrassing dad in the world is back in this hilarious series for girls from TV and radio-comedy writing talent Nigel Smith.

When Dad posts an embarrassing video of Nat online as a joke, she’s furious. Things are set to get much worse, however, when the video goes viral and she finds herself centre of the nation’s attention for all the wrong reasons - even the prime minister is imitating her!

But when a local care home for abandoned pets is threatened with closure, Dad convinces Nat to use her newfound celebrity to raise money for it - with him acting as her agent, of course! Cue: a disastrous appearance hair-modelling job, a not-so-glamorous campaign for a local optician and a call to turn on the town’s rubbish autumn illuminations (the one with the miserable face off The X-Factor cancelled at the last minute).

And as if Nat didn’t have enough to deal with, school isn’t exactly easy when you’re a minor celebrity….