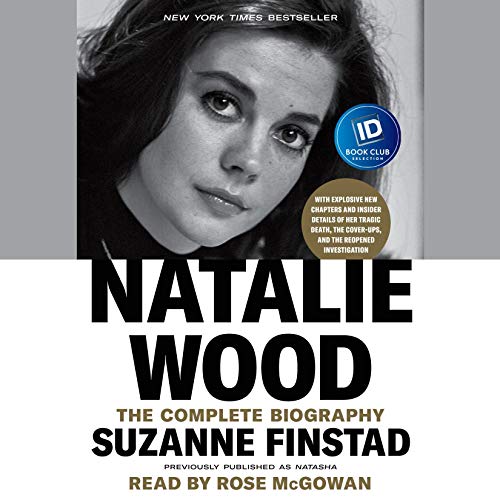 New York Times best seller • The definitive biography of a vulnerable and talented actress, now with shocking new chapters including the reopened investigation into her mysterious drowning.

Natalie Wood has been hailed alongside Marilyn Monroe and Elizabeth Taylor as one of the top three female movie stars in film history. We watched her mature on the movie screen before our eyes in classics such as Miracle on 34th Street, Rebel Without a Cause, Splendor in the Grass, and West Side Story. But the story of what she endured, of what her life was like when the doors of the soundstages closed, had long been obscured.

Thirty years after Natalie Wood’s death, the LA Sheriff’s Department reopened the investigation into her drowning using Finstad’s groundbreaking research and chilling, hour-by-hour timeline of that tumultuous weekend as evidence. Within a year, the LA Coroner changed Natalie Wood’s death certificate from "Accidental Drowning" to "Drowning and Other Undetermined Factors." In 2018, the Los Angeles Sheriff’s Department officially named Wagner a "Person of Interest" in Wood’s death.

In this updated edition, Finstad will share her explosive findings from the last two decades. With her unprecedented access to the LASD’s "Murder Book", ignored by the original investigators, and new witnesses who have never spoken publicly, Finstad uncovers what really happened to Natalie Wood on that fateful boating trip in 1981 with Wagner and Christopher Walken. She expands on intimate details from Wood’s unpublished memoir, which affirms her fear of drowning and the betrayal by Wagner that shattered their first marriage.

Finstad tells this heartbreaking story with sensitivity and grace, revealing a complex and conflicting mix of fragility and strength in a woman who was swept along by forces few could have resisted.

“Gripping . . . a sad, penetrating portrait that juxtaposes the storybook myth that made Wood a popular movie actress and the real story of what happened once the cameras stopped rolling.” (The New York Times Book Review)

“A spectacularly comprehensive, moving, shocking, and riveting book. It has put together many pieces of the puzzled life Natalie and I led, and helped me understand what I had not been able to see for myself.” (Lana Wood, Natalie Wood’s sister)

“A poignant, intensely sympathetic portrait of the vulnerable, sensitive little girl who grew up to be the quintessential Hollywood star.” (Los Angeles Times)

Natasha: Chronicle of a Death Foretold

This is a very well written investigative biography of Natasha Zakharenko, the person who became actress Natalie Wood at the tender age of 6. Born in California to Russian immigrant parents, she was thrusted into acting by a ruthlessly ambitious mother, obsessed with making her a star. Much of the book focuses on the split between the glamorous, fantasy persona that Natasha was forced to embrace early on and her more intimate self, who struggled in her search for independence and meaning, sometimes through rebellious behavior. I knew little about her before running into this audiobook, but was drawn to those dark, magnetic eyes, and was surprised to find a beautiful, but tragic story that reads like a haunting novel.

There are many interviews with people that knew her well, including her sister, Lana Wood, who plays a major role in helping decipher the actress. We learn of Natalie Wood's relationships with personalities such as Dennis Hopper, James Dean, Robert Redford or Warren Beatty, some of whom became important friends or lovers. Several figures emerge as villains, in particular her abusive and controlling mother, Maria, and Natalie's two-time husband, Robert Wagner, whom author Suzanne Finstad accuses of murder. The actress drowned to death under mysterious circumstances at the age of 43 and from the start, this book gears up to explain how this came to happen. Also present on the boat where the actress was last seen were actor Christopher Walken and Dennis Davern, the yacht's captain, both of whom are accused here of hiding the truth. (Davern, in particular, is an unreliable sort, who has already changed his account of the events of that night several times.) Others, like Frank Sinatra or director Nicolas Ray, are said to have been sexually involved with Natalie (who was well over 20 years their junior) when she was only 15 or 16. She remained friends with them afterwards, despite what would have legally been statutory rape. It's a complex story and the author has made it her mission to point her finger at people that she believes did Natalie wrong.

To be fair, this is a thorough biography and it didn't only focus on the negative. I felt moved by Natasha / Natalie Wood, who is presented as a very intelligent, hard-working perfectionist, who charmed personal acquaintances and audiences alike. She became one of the most sought-after actresses and was nominated to three Academy Awards for Rebel Without a Cause (1955), Splendor in the Grass (1961) and Love with the Proper Stranger (1963). Her work in Miracle on 34th Street and West Side Story, among other films, was also celebrated. Yet, one has to wonder to what extent she wasn't perhaps a prisoner of her mother's superstitions and aspirations to become part of Hollywood's royalty, or a pawn in a world dominated by social networking and influence. Most of the audiobook feels like a character drama, as it's dedicated to describing the kind of person that Natasha / Natalie was and the challenges that she faced, particularly in finding her true self in a celebrity world of glitter and make-believe. This take on the actress's life is laid out eloquently by the author and apparently backed by Lana Wood. While listening, I often asked myself whether Natalie would have agreed with their perspective. The last four hours of the audiobook are focused on the events that led to her dreadful end. The genre in this last part is true crime, but it feels like noir. It is impossible to assert whether Finstad is correct in her allegations against Wagner, but they certainly raise a lot of unanswered questions. To accuse a mourning widower of having killed his beloved wife is an extremely delicate matter. On the other hand, this doesn't mean that a strange case such as this one shouldn't be investigated, as Finstad has done. It all boils down to whether Wagner really did it or not and only a proper trial could potentially decide that.

Rose McGowan's narration is quite acceptable, but feels somewhat uneven and mechanical. Still, her pronunciation is very clear and it didn't pose a major problem for me. The author also reads some chapters and one can sense in her voice her determination to bring this case to justice. I found it a very compelling listen.

Loved listening and found myself so captivated that I finished it in 2 days.

Had me excited about the HBO documentary coming out in May2020

Suzzanne, This was an amazing story you investigated and told. Natalie Wood was finally spoken for.

I was hooked from the beginning. Rose McGowan has a clear, precise voice. Suzanne Finstad does honor to the talented and tragic Natalie Wood with her riveting and heart wrenching story.

As Advertized... A Complete Biography

This biography offers all the facts with very little sparkle or intimacy. Worth listening, but nothing special.