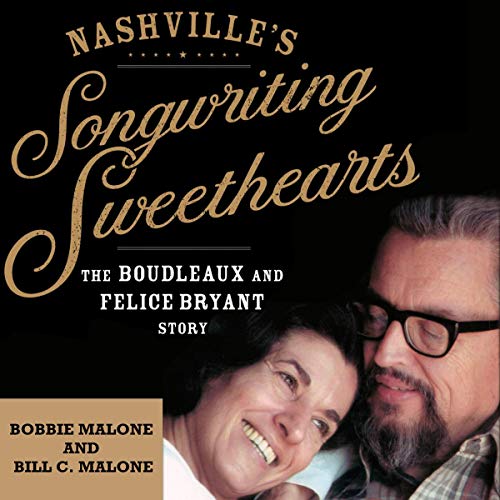 You might not know the names of Boudleaux and Felice Bryant, but you know their music. Arriving in Nashville in 1950, the songwriting duo became the first full-time independent songwriters in that musical city. In the course of their long careers, they created classic hits that pushed the boundaries of country music into the realms of pop and rock. Songs like “Bye Bye Love,” “All I Have to Do Is Dream,” “Love Hurts,” and “Rocky Top” inspired young musicians everywhere. Here, for the first time, is a complete biography of Nashville’s power songwriting couple.

In Nashville’s Songwriting Sweethearts, authors Bobbie Malone and Bill C. Malone recount how Boudleaux and Felice, married in 1945, began their partnership as itinerant musicians living in a trailer home and writing their first songs together. In Nashville the couple had to deal with racism, classism, and in Felice’s case, sexism. Yet through hard work and business acumen - and a dose of good luck - they overcame these obstacles and rose to national prominence.

By the late 1990s, the Bryants had written as many as 6,000 songs and had sold more than 350 million copies worldwide. They were inducted into the Nashville Songwriters Hall of Fame in 1972, and in 1991 they became members of the Country Music Hall of Fame - a rare occurrence for songwriters who were not also performers.

"The best book on the Tulsa tragedy of 1921 to come out in the past twenty years, or possibly ever." (Alfred L. Brophy, author of Reconstructing the Dreamland: The Tulsa Riot of 1921 - Race, Reparations, and Reconciliation)