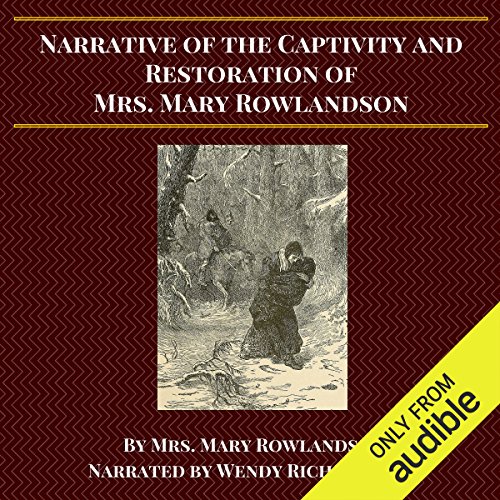 Narrative of the Captivity and Restoration of Mrs. Mary Rowlandson

A Narrative of the Captivity and Restoration of Mrs. Mary Rowlandson is the harrowing first-person account of one mother's struggle to survive after she and her children are attacked in their home and captured by Native Americans during the winter of 1675. Set against the backdrop of King Philip's War, Mary Rowlandson offers a compelling, detailed, and often gruesome account of the assault upon her Massachusetts village, the habits and customs of the Native Peoples with whom she lived for 11 weeks, her own meeting with King Philip himself, and her eventual redemption and freedom.

First published in 1682, Mary Rowlandson's memoir was read widely in the American colonies and in England. It was reissued four times in its first year of publication and is widely considered to be America's first best seller.

I couldn't get through the reading myself- the material was way too drab, however the narrator's animated voice helped me muddle through tremendously! And catch the tone of the price that I couldn't gather when reading on my own!

They Eyes Are Open

Mrs. Mary Rowlandsons’ narrative is quite informative of the times of her life and captivity, but with shocking and fearful accounts leave you to appreciate what one takes for granted.

A harrowing true story.
Very well read. It seems as if Mary Rowlandson is narrating her own biography.

This was frankly and truthfully told. very heartbreaking circumstances but she is able to keep the glory on God. I recommend this to anyone.

I am in awe at her. She held onto God because she knew He was holding onto her.

I purchased this because I have ancestors from that time and place who were captured by Native Americans, and I expected to learn what it was like. I did learn that and also learned how much this woman depended on her faith and knowledge of scripture in order to survive constant near starvation and threat of death. The description sounds similar to the torture of Christians by ISIS now so I believe it gave me an insight into that also. "God is an ever present help in time of trouble. "(Psalm 46:1) Great book! Thanks for putting on Audible!