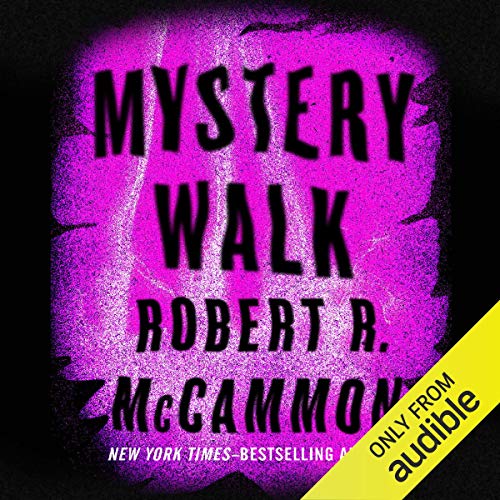 Born and raised in rural Alabama, Billy Creekmore was destined to be a psychic. His mother, a Choctaw Indian schooled in her tribe's ancient mysticism, understands the permeable barrier between life and death - and can cross it. She taught the power to Billy, and now he helps the dead rest in peace.

Wayne Falconer, son of one of the most fervent tent evangelists in the South, travels the country serving his father's healing ministry. Using his unique powers to cure the flock, Little Wayne is on his way to becoming one of the popular and successful miracle workers in the country. He helps the living survive.

Billy and Wayne share more than a gift. They share a dream - and a common enemy. They are on separate journeys, mystery walks that will lead them toward a crossroads where the evil of their dreams has taken shape. One of them will reject the dark. The other will be consumed by it. But neither imagined just how monstrous and far-reaching the dark was or that mankind's fate would rest in their hands during an epic showdown of good versus evil.

From the author of Gone South, Boy's Life, and the Matthew Corbett series, a master of suspense who has won the World Fantasy and Bram Stoker Awards, Mystery Walk offers "creepy, subtle touches throughout [and] splendid Southern-town atmosphere" (Kirkus Reviews).

I have read many of Mr. McCammon's books and other than 'Boy's Life', and 'Wolf's Hour', this one is my favorite. There are stories within stories. The book is over 60 chapters long and there is not one dull moment in the entire book. There are emotional roller coasters and incidents of love,hate, ignorance and hope all at the same time. You could listen to it all at once but wouldn't recommend it because it's a book that should be savored and enjoyed because such books don't come along often. The narrator was outstanding. There were many characters in the book and never were you confused as to who was speaking. He brought the story to life and made you feel as if you were there. If you are a fan of this genre read this book next.

I like McCammon, and I thought the premise of this book looked awesome. It was much slower than I hoped for. I'm glad I finished it, but not sure I'd recommend it.

Solid effort from one of the best in the business

A super solid effort from one of the best in the business. I listened to this one and it really translated well to the audio format. The narrator did and excellent job. Great tone and pacing. The story itself is classic McCammon. A supernatural, coming of age, good versus evil tale of travelling small town horror. I think the story itself is about a 3.5 Star story (good with a lag here and there) but the narration really elevates it and gave it another layer of depth of character for me. I dug it.

Well done. At 1st I did not like the narrator but as he progressed into the story and adopted more personality with the did characters I enjoyed him more. He did very well and of course the story was well done and well-thought-out. A little long winded at times but it really gave you a good sense of the characters. A lot of righteous anger at ignorance Which made me want to reach out and choke a few characters . His shape changer reminded me of the evil presence in Swan song a lot making me wonder if he intended that to be.

The Epic Battle Between Good & Evil!

MYSTERY WALK is a story involving the epic battle between good and evil and Robert McCammon does these types of stories better than almost anyone.

I won't get into the plot much, as this book was written back in the 80's and hundreds of other reviews already do that. I will say that this is my fourth time reading this book, (I actually listened to it, courtesy of the narrator Nick Sullivan), and this time it affected me even more than it did previously. I'm not sure why that is-perhaps as I've grown older I see more truth and depth in this tale?

It could also be the fact that the narrator brought these characters alive for me. I easily pictured the small town of Hawthorn and both its hateful and sweet residents. I vividly pictured the tent revivals of J.J. Falconer and the bogus claims of healing from his son Wayne. (I had to try hard NOT to picture Wayne's first bout with healing, you'll see what I mean if you read this.) Mr. Sullivan's voicing worked really well for me here and for this reason I've bumped my rating of 4 and 4.5 stars from my previous reads to the full five.

MYSTERY WALK is full of hope but at the same time does not shy away at all from the difficulties in life we all face. The wonderful prose of Robert McCammon is only improved by Nick Sullivan's narration. If you're in need of a little hope in your life during these difficult times, then I highly recommend giving MYSTERY WALK a listen. If you do, give Billy Creekmore a hug from me and tell him that Char said Hi.

*I received a free copy of this audiobook from the narrator, in exchange for my honest review. This is it!*

My favorite author but not McCammon's best work

i like Robert McCammon's more recent books. Boy's Life and on. but, I wanted to try some of his older stuff. It started out great and slowly grew more and more convoluted. Became unnecessarily complicated and I started losing interest in the last 3rd of the book

Where does Mystery Walk rank among all the audiobooks you’ve listened to so far?

One of my Favorites!

Billy Creekmore is a captivating character and easy to root for. My heart broke for him more than once as he learns how to live with his special abilities, as well as deal with the small town racism and evangelical fanaticism present not only in Hawthorne, but in his own family. Other parts of this thrilling tale left me on the edge of my seat as Billy has to fight for his life against the Evil that wants to destroy him because of his gift.

Nick Sullivan does a phenomenal job narrating this book. I was so absorbed in the story that I felt as if each person talking was actually a different person instead of one person reading it. Not an easy task for a narrator to accomplish!

Mystery Walk is a sublime coming of age tale set against the backdrop of the south in the late ‘50’s and early 1960’s. Billy Creekmore is a captivating character and easy to root for. My heart broke for him more than once as he learns how to live with his special abilities, as well as deal with the small town racism and evangelical fanaticism present not only in Hawthorne, but in his own family. Other parts of this thrilling tale left me on the edge of my seat as Billy has to fight for his life against the Evil that wants to destroy him because of his gift. Wayne Falconer is a character that I loved to hate. He’s spoiled, judgmental, and weak, but he’s also someone who I feel sorry for. I was drawn deeper and deeper into this gripping tale of good vs. evil as these two boys lives intertwine and impact each other in horrific ways. Nick Sullivan does a phenomenal job narrating this book. I was so absorbed in the story that I felt as if each person talking was actually a different person instead of one person reading it. Not an easy task for a narrator to accomplish! I highly recommend this totally engrossing 5 star book, both in print and in audiobook format.

Hardy stands up to the Corbett series

Predictable and a narrator that just isn't good and seems overly dramatic. Its length is its best value.

Not my favorite of McCammon's but still worth the buy. Not loving choice of narrator. He was good, but it sounds like a 50's radio reading or a narrator of a documentary. it's more like someone is reading a book to me rather than draw me in. then there's grandmother. Once I thought about the similarity to Barney Fife I couldn't go back. for the rest of the book I unintentionally pictured ole Barney.

A Walk on the Wilder Side

Even the most humble of folks live lives full of mystery and significance. McCammon explores possibilities for one such family who is open to the “other.” Nicely done study of the fight between good and evil.