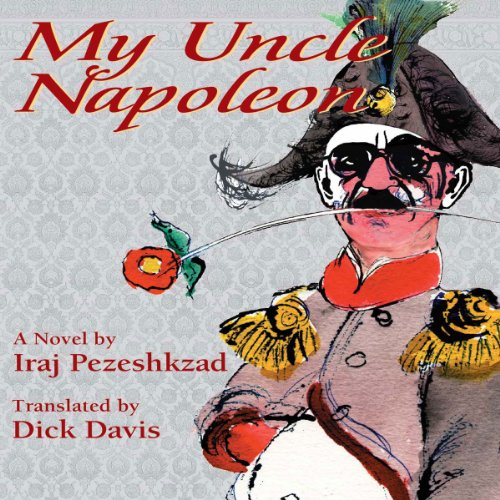 "The existence in Persian literature of a full-scale, abundantly inventive comic novel that involves a gallery of varied and highly memorable characters, not to mention scenes of hilarious farcical mayhem, may come as a surprise to a Western audience used to associating Iran with all that is in their eyes dour, dire and dreadful." (From the Preface)

Set in a garden in Tehran in the early 1940s, where three families live under the tyranny of a paranoid patriarch, My Uncle Napoleon is a rich, comic and brilliantly on-target send-up of Iranian society. The novel is, at its core, a love story. But the young narrator's delicate and pure love for his cousin Layli is constantly jeopardized by an unforgettable cast of family members and the hilarious mayhem of their intrigues and machinations. It is also a social satire, a lampooning of the widespread Iranian belief that foreigners (particularly the British) are responsible for events that occurs in Iran. But most of all it is a very enjoyable, often side-splitting read that you wish did not have to end. First published in Iran in the early 1970s, the novel became an all-time best-seller. In 1976 it was turned into a television series and immediately captured the imagination of the whole nation-its story became a cultural reference point and its characters national icons. Dick Davis' superb English translation has not only captured the uproarious humor of the original but has also caught the delicate, underlying vibrancy of the Persian.

An Iran we never knew

This is a rather dated, but still charmingly funny farce that takes place in Iran in the 1940's. The petty doings of a minor aristocracy is narrated by the least beloved, adolescent nephew of Dear Uncle Napoleon, the wildly self aggrandizing patriarch of the family. The narrator has fallen hopelessly in love with the daughter of "Dear Uncle".
I thoroughly enjoyed listening to it, even though the glimpse into the people and society of the time was compared by someone as like "I Love Lucy" in its accuracy. But it is a farce and as such is completely understandable and interesting. I recommend it to anyone who enjoys reading off the beaten track.

Translated with incredible accuracy and narrated so closely to the original Persian television shows characters’ and their over the top personalities that it’s hard to not imagine them speaking instead of Moti Margolin. I loved every minute of this and can’t recommend it enough.

A funny and engaging window into Iranian culture. It is a delight to listen to

Very funny. The slow motion of the story will not be to everyone's taste but I thoroughly enjoyed it. The characters I got to know in this novel will stay with me for a long time.

A Special Story and Fun Read

I decided to listen to this book on a whim. At first I wasn't sure I would be able to get into it but after a while it became just downright fun. A good story for those of us who think of Iran as a scary place. Loved the performer.

Was not culturally relevant

I expected something more culturally explicit. It is absolutely an adolescent's book but lacks any real teaching about Iran.