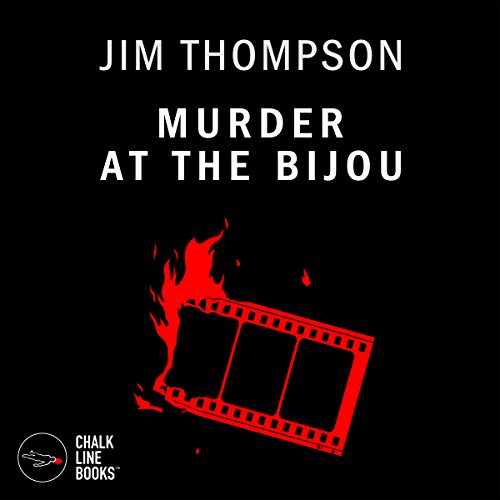 Murder at the Bijou

Murder at the Bijou (originally titled Nothing More Than Murder) is noir master Jim Thompson's dizzying tale of deception, adultery, revenge, arson, and cold-blooded murder in Smalltown, U.S.A., Thompson's favorite setting. In this novel, Thompson's first major success as a pulp fiction writer, Joe Wilmot, trying to go straight after a stretch in the pen, finds a movie house in a small crossroads that can use a helping hand and someone with half a brain for business. The theater's owner, Elizabeth, isn't the smartest operator around - or is she? Joe and the plain Jane Elizabeth decide maybe it would be better for business if they got married. Why not? And then Carol shows up, a bit stale in the eye candy department but ready and willing to serve - in every way.

They've got insurance coverage on the movie house; their lives would all be better if the place maybe had an accident, a little fire. But things can go very wrong. And in Murder at the Bijou they do.

Fans of Jim Thompson will recognize the terse dialogue, plot twists and double-crosses, and a belief that nothing in the world is good, all of which makes Stephen King say that Jim Thompson is "My favorite crime novelist - often imitated but never duplicated."

Murder At The Bijou

Where does Murder at the Bijou rank among all the audiobooks you’ve listened to so far?

Only heard 2, this was 2nd best to The Killing

Have you listened to any of Mike Dennis’s other performances before? How does this one compare?

Listened to 1 other and both had excellent narration.

What made the experience of listening to Murder at the Bijou the most enjoyable?

Murder at the Bijou is a story based in the 40's, where Joe Wilmot runs a cheap yet popular movie show in his small town. Since a noir novel always involves villians and damsels in distress, Joe has a lover in addiition to his homely wife as well as a millionaire competitor angling for his share of the theatre business. Hilarity ensues when there is murder, bribery, and double cross left and right.

Surprise ending! Thought I had it in the bag when in reality no one could have predicted this ending.

Have you listened to any of Mike Dennis’s other performances before? How does this one compare?

I have listened to and will continue to listen to Mike Dennis' performances. He has a perfect voice for noir.

I laughed through the entire book--it was so visual for me. I pictured black and white characters in hats and rain coats and 40's era swing skirt dresses and pumps.

The start of a legend career

Where does Murder at the Bijou rank among all the audiobooks you’ve listened to so far?

The whole twist at the end

Listen to how it all started from one of the masters of dark voice and evil humans well worth to have in your library.

Sorry, but I just couldn't get into it.

Better narration, a bit more excitement during the story.

What was most disappointing about Jim Thompson’s story?

It was boring. A story that should have been very exciting was just flat and long drawn out.

It was a murder mystery so I had to listen all the way through to find out the truth. But it was very difficult.