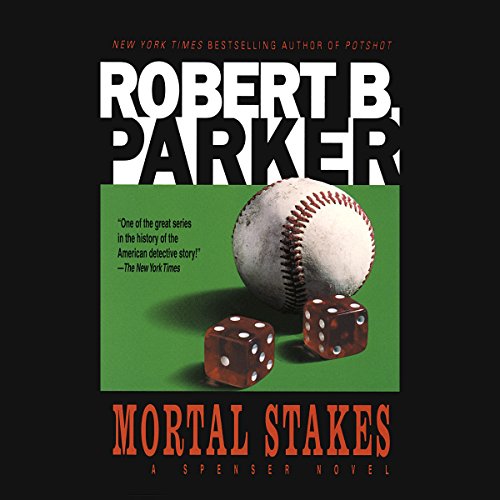 Everybody loves a winner, and the Rabbs are major league. Marty is the Red Sox star pitcher, Linda the loving wife. She loves everyone except the blackmailer out to wreck her life.

Is Marty throwing fast balls or throwing games? It doesn't take long for Spenser to link Marty's performance with Linda's past...or to find himself trapped between a crazed racketeer and an enforcer toting an M-16.

America's favorite pastime has suddenly become a very dangerous sport, and one wrong move means strike three, with Spenser out for good!

Third Book in Series: Almost There

None of the characters are quite yet what they will be. And no Hawk yet.

But still, the story dealing with possible pro sports cheating is very good, and some stellar moments.

A ways to go yet until it will become what it needs to.

If you haven't yet started the series, this book might be better than the previous two to begin. But later books are even better.

What a Man's Gotta Do

The Spenser books, particularly the early ones, are good, fast reads and very short by today's standards. Although technically book #3, "Mortal Stakes" (1975) is a good starting place for this classic series.

On the surface it's a simple story: the Boston Red Sox' manager suspects that their superstar may be throwing games as well as pitches (all Red Sox personnel in the book are entirely fictional). The manager hires PI Spenser to investigate the rumor. The trademark Parker descriptions of meals (heavy on the cholesterol), drinks (Labatt's Pale Ale, anyone?), clothes (lots of polyester), and local flavor (Boston's ambiance is captured nicely) are all there, as is Spenser's trademark repartee (which unfortunately doesn't always translate well to audio, especially since Michael Prichard is an OK but not spectacular reader).

Underneath a fast-moving plot involving blackmail and gambling, this novel builds the foundation for the Code of Spenser as the tough PI faces up to the physical, emotional, and spiritual conflicts inherent when "work is play for mortal stakes." At this point in the series he has not yet partnered with Hawk, the sociopath-with-integrity who plays such a large role in later books. Hit men like Vinnie and Chollo have not yet become Spenser's buddies and back-up. Cops Belson and Quirk, his stalwart links to law enforcement, are present, and the bonds of commitment between Spenser and his future soulmate Susan Silverman glimmer but are not yet forged.

Over 35 years and 30 novels (there are more than 30, but for me the books lose their lustre and originality somewhere after "Potshot," which was #28 or so), Robert B. Parker created an iconic character that in many ways (and despite many superficial differences) is the logical antecedent of Lee Child's Jack Reacher. Both "heroes" operate under individualistic codes of honor that in their world justify breaking rules and laws in the interests of eliminating evil, protecting the innocent, and righting wrongs. As the lines from Robert Frost that are the epigraph in "Mortal Stakes" sum it up, their deeds are done "for Heaven and the future's sakes." Spenser thinks about it a lot more than Reacher does, but they both wind up serving as judge, jury, and executioner more often than not.

Well written story narrated by Michael Prichard, one of my favorite narrators. In this Spencer story you get the action and mystery but you also get a little insight into what kind of man Spenser is, what makes him who he is. I love this series and highly recommend this story.

Spenser is my hero. I loved it.

Robert Parker weaves a tale of intrigue and fast paced detective work. Keeps you coming back for more. Holds you till the very last word.

This is my second Spencer book. As the first, the story is pretty simple. Not many plot twists.

The performance however was dry and robot like. No emotion. Delivery was dry and monotone.

Will not listen to another book in this series if the same performer is reading.

I’m a long time fan of Robert Parker. I am not sure if I missed this one when I started his Spencer series but it was wonderful hearing it again. The narrator was easy to listen to and brought Spencer to life.

Excellent book. Spencer at his best! Cant wait to read the next book in the series! Excellent performance!

A Spencer novel - gotta be okay

The Spencer series is about a private detective and his friends. It is excellent. This book is not one of the better ones, but it is still very good because Spencer is in it.

The story was good. A little too predictable. I like the old style detective narrative like the classics; however he can get a little bogged down in some descriptions and commenting especially about extraneous details such as clothing. Doing it every once in awhile adds to the flavor, doing it every time can be tedious. Narrator does a good job of separating voices and has a pleasant voice.

The best one so far

This is my third book by Parker and he just keeps getting better, the characters have become deeper and fleshed out. The story had layers and I will read more of Parker.