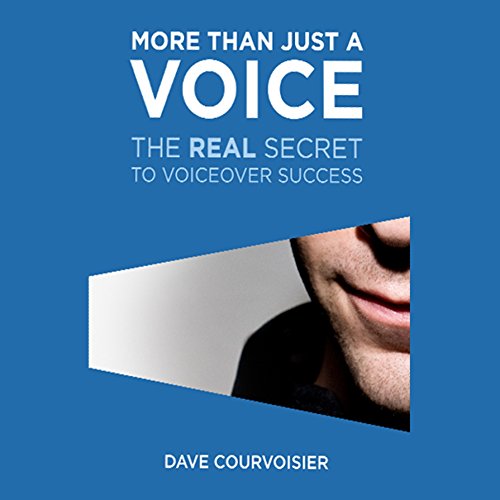 More than Just a Voice

Once a week, on average, I get a call from someone with a "really nice voice". He (or she) has been told by co-workers, friends, and family so many times that he has a terrific voice that he can't ignore it any more. His call to me is a first step in what he hopes will be a lucrative career in voice acting. Why me? Because I'm a well-known voice actor, and I have worked hard to gain that reputation.

In seven years of blogging only to the community of voice actors, specifically on the subject of voice acting, I've educated myself and others on the challenges of being a freelance voice artist. My first diplomatic answer to my caller is: being a success in voice acting requires more than just a voice. I've had to gingerly explain the real secret to voiceover success so often that it became clear: somebody needed to tell the truth about being a voice-actor. It's hard work! It's a business and should be approached as a business. It takes more than just a voice.

By my best ballpark estimate: a good voice will get you about a 10th of a mile down the road of voice-over success. In fact, in the first chapter of More Than Just a Voice: The Real Secret to Voiceover Success, you'll hear me ask: "How well do you handle rejection, even when you know you're better than the competition?" and states, "Accept that growing opportunities are counter-balanced by declining compensations and increasing competition."

There is no other voice-over book on the market with more practical advice than this book: The first section of the book gets right to the heart of the matter with some of the nuts 'n' bolts of the business of voiceovers:

A Goldmine of Voiceover Information!

"More Than Just a Voice" isn't just a book, it's an entire course on everything you could ever want to know about how to be a successful voice actor. I can't imagine how much time it must have taken Dave Courvoisier to compile all the information, lists, links and other great data within this book. He could have charged $1000 and it would have been worth it!

What was one of the most memorable moments of More than Just a Voice?

Can't name just one... every part of it was engaging and memorable.

Which character – as performed by Dave Courvoisier – was your favorite?

Whether your a new voiceover artist or long-time veteran, there is information in the book that you NEED. I highly recommend it!

2014 vintage, but don't be put off for that: Dave Courvoisier's labour-of-love audiobook is 'paying it forward' par excellence.

Wow. 77 chapters (thankfully, bite-sized and ideal coffee break material) of advice, links, contacts and recommendations from a Jedi Master of the voiceover industry, and free of padding or waffle.

Thank you, Dave Courvoisier - impressive and inspiring stuff, and a cinch to recommend to aspiring voiceover talents.

The audio book is broken up in small small sections and has no real strong cohesion. If you are looking to learn how to voice act, this is definitely not the book for that. He spends almost 80% of the time talking about how to get work and 20% of the time who or where you should look.

This book is so helpful that I joined the WOVO community for Voice Actors. Dave is so generous with his life experience as a voice actor. The information contained in this book is a Course long curriculum that could be taught at a formal school.
I appreciated the information so much that I reached out to him directly to Thank him.
I have shared this book with several people new to voice over and they enjoyed it immensely.
Thank-you very much.

Very easy to understand and hear.
Grasped concept of each explanation very well!
Thank you

Note: This Review was written by Michael Howard. My wife started the account, so it's in her name.

I just entered the Voice Over (VO) field and I wanted to listen to a book that would not just give me a few fundamentals just to lead me to subscribe an author's "Best You Can Get" Training. I wanted to learn the most important Fundamentals of Voice Acting, and I also wanted to gain knowledge of helpful Resources. I got All of that from Dave's book.

One thing that really stood out to me was that Dave, or "CourVO," as he refers to himself to make it easier for listeners, was that he explains Why he feels each resource he mentions can be helpful to a VO Artist. That, along with his very professional, yet pleasant and sometimes humorous delivery, is what put this book at The Top of my list for VO Resources for beginners.

I want to close by saying that just because I'm new to Voice Over doesn't mean that VO Pros can't or won't get the same amount of satisfaction from this Audio Book. If you research CourVO, as I did, before and after I listened to More Than Just A Voice, you will see that Dave has a very long and very successful career in Voice Over and he shares personal stories, not just generalities, of things he did, and still does, to be a star in the industry.

I am considering going into this line of work, currently doing my homework on every level.

I loved listening to this book. It is full of vital information, so much so, you need the hard copy or you'll be stopping the recording repeatedly to write down what he says. He is a wealth of resources.

This could be the most valuable combination of a practical roadmap and a usable ready reference for the VOICE over business. Packed with tips and deep resources only an insider can share. Excellent! Thank you.

this book did not contain anything helpful. I fail to see how "scheduling your sleep" and "proper telephone etiquette" have any business in a book about vo (those things are important in life, but this book is supposed to be about vo!). it is basically a how to start a generic business/be a normal person book with random vo keywords thrown in. don't waste your time or $.