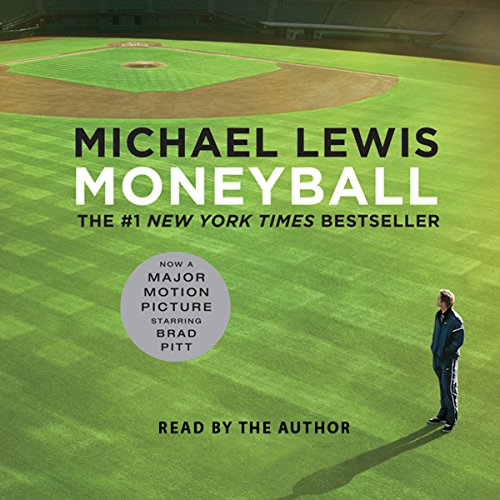 "I wrote this book because I fell in love with a story." But the idea for the book came well before I had good reason to write it - before I had a story to fall in love with. It began, really, with an innocent question: how did one of the poorest teams in baseball, the Oakland Athletics, win so many games?

With these words Michael Lewis launches us into the funniest, smartest, and most contrarian book since, well, since Liar's Poker. Moneyball is a quest for something as elusive as the Holy Grail, something that money apparently can't buy: the secret of success in baseball. The logical places to look would be the front offices of major league teams, and the dugouts. But the real jackpot is a cache of numbers collected over the years by a strange brotherhood of amateur baseball enthusiasts: software engineers, statisticians, Wall Street analysts, lawyers and physics professors.

These numbers prove that the traditional yardsticks of success for players and teams are fatally flawed. This information has been around for years, and nobody paid it any mind. And then came Billy Beane, General Manager of the Oakland Athletics. Billy paid attention to those numbers, and this book records his astonishing experiment in finding and fielding a team that nobody else wanted.

In a narrative full of fabulous characters and brilliant excursions into the unexpected, Michael Lewis shows us how and why the new baseball knowledge works. He also sets up a sly and hilarious morality tale: Big Money, like Goliath, is always supposed to win...how can we not cheer for David?

"[An] ebullient, invigorating account of how an unconventional general manger named Billy Beane rebuilt the A's, a team with the second lowest payroll in baseball, into a team that won 103 games last year - as many as the filthy-rich Yankees." ( Time)
"You need know absolutely nothing about baseball to appreciate the wit, snap, economy and incisiveness of his thoughts about it." ( The New York Times)
"Lewis's reading is excellent....Not just for baseball fans, this story will impress anyone who understands that the way things are done can always be improved." ( AudioFile)

I could say this was the best non-fiction book I've heard or even the best sports story I've heard (surpassing the thrilling Seabiscuit) but it would be more accurate to say simply the best book fiction or non-fiction I've heard. It is a book where the human interest story far surpasses the sports or business themes to create an appeal for a broad range of listeners. I simply could not stop listening to this book until I finished it. By the way I've listened to more than 30 audible books in the past 2 years.

Made me fall in love with baseball again

I listened to this book, and now I can't shut up about it...full of invigorating details, Moneyball confirms the deeply held suspicions most of us have about how to run not just a baseball team, but a business, or maybe a life: that a lot of 'received wisdom' is a lot of crap, and that a maverick who sticks to his guns can do it better than the Old Boys Club. Just knowing that there is a Billy Beane out there, looking for the things that everyone else overlooks, watching out for unappreciated talents and misfits...it's enough to make me start happily scrutinizing the sports page like I haven't done since I was a kid. To anyone that feels undervalued in your job, your life: listen to this book, and listen to the story of Scott Hatteberg.

This is an excellent book, especially (but not necessarily) if you really like baseball. Even a casual fan, or an intellectually-minded business person, will find this book interesting. It's all about abandoning preconceived notions and focusing on the facts in front of your nose - even when everyone is trying to distract you (or is actively working against you). Then, execute. If you do the right thing long enough, you'll be a success. It's a David and Goliath story. Just imagine if there had been a Billy Beane around to save the Roman Empire, for example (okay, that's a stretch). All that said, however, I feel the book suffers greatly by being abridged. In fairness, I dislike abridgments in general, especially non-fiction abridgments. If the author and editors decided that the words should be there in the first place, why mess with it. I encourage everyone to boycott abridgments on general principles. It may be okay for the odd second-rate thrill novel, but I don't understand abridging a work of non-fiction. Nevertheless, I still recommend this production of Moneyball, but I will purchase the unabridged version when it becomes available, and enjoy this story all over again, the way it was meant to be heard.

This is a great story about a maverick underdog winning against all odds. It is entertaining, educational, funny, and smart. Did I mention well written? Well read? It is also a great business book.

Being new to Audible, this was the first Audiobook I have listened to the whole way through, which I did in only a couple days because it is so good. Michael Lewis' keen observations go well beyond the sport of Baseball; indeed the science of human misjudgement, its victims, and the issues which those who expoit it face are absolutely fascinating. I dont follow baseball, nor have I played (I got the book because I liked Liar's Poker so much), but was completely blown away by Lewis' amazing ability to get to the heart of an issue & enthrall with a story about a sport which was previously off my radar. One of the best non-fiction books I have ever read.

Excellent book but it is

This book has got me interested in Baseball again! If you find different management styles interesting, if you enjoy the success of the unconventional, if you like thinking outside of the box this is a must read. The narrator who is also the author is very good. The only problem I found with this listen is that it is abridged! Why cant Audible's default format be unabridged as opposed to abridged? Because this was such a good listen I feel a bit cheated. Hopefully the author/narrator did a good job in abridging the book, but how do you know? Problem is that now I have to go buy the book to see what I missed. The whole idea of listening to the book is to save time...come on Audible do what is right.

If you listen to this book with an open mind it should open you up to a world of objective thinking in sports. It's no fluke what A's General Manager Billy Beane has done with a puny payroll. Michael Lewis has a tremendous ability to describe mundane topics in such a way as to make them exciting. Because of this, Moneyball is a great book for anyone with the slightest interest in either sports or business. Highly recommended read (or listen).

I couldn't care a hoot about baseball, but after this book, i find a part of it to be fascinating. To do that takes very good writing.

Why you study math to do well in sports

This is a most interesting book of how the use of something you learn in school can be the key to success in professional sports. The book tells the story of how one team (actually one person) used a statistical analysis to predict which players would be the 'best buy' for the team. If you hate math, don't go away - the author provides very little information on how the math is done - only that it is done and how the approach differs from the old baseball scout 'see 'em with your own eyes' method. Makes you wonder why all teams don't do this...the only dissappoint is that if you are more interested in how it is done, there is no hint or references on exactly how they did the analysis-but this aspect is likely too boring for most, but a reference would have been great.

Not just about stats

I expected that this would be a book of stats and how Billy Beane used stats to make the A's great. It does include those, but the whole of the book is a lot more. The point of Moneyball is to get the greatest value out of those players that others had undervalued. So Lewis takes us through one story after another of players who were outcasts on other teams, because they didn't fit the protypical baseball mold, but paid dividends for the A's.

The book is good and the audio is well done. My only gripe is that the book threw in unnecessary profanity and even promotes it as manly -- at least according to the coach/minister of the relief pitcher mentioned.