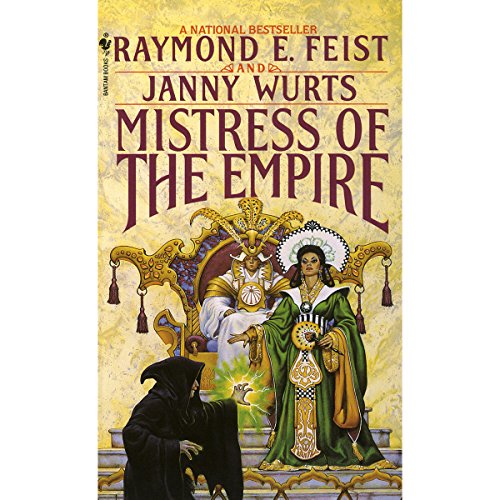 Mistress of the Empire

The world on the other side of the rift: Kelewan, a land seething with political intrigue and deadly conspiracies. Following the opulent panoply of Daughter of the Empire and the dazzling pageantry of Servant of the Empire comes the resounding conclusion to the Empire trilogy.

Besieged by spies and rival houses, stalked by a secret and merciless brotherhood of assassins, the brilliant Lady Mara of the Acoma faces the most deadly challenge she has ever known. The fearsome Black Robes see Mara as the ultimate threat to their ancient power. In search of allies who will join her against them, Mara must travel beyond civilization's borders and even into the hives of the alien cho-ja. As those near and dear to her fall victim to many enemies, Mara cries out for vengeance. Drawing on all of her courage and guile, she prepares to fight her greatest battle of all - for her life, her home, and the Empire itself.

"I enjoyed [ Mistress Of The Empire ] enormously...I particularly enjoyed Mara's adventures in the land outside the Empire." (Robert Gellis, author of Masques of Gold and Fires of Winter)

I've read these books when they were first published and the Audible versions do not disappoint! Mara of the Acoma is one of the most intriguing characters I've ever encountered. Her Spy Master Arakasi is a delight and the world building of Kelewan reminds me so much of Clavell's 'Shogun'. This is a worthy trilogy that stands the test of time!

Awesome book but a LOT of words mispronounced.

I love this book. I've read it a few times and decided I would get this version for road trips. I'm amazed at how many words were mispronounced. I don't mean character names or words in a fictional language that are open to interpretation; I mean normal English words that have definite correct and incorrect pronunciation. it was distracting, became frustrating, ultimately a bit disgruntling.

A story of sorrow, triumph and depth. well written and masterfully narrated. well worth the time to become a favorite!

My favorite series of all time.

I read this series many times in print when I was younger and am now delighted I can listen to it as an adult.

Excellent writing and story that still need to be lived today. Living for others and not our own selfish pride and ambition is something those in positions of leadership/governering would benefit from adhering to

For the good of the Empire!

I loved this trilogy. It is a bit of a departure from traditional fantasy. More cultural and political that most. The details made it interesting.

I’m not crying with joy as I type this.

I’m thunderstruck by the emotional attachment I have come to have with Mara and this series of books. I’ve read hundreds over my lifetime and never have I been so emotionally invested in a character. I can’t stop crying with tears of joy. This book is riveting. If you enjoy fantasy please do yourself a favor and read these 3 books. Now I have to send the author a lm email and thank him for this gift. I though Pug with the best character.........baby, I was so wrong. 10 Stars ⭐️
AMAZING!!!!!!!!

this books surprised me. i was expecting more of Pug and hia fellows at the tale, but Mara an Kevin got all my attentio and now i want to knwon more of them. i couldnt stop till the last book was finished. brilliant.

Very well executed conclusion to a series within a series. Like a rollercoaster of hope and desperation it's a wild ride.

good end to this trilogy

A little drawn out, but overall a good yet predictable ending, if you've made it this far in the story I think you will be satisfied.