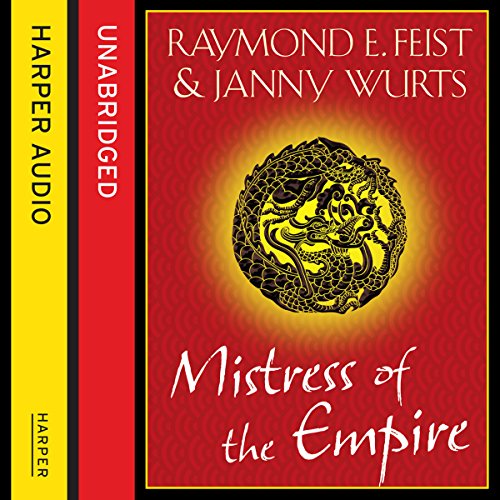 Mistress of the Empire

Book three in the magnificent Empire Trilogy by best-selling authors Raymond E. Feist and Janny Wurts. Welcome to the final play of the game. Now revered as the Servant of the Empire, Mara of the Acoma is in more danger than ever before. Not only does she face threats from the brotherhood of assassins and the cunning spies of rival ruling houses, but she has attracted the attention of the awesome Assembly of Magicians, who see her as a threat to their power.

But Mara has not reached her position through luck or accident of fate. Surrounded on all sides by enemies determined to bring her down, Mara must draw on her deepest resources to secure her place as Mistress of the Empire once and for all.

Mistress of the Empire is the stunning final book in Feist and Wurts' epic trilogy - one of the most successful fantasy collaborations of all time.

Tania Rodrigues does an amazing job bringing Mara and her world to life. One of the most emotional endings to any but Magicians's end.

Finale in an epic trilogy

Mistress of the empire is the third book in the Empire trilogy by Janny Wurts and Raymond E Feist, two epic writers in my view.

Mara’s enemies plot revenge against her and her family. Although Mara survives, some of her loved ones don’t. Her spymaster plays a key role in this book. While Mara travels to gain further alliances, her enemies grow and fear her change to the traditional ways.

The way the story was written, the unravelling story, the battle to overcome the assembly, all come together in this grand finale. I absolutely loved this story and the clever way the book was written. I enjoyed the series, the way it was written, as well as the characters.

The narrator was brilliant and I thoroughly enjoyed her performance.

I highly recommend this amazing trilogy.

I love the twisting turning plots and fullness

Characters are fully developed, the shadings of personality are complex just as each of us is. The plots has subtle twists and divergence just as you think you see the whole picture you realize that there is still more to consider. I have listened to it twice and know I will need to listen to the entire Rift War series again as it's going to be with a keener ear to put deeper nuances on some events.
Such a pleasure.
I would love to hear the series redone with a group of narrators for the various main characters and an overall narrator for sub characters and main story.
Thanks awfully for such an awesome saga.

Sadly this audiobook is faulty. A couple of places it skips back to play the same section again, as well as some audio quality problems