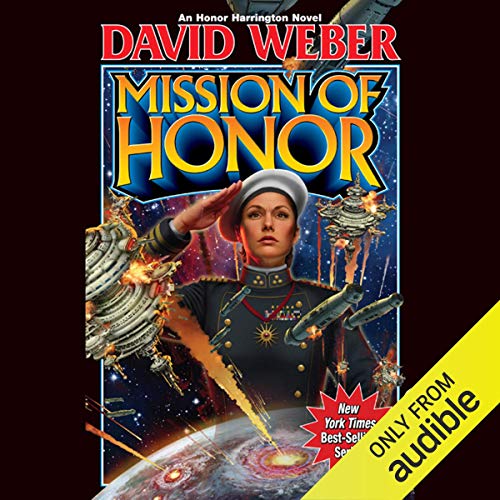 The Star Kingdom of Manticore and the Republic of Haven have been enemies for Honor Harrington's entire life, and she has paid a price for the victories she's achieved in that conflict. And now the unstoppable juggernaut of the mighty Solarian League is on a collision course with Manticore. The millions who have already died may have been only a foretaste of the billions of casualties just over the horizon, and Honor sees it coming.

She's prepared to do anything, risk anything, to stop it, and she has a plan that may finally bring an end to the Havenite Wars and give even the Solarian League pause. But there are things not even Honor knows about. There are forces in play, hidden enemies in motion, all converging on the Star Kingdom of Manticore to crush the very life out of it, and Honor's worst nightmares fall short of the oncoming reality. But Manticore's enemies may not have thought of everything after all. Because if everything Honor Harrington loves is going down to destruction, it won't be going alone.

A Note from Author David Weber
There’s been some confusion—not to say, um, energetic debate, readers and fans being readers and fans—about the correct pronunciation of “Manticoran.” The truth, alas, is that a stitch was dropped. An error occurred. A mistake was made... and it wasn’t Audible’s fault. It was mine. Before Audible recorded the very first Honor Harrington book, narrator Allyson Johnson and I not only corresponded by e-mail but actually spoke to one another by phone. She wanted to make absolutely certain she had the correct pronunciations for names, places, star nations, etc., and I tried to make certain all of her questions were answered. And so they were. Unfortunately, at some point in the process, I replied to one of her e-mails by telling her that “Man-ti-core-ahn” was pronounced “Man-tik-er-ahn.” Exactly how this happened is more than I can say at this point, except to blushingly disclose that the original e-mail remains intact, confirming to all the world that it was, indeed, my fault. I can ascribe it only to a temporary mental hiccup on my part and crave your forgiveness. If, however, you must blame someone for the mix-up, that someone should be me and not Audible, who have done everything they could to get it right.

“Fans of this venerable space opera will rejoice to see Honor back in action.” ( Publishers Weekly)

First of all I want to say that I have loved all of the authors books and it is likly that I have read or listened to them all. I was looking forward to this book so much that instead of waiting for a credit to be applied I used cash. I regret it so much that had I purchused the book in a book store I would have brought it back for a refund.
The monolog and descripitions when on so long that I found myself getting very angry and turning off the book to keep from throwing it out the window. Very little of the very long monologs had any character or plot building elements. The sole purpose must have been to add word count. I will not buy any more of Webers books

Its been a long wait for Honor to return and it was well worth the wait.
A group of new villians, really made the grade, they are down right despicable. I've listened to the book completely twice, seems a tad short, not too long at all, but I do like alot of detail. Bring on The Sollies. Cannot wait for the next installment of this fine series. I was a bit suprised there was not a bit more from the Grayson side of things, But alot of new direction to the new bad guys made up for that. It was a good follow up to At All Costs.

a great instalment in the Honor Harrington series, or at this point the "honorverse". This book ties up a large number of loose ends as well as moving the story along to what will be its ultimate finale. David can't write fast enough for me.
you have space battles politics and all the things you love about davids writing here. enjoy

"Pride goes before a fall"

First time in 400 year history of Manticore, foreign star nation have attacked the home fleet.
Millions of lives lost at least 350 ships of the wall and screen were destroyed it was the greatest battle in modern history.

Home fleet is completely destroyed third fleet is unsalvageable, only 8th fleet under the command of Fleet Admiral Honor Harrington stands between Star Empire of Manticore and it's destruction, let's hope it will be enough.

Meanwhile in Talbot cluster (Quadrant) 10th fleet under command of Admiral Michelle Henke also have to get it's hands dirty.
The exchange of fire between Manticoran ships and SLN, first time in 300 years SLN ship was destroyed in battle
Solarian League Navy (SLN) The biggest, The most Powerful, The most modern Navy in human history, OR IS IT ?!

More than twenty years of war "War of Annihilation" between Manticore and PRH, twenty years of battle hardened training and professionalism , twenty years during which R&D on both sides
was working like mad to overcome enemy's technological superiority, Twenty years in which tactical doctrine have completely changed , the time in which LAC became as powerful as old time Destroyer, the time in which FTL communication became a norm of warfare and even some civilian operations. The Royal Manticoran Navy Changed.
IS IT REALLY JUST NEO-BARBARIAN VERGE NAVY?

Over this same Twenty years PRH political system have completely changed or perhaps it was taken back to it's root
Legislaturalists are no longer in power, neither is Tyrannical rule of Rob S. Pierre, and Dictatorship of Oscar Saint-Just was also overthrown. First time in two hundred years People Republic Haven is a Democracy.

And agian Status change:
PRH is in turmoil sneak attack on Manticoran star system failed, raids by 8th fleet completely destroyed infrastructure of 8 star systems, with the loss of units during Operation "BEATRICE" fleet is decimated, and it was all their own fault!!!!!

NEXT BOOK IS " A Rising Thunder"

Seem when I start a book in the Honor series everything comes to a stop as I can not stop listening until the book is finished. Allyson Johnson does a good job narrating the book. At times information was repeated as it was relayed from one person to another but the suspense was great. There were a few exciting space battles for which Weber is famous. The political drama was intense between Manticore and Haven. The book created an end to the story of all the past books and sets the ground work for a new story line. Can not wait for the next book. I will now start on all the sub-series I can obtain and hope Audible will carry all of them.

Good book in line with the whole series. Weber is his usual self. Since I skipped the recent non-Honor stories (don't care for the spinoffs) I was quite lost at first since this builds more off them than it does off the last Honor book (At all Costs).

I really don't like the narrator's nasal voice and the mushy way she slurs words into each other. Her British and French accents however are great, though sometimes they seem to slip.

At first I was having trouble with the series. It seemed like it was getting too deep into everything but as I got farther into the series, the better I liked it. The narrator slipped from time to time on the gender of the characters but all in all once I got used to her it was fine. I'm looking forward to getting more of Webers books.

I have enjoyed the Honor Harrington series for a long time. I do not know how many of these ebooks I have -- but a lot. I also enjoy David Weber's writing (usually).

Having said that, this could well be the worst book to which I have listened in over a year. It is very poorly written. The ruminations of all the characters goes on for hours. Arched eyebrows are everywhere, and there is zero action.

I will admit that I stopped after eight hours. The total audiobook is about 24 hours long, but the pain was just too great.

If someone makes it to the end of this terrible book, I would just like to know (out of curiousity) if anything ever happens. I am curious, but not enough to put up with the literal physical pain of an inappropriate reader reading a poorly written book well.

Damn... Weber is getting better. This one takes the series to new places and promises much more to come. The writing is much more exciting and in audiobook form... this one is actually thrilling..... I loved it.

The only criticism I have is Allyson Johnson's inexplicable accent selection - why in the world would people coming from the same place, going to the same schools have different accents based on their ethnic backgrounds? And why would say, Abigail Hearns who comes from Grayson where people came from North America originally speak with a pseudo Irish accent?

She should correct these inconsistencies if she is going to stay on the series.

The End was to early (or to late in the book)

The plot around Manticore, Haven, the Solarian League and Mesa evolves, as Honor is sent to Haven for a diplomatic solution to end the war.
As she is busy there new problems arise in the Talbot cluster and Mesa becomes more and more active.
The End of this book was, what i hoped for the whole time, i was listening.
This only sounds a little vague, to avoid spoilers.