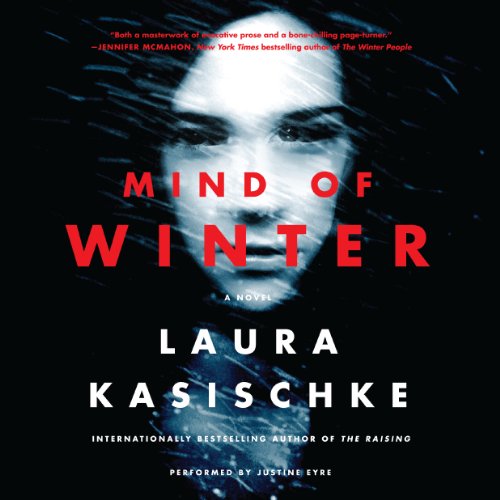 Laura Kasischke, the critically acclaimed and nationally best-selling poet and author of The Raising, returns Mind of Winter, a dark and chilling thriller that combines domestic drama with elements of psychological suspense and horror - an addictive tale of denial and guilt that is part Joyce Carol Oates and part Chris Bohjalian.

On a snowy Christmas morning, Holly Judge awakens with the fragments of a nightmare floating on the edge of her consciousness. Something followed them from Russia. Thirteen years ago, she and her husband Eric adopted baby Tatty, their pretty, black-haired Rapunzel, from the Pokrovka Orphanage #2. Now, at fifteen, Tatiana is more beautiful than ever - and disturbingly erratic.

As a blizzard rages outside, Holly and Tatiana are alone. With each passing hour, Tatiana’s mood darkens, and her behavior becomes increasingly frightening . . . until Holly finds she no longer recognizes her daughter.

I loved the book, the author is amazing and the story out of this world. But the narrators voice sounded snide and distracting.

the narrator spoke faster than most audio books which I enjoyed, but her voice was distracting. I enjoyed the book.

it could have been another book with another reader

What was most disappointing about Laura Kasischke’s story?

What character would you cut from Mind of Winter?

i'm confused by this book and don't know how to rate it. it's one of those books that i disliked and liked at the same time. without the final page, i think the book would have really disappointed me, but that little discovery at the end makes it more interesting and throws a wrench into what happens throughout the novel.

holly is a horrible mother. she's selfish and bratty and has no real redeeming qualities. but that's not what bothers me...i don't need a likeable narrator. what bothered me was that her internal dialogue (and external, for that matter) are that of a teenage girl. is that meant purposefully by the author? or is it just bad writing? i don't know and therefor i was confused.

there are a lot of inconsistencies in the book. for instance, it was clearly stated that holly didn't put her watch on, and then in the next scene she glances at her watch and winces at the time. is this meant to confuse the reader? contribute to the uneasiness happening in the house? or is it just mistakes that were overlooked by the editors? the inconsistencies seemed sloppy to me, and were never explained away at the resolution of the book -- so i think they were just errors. (there were bigger ones, but i don't want to ruin the book for anyone who reads it by giving away major plot points).

there were also a lot of unresolved issues in the novel, and that is the difference between a 2 and 3 star rating (i've fluctuated back and forth in my mind between them). why were the animals dying? why was the wallpaper peeling? there were so many things "set up" in the beginning of the novel that were never explained. it's like the author was using them as a tool to "trick" the reader, and then just ignored them at the end of the book since she changed paths with the twist ending. it seemed a little lazy to me.

overall i think the premise of the book was interesting. and the twist ending definitely stayed with me and made me think about the book more than i may have if it had a cliched ending. i mean, i didn't review it for two days after i read it because i needed to consider the book...so there is success in that, right?