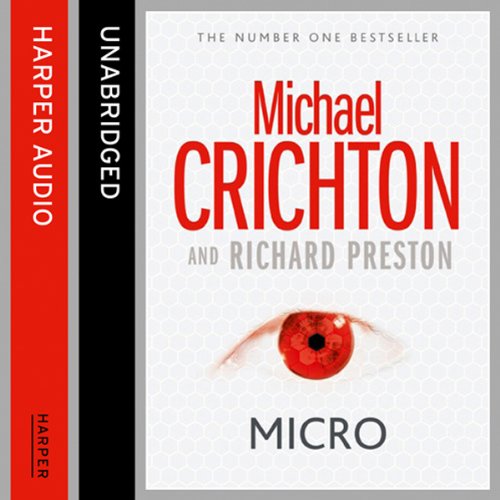 An instant classic in the vein of Jurassic Park, this boundary-pushing novel has all the hallmarks of Michael Crichton’s greatest adventures with its combination of pulse-pounding thrills, cutting-edge technology, and extraordinary research.

Three men are found dead in a locked second-floor office in Honolulu. There is no sign of struggle, though their bodies are covered in ultra-fine, razor-sharp cuts. With no evidence, the police dismiss it as a bizarre suicide pact. But the murder weapon is still in the room, almost invisible to the human eye. In Cambridge, Massachusetts, seven graduate students at the forefront of their fields are recruited by a pioneering microbiology start-up company. Nanigen MicroTechnologies sends them to a mysterious laboratory in Hawaii, where they are promised access to tools that will open up a whole new scientific frontier. But this opportunity of a lifetime will teach them the true cost of existing at the cutting-edge…The group becomes prey to a technology of radical, unimaginable power and is thrust out into the teeming rainforest. Armed only with their knowledge of the natural world, the young scientists face a hostile wilderness that threatens danger at every turn. To survive, they must harness the awe-inspiring creative – and destructive – forces of nature itself.

Does not Live up to Michael Crichton’s Standard

Unfortunately, the ‘science’ is too poorly developed and many aspects and inconsistencies in the interaction of micro-humans with the regular world remain unexplained.

The other books by Michael Crichton that I have read were always thoroughly researched and the science—even though fictional—was logical and believable.

The narrator didn’t help the story at all either. The reading was emotionless and I often got confused about which character is currently talking. The situation was made worse by the fact that the chapter marks did not match the chapters in the book.

My conclusion is that I would not recommend this book even to die-hard Crichton fans.

Crichton would have been disappointed.

This is the book Michael Crichton had supposedly partly written before he died. In reality I suspect that Crichton did no more than construct a plot outline and the book was largely the work of Preston. Like so many other books that purport to be 'co-written', it trades on the name and reputation of the established author but does not possess the quality writing that gained the author his original reputation because in actuality it has been write by someone of much lesser capability.

The plot is a great idea. It is all about a company that develops (and uses for badness and evil) a variant of nanotechnology where it actually shrinks things and people to a tiny proportion of their original size. It covers the adventures of 6 science students who discover something is wrong and are shrunk themselves and dumped in the jungle in Hawaii and their battles to survive against insects and birds (and of course, the baddies). However the characters are poor, the dialogue is atrocious and it is just badly written and presented.

I had real trouble getting past the science/hand waving going on here. And, having somehow managed to temporarily suspend disbelief, I then had great trouble with the way the antagonist went about making money from the unbelievable technology.
I know this is fiction, but the obvious comparison with Jurassic Park makes most of this plot look like something out of an Austin Powers movie.
There were some interesting ideas about life in the micro world, and some action sequences that may translate to a movie, however the edge was taken off these for me because I did not really care who lived and who died.
The narration was competent, possibly even good, however I had to listen to this at 1.5x just to get though it.

This is officially Michael Crichton's final novel, although it was actually a half finished work completed by writer Richard Preston.

The story is basically a serious take on Honey I Shrunk the Kids and for what it is, it's an action-packed and often engaging listen. The story has some plot holes, but overall if you overlook the shortcomings and perhaps the dodgy science, it's a pretty good book. Certainly it's a more engaging book than the last few Crichton novels like Airframe.

A Marathon of Concentration

Am an avid fan of Michael Connolly but he tested me to the limit with this one. I'm sure I wouldn't have lasted the distance if reading but Mr Lloyd's smooth narration kept me on course. I imagine a 3D movie is already being mooted bringing to life the mini humans fighting for their lives against the dastardly villain and mother nature. Bring it on!

Makes you start to think about all the creepy-crawlies and shows how brutal nature really is - even if it looks nice. A very good "hear".