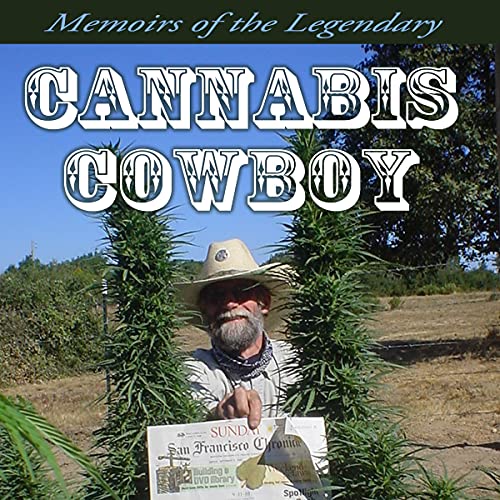 Memoirs of the Legendary Cannabis Cowboy

Memoirs of the Legendary Cannabis Cowboy is an action-packed story about the adventures of Robert G. Schmidt as a marijuana smuggler in the '70s and '80s and then as the head proprietor of Genesis 1:29, a medical cannabis dispensary in northern California.

The riches gained during high-flying early years are lost to betrayal and prison. After a time in the grip of drug and alcohol abuse, romance brings stability that is soon interrupted by a new law that allows medical cannabis use in California.

Ex-marijuana smuggler Robert establishes Genesis 1:29 to grow and distribute medical cannabis, and for a time, business booms. Expansion of growing operations to a ranch in Sebastopol leads to a DEA raid on September 12, 2002.

I was given this audio book as a review copy.

It was interesting to hear about Robert's early years and about the rocky path of medicinal marijuana. Robert and many other like him help pave the way for the marijuana laws we currently have.

Great read. Robert has lived through stuff that is hard for most people to even believe. I actually knew Robert for years before I knew about the book. Let’s just say that Robert, Duke, Bob, the Cannabis Cowboy confirmed these stories to be true on more than one occasion without even trying. This book covers so many of the amazing experiences and work that Robert was a part of. I’ve recommended the book to a bunch of friends and family and haven’t had a negative review yet. Most people ask, “Wait, you work with this guy?!” or “You actually know him?!” Yes he is a real person and I think if we twist his arm we may even be able to get a part 2 of the book. The Memoirs of the Cannabis Cowboy obviously covers his life to date, but I think there are some pieces of stories that may require a “rated R” version to cover.

Great book. I couldn't put it down at times!

what a great book. It's full of adventure, triumph, And heartbreak. The tails of the smuggling days kept me on the edge of my seat. There were alot of dangerous situations on the boats and plane. I felt it was sad that the Columbian people suffered such atrocities over cannabis. I loved the realness and true life lessons the book spoke of. It painted a very informative picture of the Department of justice and the DEA agents. The corruption was endless. Everything from stealing money, cannabis and his personal knife collection . It was interesting that they took his application and $800 dollars but never granted his license. Cannabis has come a long way from the prohabition days. Robert is a true pioneer, leading the way for the legalization of medical cannabis.He gave everything he had to help sick and dieing people. His life, freedom and family.