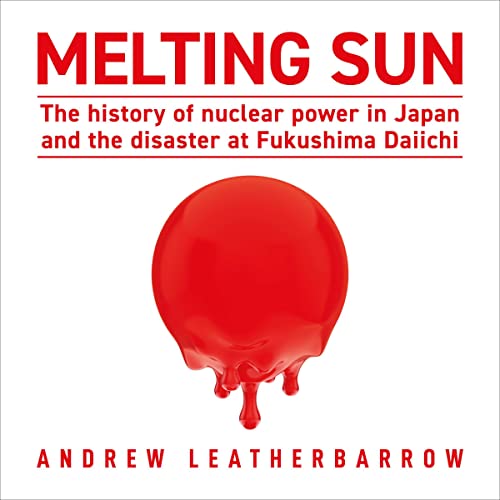 Almost 24 hours to the minute since the tsunami hit Fukushima Daiichi, Unit 1 exploded. The building wrenched apart, sending shards of irradiated concrete and metal knifing through the air in all directions. The reactor’s massive heavy-duty gantry crane bent like a twig and collapsed onto the refueling floor control room, crushing everything that wasn’t expelled in the blast. Outside, chunks of debris rained down on the fire crew, injuring five and shredding the hoses they had just laid. Among the injured was the plant’s own fire chief, whose arm snapped when a piece of steel hurtled through the window.

In March 2011, a 15-metre tsunami wiped out long stretches of Japanese coastline, killing thousands. Flooded cooling systems at the Fukushima Daiichi Nuclear Power Plant failed as hundreds of men and women battled to save three reactors from destruction in what became the most expensive industrial accident of all time.

Melting Sun spans 150 years of little-known history to retell how Japan evolved from the first victim of atomic energy to its most passionate supporter. It is a story of innovation and determination, but also of collusion, deception, overconfidence, failure, and ultimately, death. From a nuclear ship stranded at sea after leaking radiation on its maiden voyage and to the unimaginable final days of two men treated for extreme overexposure, to Fukushima itself - the only accident comparable with the infamous Chernobyl disaster.

I have worked in the US nuclear industry for a while and was always under the assumption that the Japanese nuclear industry worked with a similar safety-oriented mindset. It may be the case for the actual plant workers, but I was very surprised to learn of the bribery, corruption, and especially the Yakuza influence of the higher ups. It was eye opening. While the book didn't go into as much detail as I would have liked about the events at Fukushima Daiichi itself (which it sill had plenty of detail), what it did go into was told from a perspective of the people that were actually there and all of the politics involved that I don't get exposed to from the INPO and WANO reports. The preface going over the history of nuclear power in Japan really helps build up the foundation to understand how everything functions as well. It also does a great job of addressing many common misconceptions about what happened at the plant and during the aftermath of the disaster.

The author, in my opinion, does a very good job at remaining as neutral on the subject of nuclear power as possible. He is critical of TEPCO and the Japanese nuclear industry as a whole due to their corruption and lack of a decent safety culture while giving credit to them and their people when they made good decisions. I have been a fan of his work since reading Chernobyl 01:23:40 and am glad to see him making more quality content.

The narrator does a good job of explaining everything in a cadence and tone that kept my attention the entire time. He did mispronounce a couple of Japanese words, but the vast majority of them were correct and I know how hard that is to do. He even was able to get the pronunciation of a couple of commonly mispronounced French nuclear agencies correct, one of which I've been mispronouncing for years.

Overall, it is a great title and I highly recommend it for anyone wanting to learn the history of nuclear power in Japan, the Fukushima Daiichi disaster, and its aftermath.